It would seem that this year's North American International Auto Show in Detroit, Michigan is centered on sport utility vehicles. The attention to sports cars this year has been little, with one exception: Subaru introduced the 2004 Impreza WRX line ...

It would seem that this year's North American International Auto Show in Detroit, Michigan is centered on sport utility vehicles. The attention to sports cars this year has been little, with one exception: Subaru introduced the 2004 Impreza WRX line to North America, including the World Rally Championship-inspired WRX STi. 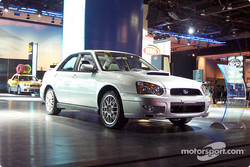 The Impreza WRX has had very successful results in the North American market since it went on sale in 2001, and has become a popular car for sports car enthusiasts due to its modest price tag and all-out performance. Membership to the Sports Car Club of America is offered to WRX buyers.

The interior is also changed to reflect the more aggressive look with a center mounted tachometer and sport bucket seats that could easily use a racing seat belt. Other features include new safety features, like pedals that brake away during a head-on collision to prevent against foot injuries. Overall, the redesign of the WRX makes it an even more appealing and safe sports car that is still affordable for all.

This year Subaru will sell the Impreza WRX STi for the first time in North America. The STi already has a global reputation for being a true rally production car. Subaru Tecnica International, the high-performance and motorsport branch of Subaru, and the World Rally Championship Subaru team worked together to produce the '04 STi. The result is one of the most pure rally inspired sports cars on the market. Built from the ground up, the STi is different from its Impreza kin.

The STi for North America will use a turbocharged and intercooled 2.5-liter DOHC boxer engine producing 300 horsepower and 300 foot-pounds of torque -- close to 30 more horsepower than the STi sold in Japan. The driver can even manually spray the intercooler with water to help keep the engine's heat down when being pushed to its limits. Only a six-speed manual transmission is used for the STi.

Handling is improved over the stock WRX with a rigid body and four-wheel independent suspension tuned for paved roads, much like the WRC Impreza's set up for paved rally stages.

Also, the STi was lowered for a better center of gravity, given a quicker steering ratio, and equipped with 17-inch wheels and Bridgestone Potenza Z-rated tires. Brembo brakes and a new ABS system help bring the STi to a quick and solid stop. The new Super Sport ABS uses electronic brake-force distribution (EBD) along with an anti-lock system to prevent understeer under braking.

Safety features include dual front airbags and side impact airbags to protect the head and chest. Three-point seat belts come standard for the STi. The seat belts have electronically triggered pre-tensioners and force limiters to keep the driver firmly in his seat. Also, an integrated roll bar is in the frame for rollover safety. 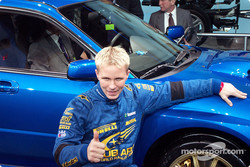 The exterior and interior for the 04' STi is also performance-oriented. The hood scoop is enlarged for increased cooling and the rear spoiler and wing combination resembles the one used on the WRC Impreza. The body uses lightweight materials when possible and the interior is sparse for weight reduction. The leather wrapped steering wheel and gearshift knob, along with a center-mounted tachometer with an adjustable red-line shift light gives the car a pure performance feel and look. The 2004 Subaru Impreza WRX STi is a great example of a rally-bred sports car and a reasonably priced high-performance car available in North America.

On hand to present the new styling of the WRX and the new WRX STi was Subaru's WRC pilot Petter Solberg, winner of the 2002 Rally of Great Britain and second place in the 2002 Drivers' Championship. Solberg was more than happy to pose with the new STi for the media, and, when congratulated on his win in Great Britain his comment was, "I do not hope this is the last one." With the start of the 2003 WRC season coming near he stands an excellent chance of having many more victories in the WRC Subaru Impreza.