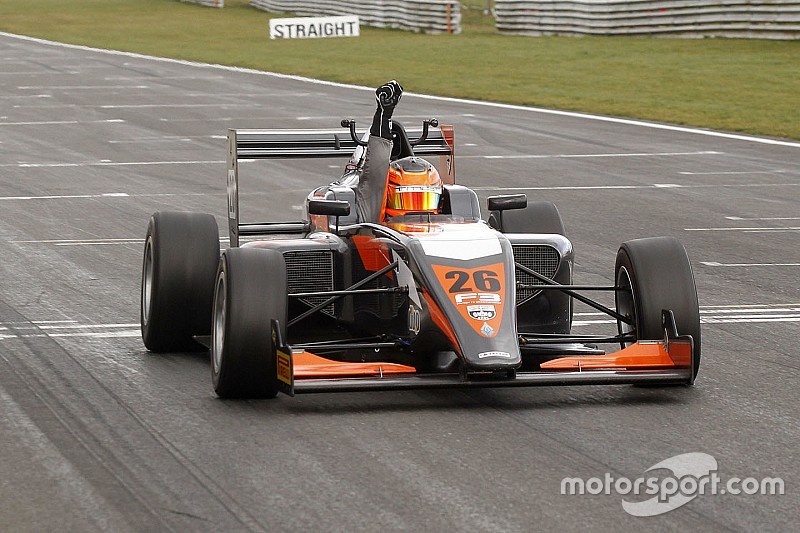 Polesitter Matheus Leist fended off Carlin’s Ricky Collard to take victory in the opening race of the second round of British Formula 3 Championship at Brands Hatch.

Although Leist appeared to have control over the proceedings, Collard often closed within half a second of the Brazilian, only for the Double R driver to further increase his advantage by going quicker.

The duo were separated by 1.7 seconds at the chequered flag after Leist picked up the pace during the last two laps of the race.

Behind, Toby Sowery took the final spot on the podium in the leading Lanan entry, having passed Raoul Hyman on the opening lap.

There was drama on the final lap as Hyman and Sisa Ngebulana went off at the Surtees corner, dropping to seventh and 12th places respectively.

The incident promoted Douglas’ Thomas Randle and the Fortec of Tarun Reddy to fourth and fifth positions respectively.

The duo had already gained multiple positions at the start of the race, having qualified on the fifth row of the grid, with Randle passing Reddy just before the last lap incident.

Meanwhile, Enzo Bortoleto finished an impressive eighth, having started from the rear of the grid in 17th place and will start race two on pole.

Al Zubair finished sixth with Thomas Maxwell and Colton Herta, who failed to set a laptime in qualifying, ending ninth and 10th.

The race was a major-blow for championship leader Enaam Ahmed, who pulled off the track while running in fifth place.

He joined Chris Dittmann Quinlan Lall, Double R’s Aleksanteri Huovinen and Akhil Rabindra (Lanan) in the list of retirees along with Ameya Vaidyanthan, who was running a fine seventh until the last lap.