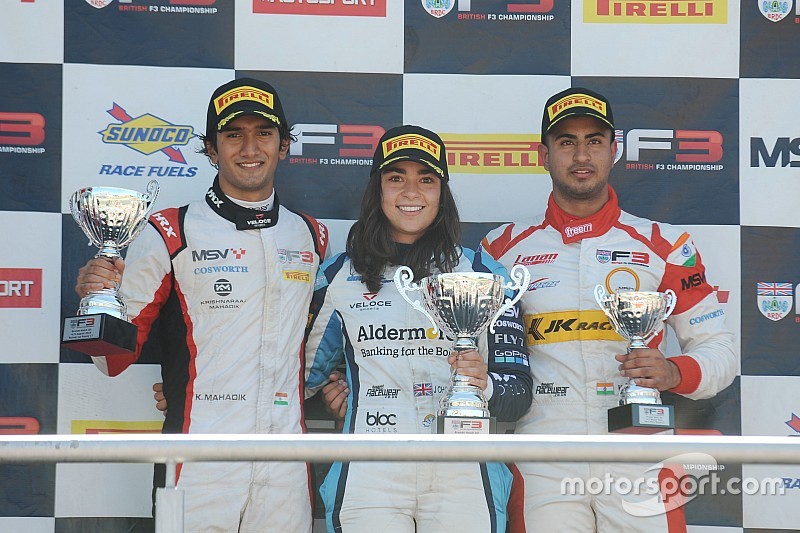 Indian racers Krishnaraaj Mahadik and Kush Maini stood up on a British F3 podium together for the first time in the Brands Hatch round of the championship on Sunday.

Mahadik and Maini finished sixth and seventh respectively in the first race of the weekend, which put them ninth and 10th on the grid respectively for Race 2.

Both got off the line well and then made further progress in the opening laps, with Maini jumping up to fifth and Mahadik following him in sixth.

A mid-race safety car, deployed after Ben Hurst retired, came as an added boosted, gifting the two drivers a chance to rise further up the order.

Mahadik took full advantage of the restart, overtaking both Maini and Sasakorn Chaimongkol to move up to fourth position.

Thereafter, Arvin Esmaeili dropped down the order due to unknown reasons while race leader Pavan Ravishankar slipped to 10th because of a jump-start penalty, promoting Mahadik up to the runner-up spot.

Maini, after the initial SC restart hiccup, passed Chaimongkol on track and then benefited from Esmaeili and Ravishankar’s aforementioned troubles to claim the final spot on the podium.

Later in Race 3, Maini and Mahadik finished sixth and eighth respectively to grab another decent haul of points.