Macleod recovers to win at Snetterton

The final Formula Three race of the weekend at Snetterton proved far more exciting than the first of the three races with victory eventually going the way of Sam Macleod (Fortec Motorsport). Second place went to Andy Chang (Double R Racing) and Matt Rao (Fortec Motorsport) was 3rd after a recovery drive that saw him come back from a very long way behind. The top three could have been very different however…

Starting from the back as a penalty for a yellow flag infringement in Race 2, Martin Cao (Fortec Motorsport) looked set to provide some entertainment as he would undoubtedly be on the move as soon as possible. What happened in fact was even more unexpected as pole man Macleod made an awful start and was passed by both Camren Kaminsky (Double R Racing) and Rao who claimed the lead on the run into Riches for the first time. Cao, meanwhile, had blasted past Li Zhi Cong (Carlin) and Chang for 4th and then passed both Macleod and Kaminsky to get on Rao’s rear wing.

It didn’t take long for the gap between 1st and 2nd to begin to shrink dramatically. Meanwhile, Macleod had regained his equilibrium and was now on the move as well. He despatched Kaminsky with great efficiency and began to close in on the Cao/Rao battle. Kaminsky, apparently dispirited by losing another place, promptly lost another to Chang and fell back into Li’s clutches. That left Chang to a quiet run for a while as Macleod disappeared in pursuit of the other two red Fortec cars. 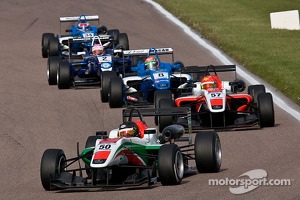 Sam MacLeod leads from the restart

For several laps Macleod chased down his team-mates, setting a series of fastest laps, until the three of them were nose to tail, while at the back Li was setting about Kaminsky. Cao made an abortive attempt to pass Rao on the run into the Bombhole, but had to back off. A lap later and the sound of tyres squealing in protest alerted the observant among the spectators to the fact that something had gone wrong.

Indeed it had. On lap 8 Cao and Rao tangled at Montreal, putting them both off the track. As the dust settled Macleod came through in the lead, while the marshals tried to untangle the Fortec pair. Chang had inherited 2nd, with Kaminsky and Li 3rd and 4th. Rao eventually got going again and finally reappeared in 5th, a good half lap adrift. However, he was about to get lucky. With Cao stuck in a dangerous position at the hairpin the officials had to scramble the Safety Car. That bunched the remaining cars up again, and meant the remainder of the race after the restart would be around 4 laps in length, a sprint to the finish.

At the restart Macleod controlled it well and then almost immediately started to pull away from the rest of the pack. Chang couldn’t live with him, and anyway he was soon busy trying to hold onto 2nd. Rao had found his way past Li and then Kaminsky, and was now very interested in relieving Chang of a place. His first attempt actually cost him time rather than gaining him a position, and then he simply ran out of race. Macleod was the winner by over six seconds, from Chang and Rao, while the last two places went to Kaminsky and Li. The next races, at Spa, should produce a far better turn out with several of the German F3 runners coming along to join in. Meanwhile, some – if not all – of the field can be expected to take part in the 2014 Zandvoort Masters meeting in two week’s time.

The fastest lap was set by Macleod, who is now in 2nd place in the Championship chase, just 7 points behind Cao, despite missing the last meeting because of clashing commitments in German F3.