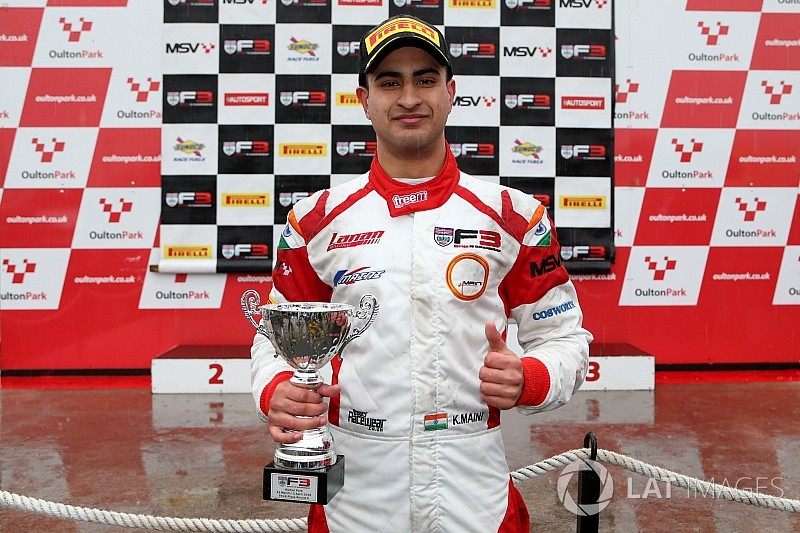 Kush Maini says winning the 2018 British F3 championship remains his solitary ambition after scoring a podium in the opening round of the season at Oulton Park.

Maini managed to turn around a difficult weekend, compromised by problems in practice and an error of his own in qualifying, to finish third in a wet race three.

While the 18-year-old admitted that his debut outing in the championship was “tough” and not made easy by lack of wet running, he sees no reason why he can’t be fighting for the title.

"It was a really tough weekend," he told the official British F3 website. "We had some issues on Thursday and Friday which weren’t really our fault, it was just one of those things which happens.

“We sorted it out for qualifying but I made a driver error and went off and cracked the front wing on the second lap, so I guess we just have to learn from these things and we’ve done a good salvage job for the championship.

"We’ve been really lucky with pre-season testing and we really only drove in the dry, so I haven’t really had a lot of experience in the wet.

“It was definitely tough and got really hard towards the end of race three with a lot of water building up on the track, but I’m happy that we got on the podium.

“There’s still a long, long way to go and we’re not so far behind, so a couple of strong weekends and we’ll be back in for the fight. That’s still our one and only goal."

Maini sits fourth in the standings after the opening round, 38 points off championship leader Nicolai Kjaergaard.

Having had prior testing experience at Rockingham, venue for the next round of the season later this month, Maini sees an opportunity to close the gap at the top of the championship.

"We’ve done a day of testing at Rockingham and we were really fast, so I’m looking forward to it,” he said.

“It’s a physical track and fitness is going to be the key there to keep it going through the race, so it’s going to be fun and I can’t wait for it."