Matt Rao was a slightly surprised winner in what turned out to be a “crazy race”.

At Snetterton this morning Matt Rao (Fortec Motorsport) was a slightly surprised winner in what turned out to be a “crazy race” according to the youngster. Second was his team-mate Sam Macleod, with Andy Chang (Double R Racing) in 3rd place. There were no other finishers as half the field either self-destructed or were helped into retirement by other people!

At the start Li Zhi Cong (Carlin) held onto the lead from pole for around a second before Camren Kaminsky (Double R Racing) came blasting past around the outside at Riches to claim the lead. Macleod, starting from 5th, stayed there to most people’s surprise, but the others seemed to be too busy tripping over each other to make for easy targets. Shortly afterwards, Rao also passed Li to move into 2nd while Kaminsky took advantages of the squabble breaking out behind him to try and make a break for it.

Meanwhile, Martin Cao (Fortec Motorsport) had also edged past Li for 3rd. To add to Li’s woes he was also being warned for not respecting track limits, something that seemed to be contagious. Macleod was still 5th and Chang was last in 6th place. Cao was pushing hard for his customary 2nd place though, which saw him run wide at Riches and end up losing ground instead. 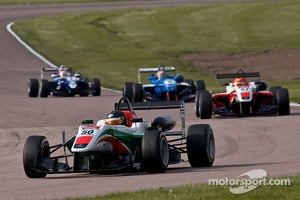 That enabled Macleod to nip past Li for 4th while Kaminsky continued to hold off Rao despite Rao setting a new fastest lap as he pursued the American relentlessly. At the back Chang was now being shown black and white flag in response to his apparent disregard for track limits. He was not the only one; Macleod was issued a warning at the same time for the same offence. And then Li went off at Riches and the yellow flags were hauled out while a snatch vehicle could be scrambled.

As the field came round again Rao closed right up on Kaminsky, but then realised that double yellows at Riches meant he would have to abandon the move he was considering. The result was that Cao and Macleod were able to sneak through for 2nd and 3rd, though Cao (and Rao) were both reported for yellow flag infringements immediately afterwards, Cao being demoted to the back of the grid for race 3 as a result.

However, his immediate worry was not the Clerk of the Course, but Macleod who seemed determined that 2nd should be his, if he could just manage to make that move round the outside work. He was pushing very hard now, setting a new fastest lap of the race as he attempted to deal with the Chinese ahead of him. 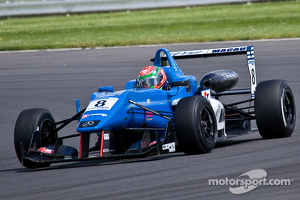 All of this meant Kaminsky was now a good 1.2 seconds clear of the battling pair and was presumably hopeful that they would continue to distract each other while he got away. He was not that lucky. A lap later the gap had reduced to 0.7 seconds with Cao in hot pursuit. A new fastest lap of the race showed how hard he was trying, though he followed it up by spinning at the Montreal hairpin. That was his race done.

Macleod was promoted to 2nd with Rao 3rd and Chang 4th. Macleod saw his chance then and went for a gap at Riches, having set the latest fastest lap (a neat 1:43.143) just before. Somewhere in the move he realised he wasn’t going to make it and backed off, settling down to wait for a better opportunity. The gap was shrinking rapidly now, and it looked like it would be a matter of when not if Macleod got through.

However, Macleod seemed to be struggling somewhat with what looked like handling issues. It didn’t stop him going for it again though. With two laps left of the race, he made to go up the inside at Riches and didn’t quite get it right. Kaminsky spun, Macleod went off and Rao went through into the lead. By the time Macleod got back on track, the Englishman was a long way down the road towards the finish line. Kaminsky, on the other hand, was out of the race. There were now just three cars left, but to be fair they had provided some entertainment this time out.

Rao came home a delighted winner, from Macleod and Chang. Afterwards, Chang, Kaminsky, Cao and Li were all summoned to see the race director but only Cao would end up with a penalty and will start the last race of the weekend from the back of the grid. The fastest lap of the race was set by Macleod, on the final lap, when – he claimed – he managed to get some clear track.

Macleod recovers to win at Snetterton