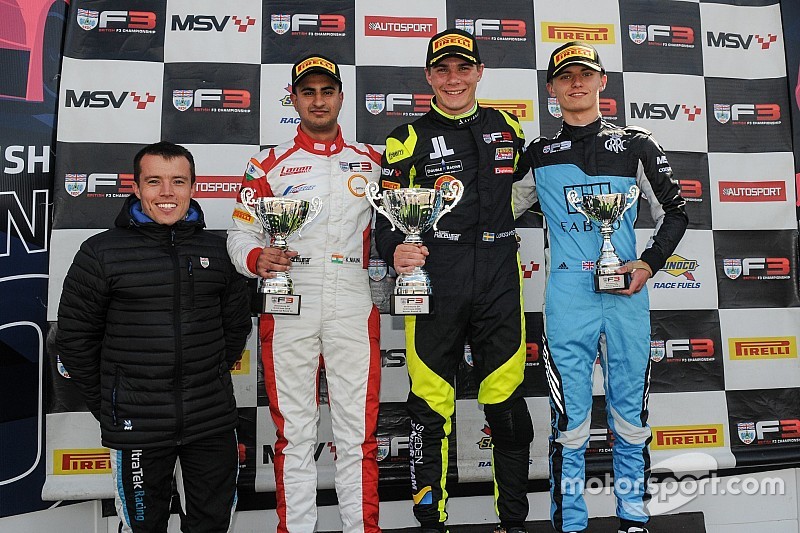 Kush Maini came within 0.392s of scoring his second ever British F3 win at the Silverstone Formula 1 circuit on Saturday.

Maini started the opening race of the Silverstone weekend from the front row of the grid and tucked in 0.7s behind polesitter Linus Lundqvist at the end of the first lap.

From there on, he reduced the gap to Lundqvist with every passing lap, bringing the deficit down to just a tenth of a second on lap 8.

He got into the slipstream of Lundqvist at the Wellington straight and ran side-by-side at the Luffield corner, but the Double R Racing driver managed to hold him off at the succeeding start/finish line.

The pair also came close at Copse on the penultimate tour, but Maini was unable to find a way past and had to settle for second.

"A massive thanks to Lanan Racing, they gave me such a good car today and definitely a car I could have won with. We finished second, which is not what we wanted," he said.

"I definitely felt like I was quicker but through Maggots and Becketts it was really hard to follow so I had to give him a gap so I could attack into the last sector, but he had me covered."

It was his sixth podium finish of the season and allowed him to close the gap to second-placed Nicolai Kjaergaard to just 27 points in the standings.

Although he didn’t manage the race win, he did set a new British F3 lap record at the Silverstone circuit - which could potentially hand him pole for the weekend’s final race.