Beechdean's young rookies on the verge of British GT4 title 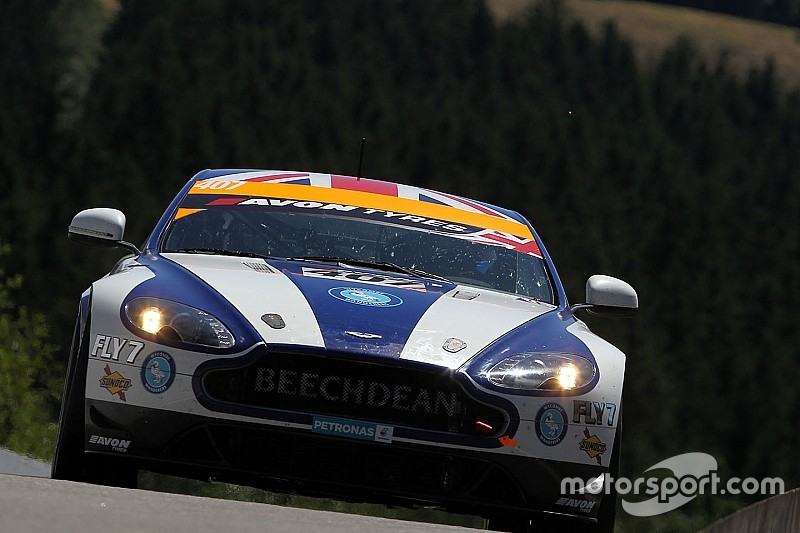 Teenage duo Jamie Chadwick and Ross Gunn are close to making British GT history by being the youngest title holders in the series' history. Valentin Khorounzhiy spoke to the pair.

As it stands, Beechdean AMR will need to pull off a fantastic end to the British GT season to claim the GT3 crown as they trail runaway leaders Ecurie Ecosse. However, even if they miss out in the main class, the squad should be able to fall back on their GT4 duo for a 2015 title.

Ross Gunn, 18, and Jamie Chadwick, 17, have not done GT racing before this season. Yet, Beechdean picked them as successors to 2014 GT4 champions Jake Giddings and Ross Wylie, and the new team-up have proven very much up to the task.

As it stands, Gunn and Chadwick are 42.5 points in the clear with three races to go, having featured on the class podium in five of six races, with only an Oulton Park exclusion robbing them of a perfect record.

A year on the sidelines

Midway through 2013, Ross Gunn was climbing up the ranks in BRDC Formula 4, having recorded a career-first win in cars as he slowly but surely made up ground on the championship frontrunners. Then he claimed his second victory at Silverstone and, when he left the track, his season was over.

“We won races in my rookie season, with a rookie team and no testing – I was very happy with that,” Gunn remembered. “But I was massively struggling for budget so we started to pack up and focus on 2014.”

For Gunn, however, 2014 was over before it really begun. A sophomore season in BRDC F4 was all but a certainty, with a title campaign almost definitely on the cards, only for a sponsor to back out, leaving Gunn on the sidelines.

“It was a nightmare,” he said. “A lot of sleepless nights. I'm a racer and I want to race so when I wasn't given the opportunity, it was a massive shame – for me and for my family.”

However, he kept at it and caught a break when he was signed by Beechdean owner and 2013 GT3 champion Andrew Howard. “My dad got Andrew into racing ten years ago so Andrew wanted to give something back to us,” Gunn said. “He wanted to give me a chance and here we are.”

Jamie Chadwick made her debut in BTCC support series Ginetta Junior at the age of 14. Over the next two seasons, she'd make the podium on seven occasions and earned a GT4 test, which was soon followed by a full-time deal.

“I think the conventional route is to come out of Ginetta Juniors or karting and go to single-seaters, at least for a few years,” she said. “But looking at where careers are being made, especially with a brand as iconic as Aston Martin, I think this is definitely the right way to go.

At 17, she's among the youngest in the British GT paddock, yet there's little to suggest the pressure has gotten to her. “I have been on the TOCA package where it's been pretty crazy, so you get used to that side of it.”

“Inevitably, when you're out there, you've got the big GT3s storming past you, it's a bit surreal,” she admitted. “But for me it's just been a learning curve, keeping my head in the game and learning every time I go.”

Neither Gunn, nor Chadwick had to share their cars with other drivers before this year. But that does not seem to have been a challenge - they have not only won the GT4 class at Rockingham and Silverstone, but also triumphed in the Britcar 24 hours as part of a five-driver team.

“Me and Ross, I think we work well as a team,” Chadwick said. “Our different backgrounds and pedigrees, I think, are really interesting.

"We seem to utilise each other's strengths and weaknesses to push each other harder. It's been great.”

Gunn himself has also been very happy with the team-up. “Jamie has been good to work with, very easy to get along with,” he said. “In a race stint, she's very good, she's very consistent, always towards the front in her group of cars.”

The combined effect of the weight penalty their Aston Martin has to carry and the heat meant that the most recent round at Brands Hatch was not the duo's strongest showing.

And yet, having aimed for fifth, they managed to salvage a podium, staying out of trouble while many other GT4 contenders around them did not.

With three races to go, the duo should have enough of a gap to secure the title – provided they keep bringing the car home. “We've got some good wins, some big wins in the beginning of the year and that jumped us to the top,” said Chadwick. “Now, as championship leaders, the priority has to be to finish and get points.”

Yet, however they fare during the final races, Gunn and Chadwick have already made a brilliant first impression in GT racing – and both of them should have a great future ahead.

Griffin and Butcher ease to victory in first Snetterton race