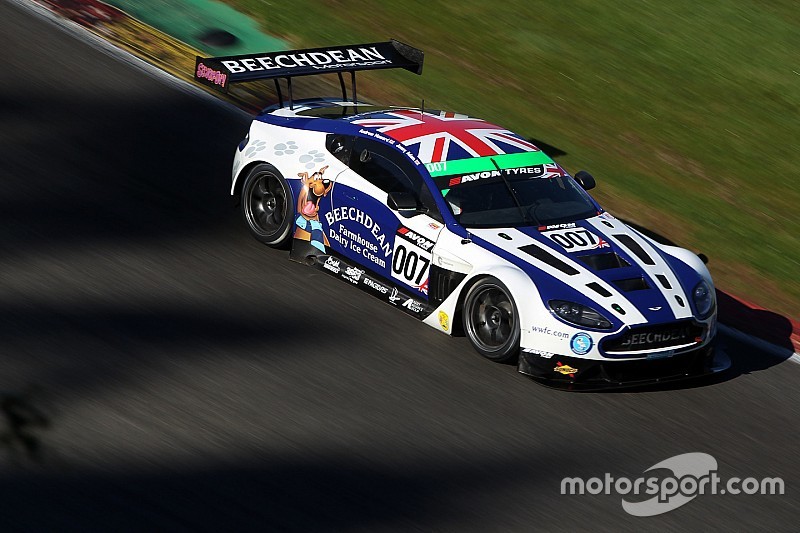 Beechdean Aston Martin drivers Andrew Howard and Jonny Adam became the first repeat winners of the season with an unflustered victory at Spa.

Starting from pole position, Howard led the early stages after Liam Griffin was awarded a drive-through penalty for jumping the start in his Motorbase-run Aston – but was caught and passed by the Aston of Stuart Leonard before handing over to Adam at the end of his stint.

The driver changeovers co-incided with a lengthy safety car period, after which Michael Meadows, taking over from Leonard, led the way from Adam, who soon found a way into the lead after the restart at La Source.

From there, Adam was untroubled at the head of the field, duly clinching he and Howard’s second win of 2015 following on from their Oulton Park success in April.

“The car was great, nice and consistent; it was more a case of watching the track limits because it’s so easy to make a mistake here,” said Adam.

“As for the championship, it’s been going backwards and forwards as the season’s gone on but Brands is a good circuit for us, we won at Snetterton last year and it always goes down to Donington, so we’ve got a couple of good rounds coming up.”

Meadows would later concede a further place to the Barwell-run BMW Z4 of Phil Keen, who secured a first podium of the season for himself and teammate Jon Minshaw, with Meadows and Leonard taking third in their first outing of the season.

After Griffin’s jump start, the ex-BTCC racer’s teammate Rory Butcher was able to recover to fourth place late on, but was demoted to fifth behind series leaders Marco Attard and Alexander Sims (Ecurie Ecosse BMW) for overtaking Sims before the Safety Car line at the restart.

In the GT4 class, Oz Yusuf and Gavan Kershaw converted pole position into a relatively straightforward win behind the wheel of their ISSY Racing Lotus Evora, beating the Beechdean Aston Martin Vantage of Ross Gunn and Jamie Chadwick by 10 seconds.