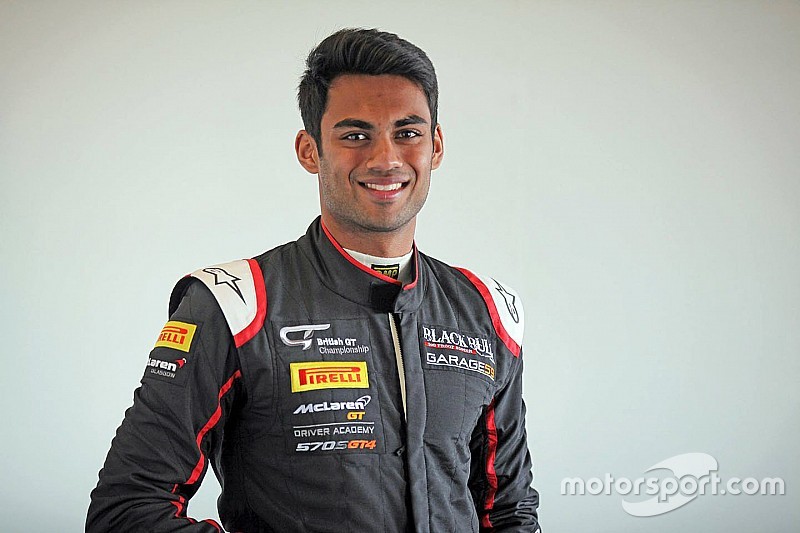 Single-seater convert Akhil Rabindra has cited lower competing cost and increasing opportunities in GT racing as the two central reasons behind his move to the British GT series.

After racing formula cars for several years in India and the UK, most recently in British F3 and Euro JK, Rabindra will switch to sportscar racing in 2017 as a newly-announced member of McLaren GT’s driver academy.

The 20-year-old will compete in the British GT for renowned McLaren customer outfit Garage 59, racing a 570S GT4.

Ahead of the start of the season, Rabindra says cost remains a major deterrent in pursuing a career in single-seater racing.

“There were many reasons associated to the shift to GT racing and cost was also one of the reasons,” Rabindra told Motorsport.com.

“One of the other reasons was that there was a greater potential to make it to being a professional racing driver as the opportunities around the world are plentiful.”

“There are different possibilities available in different parts of the world and different championships. We have to wait and see what comes our way.”

Considering it will be his first season in GT Racing, Rabindra sees 2017 as a year to get used to new machinery rather than chasing top-notch results.

“I see this year as a learning year to get used to the car and format,” he said.

“This is my first year in GT racing with a lot of variables such a another driver, pits stops and longer races.

“The car is a lot lot different to a single-seater in terms of weight, power and aero,” he continued. “The GT car has driver aids such as ABS and traction control which help the driver. The weight of the car has a different braking style to adapt too.”

While McLaren has a strong track record with the 650S GT3, which won last year’s Blancpain Endurance title with the same Garage 59 outfit, the 570S GT4 is still an unproven machine.

After a development year in 2016, the 570S GT4 will be available in its final trim for the first time this year.

However, Rabindra has no concerns about the pace of McLaren’s latest GT racecar: “The 570S has won a few races and been on the podium last year in British GT.

“The car has been through an intensive developing year last year where they have made the car reliable and fast. The car is well balanced and has great potential to do well this year.

“There is the Balance of performances (BOP) in British GT where they try to even out the cars for each round.  We have to wait and see how the BOP affects us this year.”

A move to GT Racing makes financial sense in today’s world of racing, where pay drivers have made it harder than ever to forge a career in single-seaters.

At the same time, the popularity of sportscar racing has been on a rise recently, with the burgeoning World Endurance Championship (WEC) being the best example.

Moreover, the Asia-Pacific region has attracted interest from several series and manufacturers, with Blancpain/SRO Motorsport launching an Asian version of their series this year.