A pivotal point in the BTCC season, Knockhill is set to host one of the largest sporting events in the country over the bank holiday weekend. A huge partisan crowd is expected at the tight and twisty circuit, with many more traveling from far and wide to see the biggest motor racing championship in the UK first hand.

A frenetic event at Snetterton last time out saw a number of the championship contenders clash in Norfolk and now the vast grid of nearly 30 cars is set to take on one of the shortest circuit’s on the calendar, where bumping and grinding is almost guaranteed. 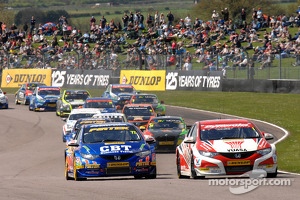 Gordon Shedden and Andrew Jordan head to turn 1 at Thruxton

There are arguably six drivers who could currently regard themselves as 2013 championship contenders, but such is the ever-changing landscape of the BTCC that this figure could rise or fall during the Knockhill triple-header.

Matt Neal leads the way as it stands after an incredibly consistent start to the season. His run of 14-race finishes inside the top six came to end at Snetterton, however, and two fellow Honda Civic drivers are now hunting him down.

Pirtek Racing’s Andrew Jordan has been nicely poised in second place for much of the season and another victory at Snetterton further boosted his chances of winning a first BTCC title come the end of the campaign.

Neal’s Honda Yuasa Racing team-mate Shedden is the driver who has made the biggest move in recent rounds. Trailing down the order after a difficult season opener at Brands Hatch, the Fife-based Scotsman has edged his way back into contention with three race wins and a total of 12 podiums – more than any other driver.

2009 BTCC champion Colin Turkington has been nothing short of a revelation on his return to the series this season. The Ulsterman has taken his brand new eBay Motors BMW to three race wins, and could have been even higher in the championship but for contact with Jordan and Shedden in two races at Snetterton, which pushed him down the order from race winning positions. 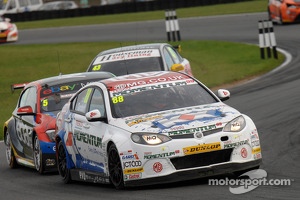 Despite an incredible maiden victory for young gun Sam Tordoff last time out, the big losers at Snetterton were MG KX Momentum Racing. After stellar work from the squad to develop its cars the MG6 was the fastest machine in Norfolk, but ultimately failed to take the results its pace deserved. Double champion Jason Plato had a particularly tough time after he followed home Tordoff to take second in race one. From there the BTCC legend suffered mechanical failure in race two and a spectacular accident in the final showdown – where his car was fired into a dramatic barrel roll after heavy contact with the barrier. Plato thankfully emerged unscathed from the incident but he knows that the trip to Scotland could make or break his championship chances.

ITV presenter Paul O’Neill is back in the BTCC after Team HARD confirmed the two-time race winner will drive one of its Vauxhall Insignia’s at Knockhill.

The deal, which is currently for the Scottish round only, is set to delight the tens of thousands of spectators making the trip to the circuit and the many more watching on TV, as O’Neill has long been a fans’ favourite in the BTCC.

The two-time race winner has sat out this campaign so far – working as an ITV pundit as part of the BTCC coverage – but the 33-year-old is pleased to be back on the grid. 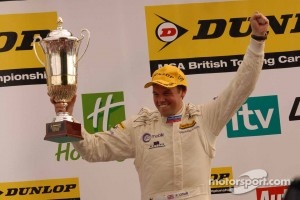 “I am delighted to be back in a Touring Car and to be invited to do so is even more flattering,” he said. “My ITV commitments come first this season but they’ve been really supportive about this opportunity. We all feel it should provide an insightful spectacle for the TV viewers too.

“I don’t want to put too much pressure on myself but I’d like to think I could be knocking on the door of the top ten. Obviously if I could do that in race two then I’d stand a chance of being up front for the final race, which would be absolutely fantastic.”

Team HARD boss Tony Gilham has given a number of drivers their first opportunity to race in the BTCC over the last few seasons, but he’s equally delighted to hand a drive to one of the series’ more experienced and well-known racers. “Hopefully it’s the start of a longer relationship,” he said. “Now that our line-up is complete we’re all really looking forward to the trip to Knockhill.”

Gordon Shedden has followed the BTCC for most of his life – long before becoming one of the stars of its grid. Based just a few miles from the circuit, Shedden watched as a teenage fan when fellow countryman John Cleland drove to his second BTCC title back in 1995. Now 18 years on, Honda racer Shedden returns as the county’s first champion since…

“It’s going to be a great event and I can’t wait,” says Shedden. “I love racing in front of my own fans and it’s nice to give them a Scottish champion to support.

“We didn’t expect the results we achieved at Snetterton as the MGs were just too fast, so it was nice to come away with a win. That’s touring car racing – you just never know what to expect and I am sure the fans are in for an another exciting spectacle this weekend.” 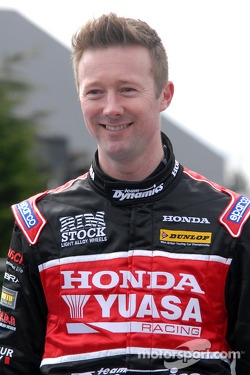 Shedden has won three times at Knockhill previously, but it was arguably his two podiums there during his championship winning campaign last season that proved the most vital in his BTCC career.

The 34-year-old is not the only Scot on the grid for next weekend, however, as he’s joined by debutant Kieran Gallagher and Inverness-based Dave Newsham – the former being handed his maiden run in another Team HARD Vauxhall Insignia.

Gallagher only gained his racing licence a little over a year ago but took a podium in the last round at Knockhill last month. Even he didn’t expect such career progression so soon, “I’m improving all the time but of course this is just amazing,” he said. “I’ve watched Jason Plato racing on TV for years and Gordon Shedden gave me one of my trophies last season, so for sure it’ll be a little surreal to be in the same race as guys like that, but I cannot wait and I hope to make the most of the opportunity.”

Newsham won at Knockhill last season and the Speedworks Motorsport driver will be hoping for a similar outcome this weekend as his 2013 season has so far proved challenging.

Three BTCC races will take place on Sunday, with the entire race day being broadcast live and in high definition on ITV4 from 11:00.

The soft tyre story so far in BTCC…

Tordoff withdraws from Knockhill BTCC round