Four-time British Touring Car champion Colin Turkington bounced back from two tough events to claim pole position for BMW at the Knockhill round.

The Northern Irishman got a nice tow at the back of a train comprising the sister West Surrey Racing-run BMW 330i M Sports of Tom Oliphant and Stephen Jelley, and grabbed the top spot by 0.117 seconds.

Turkington is carrying only 15kg of success ballast at the Scottish track this weekend, after two dismal rounds at Brands Hatch and Oulton Park plummeted him to ninth in the championship.

But pole has put him in a prime position to bounce back at a circuit that has always played to the strengths of the rear-wheel-drive BMW.

“It’s really good to be back at the front of the grid,” said Turkington. “Knockhill is always a circuit I look forward to. I thought it could be a good track for us, but you never know because everybody else is so fast this season.”

Regarding the tow, he said: “I think it was more pot luck than anything - this wasn’t a circuit where we planned to get a slipstream, but I probably got a little benefit from running behind Stephen.

“The gap was very small and there’s a lot of fast cars behind me, but I’m confident with the car.” 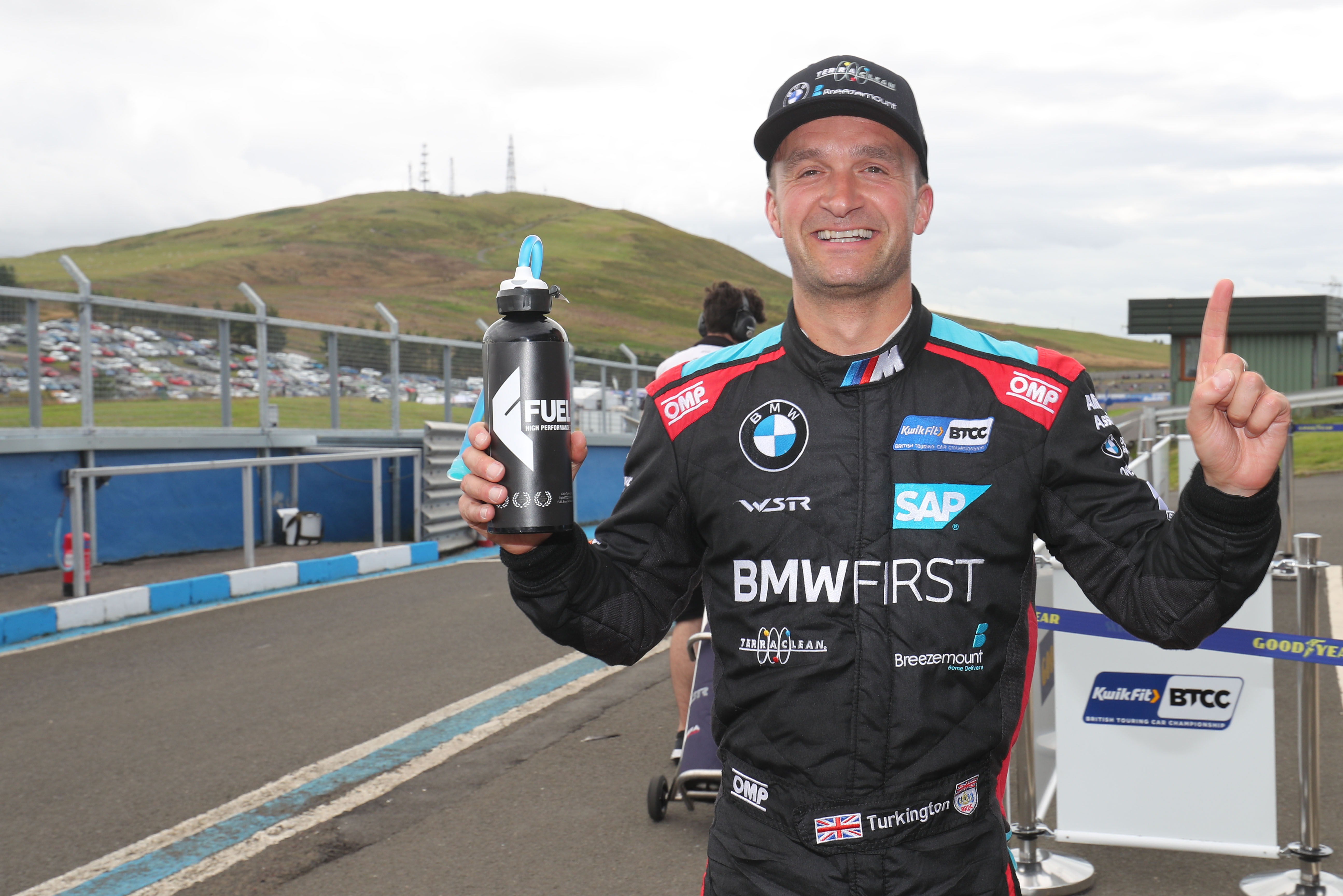 Turkington’s effort displaced the unballasted BTC Racing Honda Civic Type R of Senna Proctor, who briefly sat at the top of the times in his bid to make it back to back poles following on from Oulton.

Proctor said he struggled to get his tyres into the window, as he initially did at Oulton, but his time - like Turkington, possibly aided by a tow (from Tom Ingram) - was nevertheless enough to hold off a last-lap charge from free practice pacesetter Chris Smiley.

Smiley, also with no ballast aboard his Excelr8 Motorsport Hyundai i30 N, bemoaned traffic issues, but managed to pull a time out of the bag as the chequered flag fluttered to take third.

That demoted Proctor’s BTC Honda team-mate Josh Cook, in a return to form with a decreased 27kg of ballast on his car. He was second on the opening runs, but failed to improve later in the session and briefly had two wheels in the gravel at the chicane.

Fifth was an excellent performance from Jake Hill, carrying 48kg of success weight on a front-wheel-drive car - the Motorbase-run MB Motorsport Ford Focus - around such an acrobatic circuit.

Sixth was the Laser Tools Racing Infiniti Q50 of championship leader Ash Sutton - the Japanese rear-driven machine is on the full 75kg of ballast, and was in the top three at the halfway point, but the two-time champion could not improve.

Sutton went fully through the gravel at the chicane late in the session, but was already down on his best lap after the first sector.

Sutton headed his unballasted team-mate Aiden Moffat by a mere 0.001s - Moffat led the Scottish contingent, but appeared to swerve towards Jade Edwards early in the session after being baulked by the BTC Honda through the chicane. 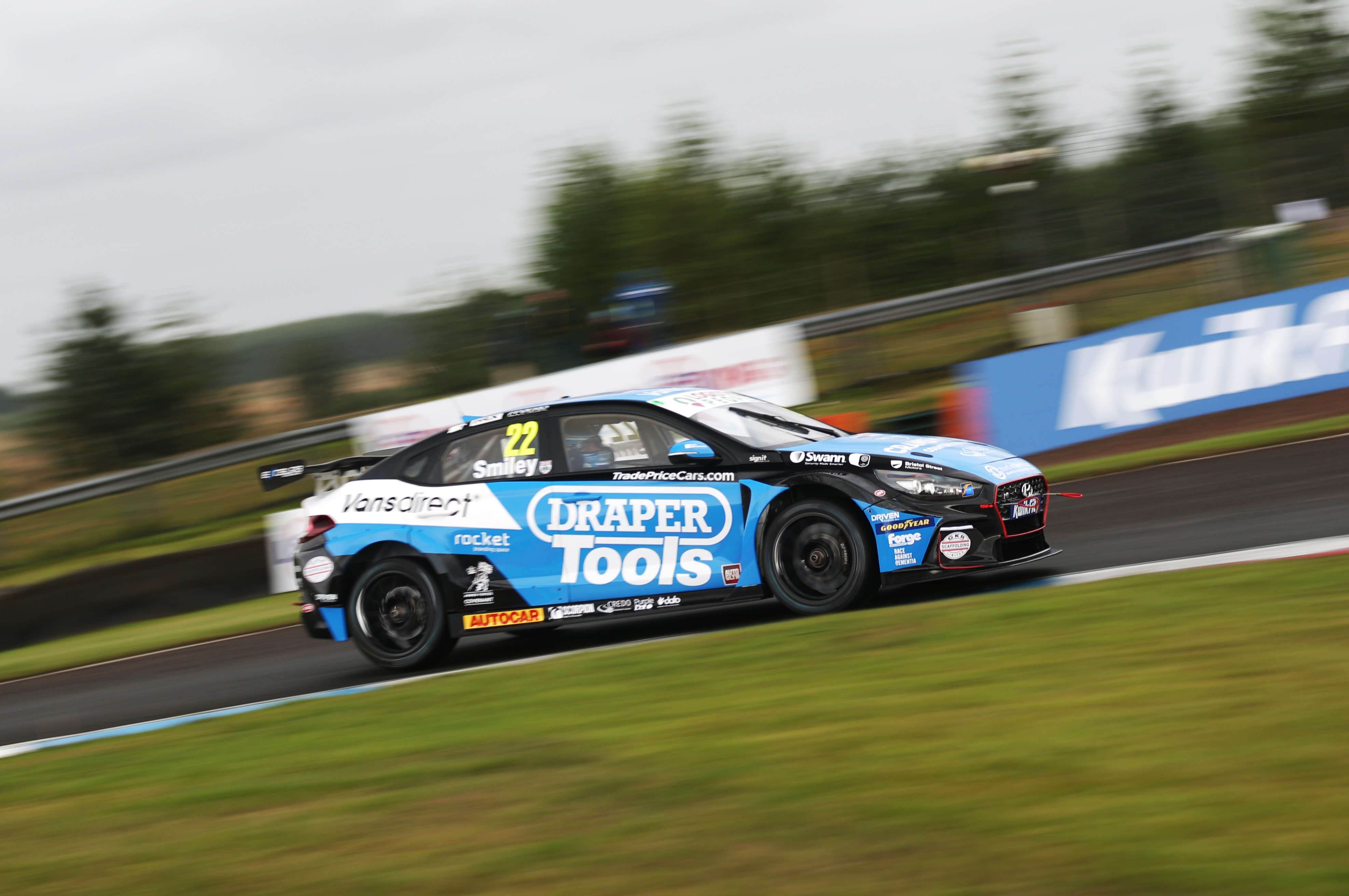 Smiley showed practice form was no fluke with third

Next of the Scots, eighth fastest, was Rory Butcher, with 21kg of weight on his Speedworks Motorsport-run Toyota Corolla.

Like team-mate Smiley, Ingram put in a last-lap improvement to vault his Excelr8 Hyundai - on 66kg of ballast - into the ballpark in ninth place, while Oliphant’s WSR BMW completed the top 10.

It was a tough session for the Team Dynamics Hondas: Gordon Shedden could do no better than 11th on his home track, while Oulton Park breakthrough winner Dan Rowbottom, third in the points, was down in 19th.

There were two red flags: the first came when Rick Parfitt dropped his Excelr8 Hyundai into the gravel at the chicane after seven minutes; the second when Adam Morgan’s Ciceley Motorsport BMW fired off at the same place after 18 minutes.

Morgan appeared to have a puncture, although whether this was cause or effect was unclear.