Turkington “in right place” despite midfield start at Brands Hatch

Four-time British Touring Car champion Colin Turkington has said that his 14th place in qualifying for the Brands Hatch Indy Circuit round is what he expected with success ballast.

Turkington lies third in the points, so is carrying 57kg on his West Surrey Racing-run BMW 330i M Sport.

While his best lap was good only for the seventh row of the grid, he completed six fliers all in the mid-48s bracket.

“It was probably what I expected,” said Turkington. “The car was the best it’s been all day and balance-wise I think we’re in the right place.

“I had a good car on the whole throughout the lap – I’d love to be higher up than P14, but that’s my pace with the success ballast. I don’t know how many times I saw the same lap time!

“We got the most out of it: it’s Brands Indy and you pay a bigger penalty for the success, but that said I’m still happy to have the points in the bag and the weight on the car. I think we can go forward tomorrow. Potentially my day will be in reverse, and we’ll look to do something in race three.”

Turkington’s team-mate Tom Oliphant, who is carrying no ballast after unfortunate incidents in the first two rounds, has qualified fourth, and set no fewer than five laps quicker than fifth-placed driver Aiden Moffat.

“I’ve been looking forward to this round because we did quite a lot of winter testing here, and the car felt good then,” Oliphant said. “I wasn’t looking forward to Thruxton and Snetterton [the first two rounds], because of the lack of testing and because they’re not my best tracks, so I was hoping to kickstart my season here.

“The two Hondas with hardly any weight in [Dan Rowbottom and Gordon Shedden] I was expecting to lock out the front row, but they weren’t that far ahead of me.

“We’ve got a lot of consistency in the car, and the front-wheel-drives have to run quite a different set-up in qualifying to the race.” 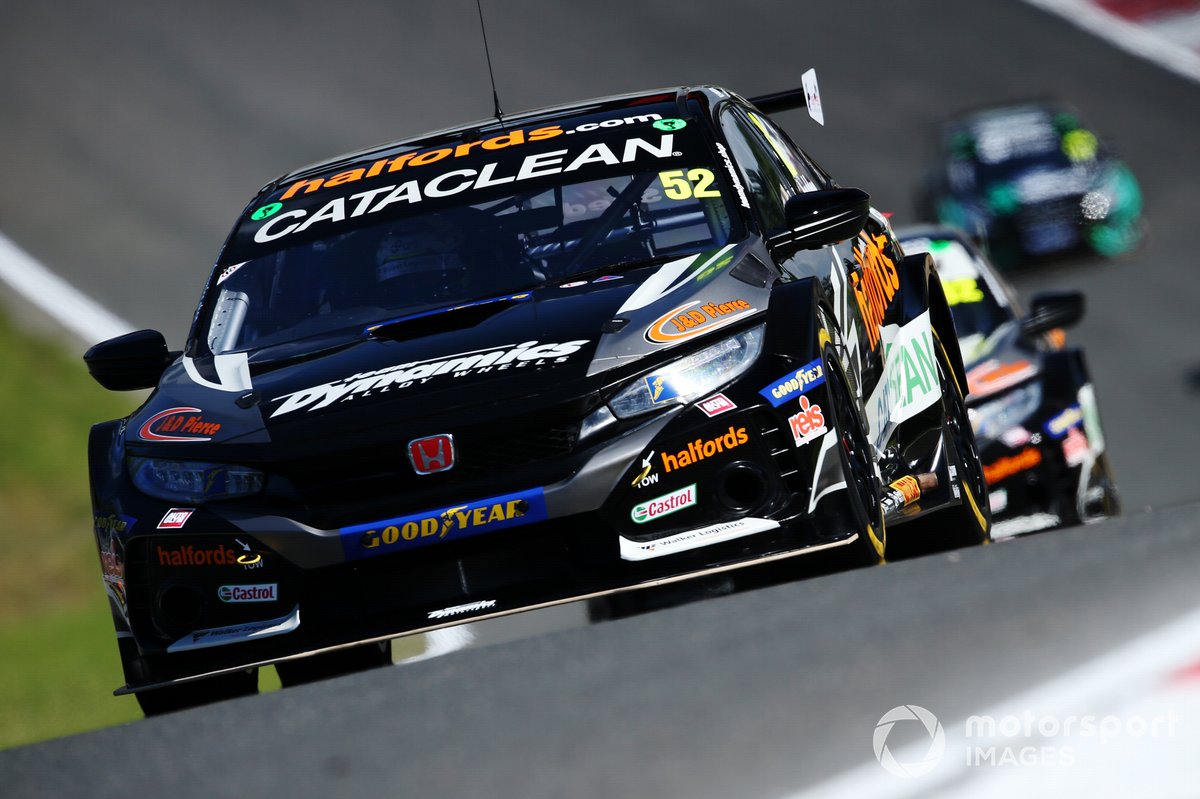 While Stephen Jelley qualified the remaining WSR BMW, carrying 27kg of success weight, in 10th place, it was a disaster for the Ciceley Motorsport BMW squad. Adam Morgan was quicker than all the WSR runners in free practice, but ended up 21st on the grid, with Tom Chilton 24th.

Morgan had a lap good for 10th on the grid deleted due to a track-limits offence, and also suffered a bizarre incident with Chilton.

Chilton had run wide into Clearways in order to get good exit speed to start a flying lap, and Morgan, who was on a hot lap, thought he was leaving the door open. The two cars collided, with Chilton spinning.

Apart from Turkington, the other driver in the top six in the championship to languish down the grid is Rory Butcher in the Speedworks Motorsport-run Toyota Corolla. Butcher, who is on 33kg of ballast, ended up 16th on the grid due to a power-steering problem.

“It just got gradually worse and I could hardly steer the car at the end,” said the Scot. “The balance felt fine – it’s just a shame we couldn’t exploit it.”