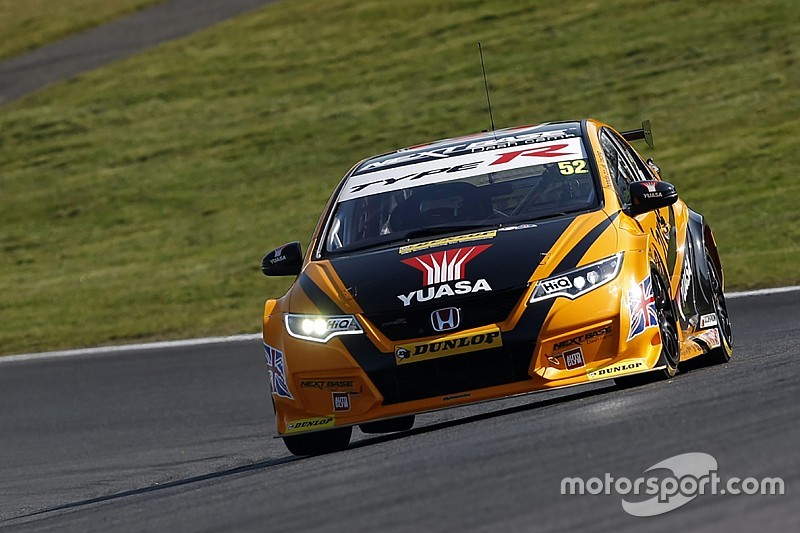 Gordon Shedden has clinched his third BTCC title in the final race of the season at Brands Hatch, with a third place finish enough for the Honda driver to beat long-time points leader Sam Tordoff to the crown.

With Shedden finishing third and Tordoff fifth, the Scotsman beat his chief rival by just two points, becoming the first driver to successfully defend the BTCC title since Fabrizio Giovanardi in 2008.

Tordoff, who had led the title chase since Knockhill, had been in position to take a maiden crown in the early stages, as the West Surrey Racing BMW driver ran third behind Mat Jackson and Aiden Moffat.

But he soon had the Honda of Shedden on his tail, with the defending champion moving ahead at Clearways at the end of the seventh lap - provisionally putting he and Tordoff level on points, but with Shedden ahead on countback.

Tordoff's hopes then faded completely when he dropped behind Adam Morgan at Druids on the 13th lap of 18, and although the Mercedes driver went on to put Shedden under serious pressure there was nothing he could do to make his way into third.

Colin Turkington, the only other man in with a chance of the title following Matt Neal's withdrawal, slumped from seventh to 12th as he struggled with maximum success ballast in his Subaru Levorg.

He fell to fourth in the final standings behind Jackson, who sealed his fifth win of the season.

Motorbase Ford driver Jackson, removed from theoretical title contention after finishing seventh in race two, started from pole courtesy of the reverse grid draw ahead of the Mercedes of Moffat.

Shedden lost a spot to Jason Plato’s Subaru at the start, but the Scotsman was able to get ahead at Druids and was up to fifth place, before passing Josh Cook’s Triple Eight MG on lap four at Druids.

The safety car was then called after Team BMR’s Warren Scott was knocked into the gravel at Druids in an incident with the Proton of Dan Welch and the Ford of Alex Martin.

When the race restarted, Shedden hounded Tordoff’s BMW over the first green flag lap, making his move at Clearways down the inside and drafting past the BMW driver on the straight.

Shedden then closed down on the leading pair of Jackson and Moffat, while Tordoff would fall back one further position behind the Mercedes of Morgan.

On lap 15, the safety car was brought out again as Welch buried his Proton at Sheene, with the race restarted with just one lap to go.

Shedden came under threat from the soft tyre-shod Morgan, but the Honda driver held on to the final podium spot behind a victorious Jackson and Moffat.

While Tordoff missed out on the main prize, West Surrey Racing wrapped up the manufacturers' and teams' championships.

Andrew Jordan meanwhile won the independents' championship for a third time ahead of Motorbase teammate Jackson.