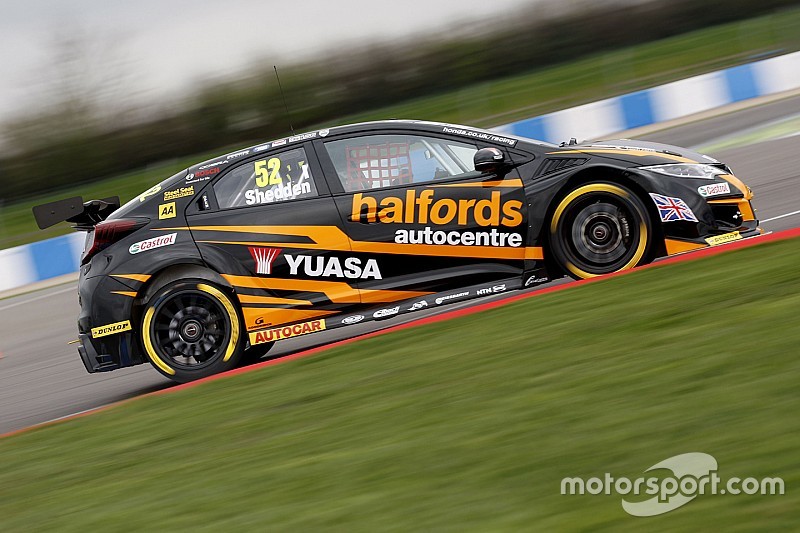 There was a drawn out start to the race when pole-sitter Tom Ingram’s Toyota failed to get away from the start line for the warm-up lap, but Ingram performed a quick electrical reset and got going in time to climb back through the pack for pole.

His car would fail again, though, and he prompted an aborted start. After another warm-up lap, Ingram retook pole position but would have to take a drive-through later in the race for causing the start delay.

However, a heavy start line crash for Jason Plato (Team BMR Subaru) meant the race was red flagged. Plato was uninjured, but his car was badly damaged, and as the grid was reissued by officials, Ingram’s penalty was erased.

The Team Dynamics Honda driver Shedden snatched the advantage from the fully ballasted Toyota of Ingram at the end of lap two and raced clear, despite a mid-race safety car.

"The car was even better than it had been in the first race, when we had no weight on, which was bizarre,” said Shedden. “I am delighted though. I could see I was being caught at the end, but we had enough in hand to land the win.”

Ingram was struggling with the weight and ceded second place to the flying WSR BMW of Rob Collard with four laps to go.

Andrew Jordan, running the soft tyres on his WSR BMW, was on course for fourth until there was contact between him and the Handy Motorsport Toyota of Rob Austin. Austin powered ahead for fourth, and Adam Morgan (Ciceley Motosport Mercedes) followed him through.

Jordan fended off the Motorbase Performance Ford of Mat Jackson on the run to the line and then inherited fifth place when Austin was excluded post-race.

Josh Cook (Maximum Motorsport Ford) moved up to seventh, with Tom Chilton getting reverse-grid pole for Vauxhall in eighth.

Historic Atlantic to race at Trois-Rivieres