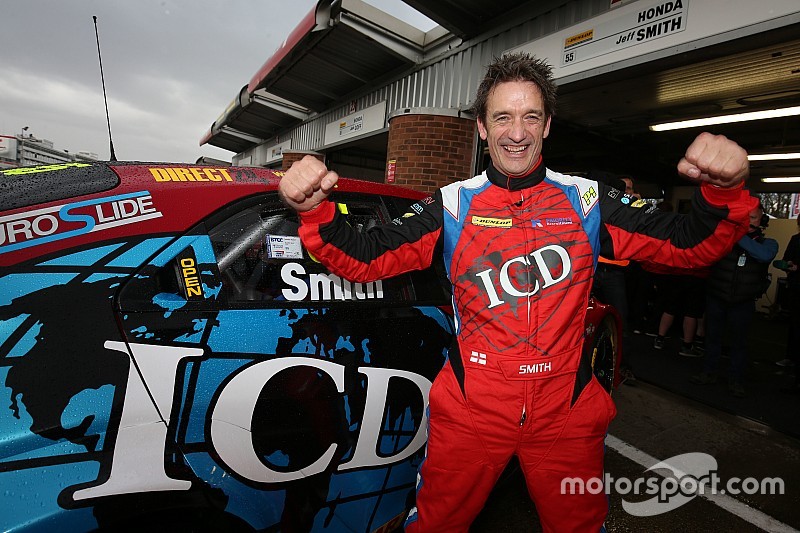 Jeff Smith has taken his first career BTCC pole position at Brands Hatch after a topsy-turvy qualifying session, which was interrupted by rain and red flags.

The qualifying period was affected by two red flags and a mid-session rain shower, which mixed up the order and ruined many drivers’ programmes.

Colin Turkington was on top from his WSR BMW teammate Andrew Jordan when the first red flag flew, as Dave Newsham dropped his BTC Norlin Racing Chevrolet Cruze at the top of Paddock Hill Bend.

When the running resumed, Tom Ingram put his Speedworks Toyota Avensis on pole before Eurotech Racing’s Smith planted his Honda Civic Type R at the top.

That was just before the red flags flew as Ash Sutton had gone off at Paddock Hill Bend in his Team BMR Subaru. There was a lengthy break as the car was recovered.

However, a late downpour caused several cars to skate off later on in the session, and no others improved dramatically and Smith secured top slot.

“That was amazing,” said Smith. “It was a mega lap at the right time – I found some space, and I got a tow from Matt Neal. It was mega.

“I always think that I have a performance like this in me – that is why I am here – so I will always keep pushing, but it is physically executing it that means everything and I have managed that.

“I wasn’t counting my chickens when the others stopped running, but this is thrilling.”