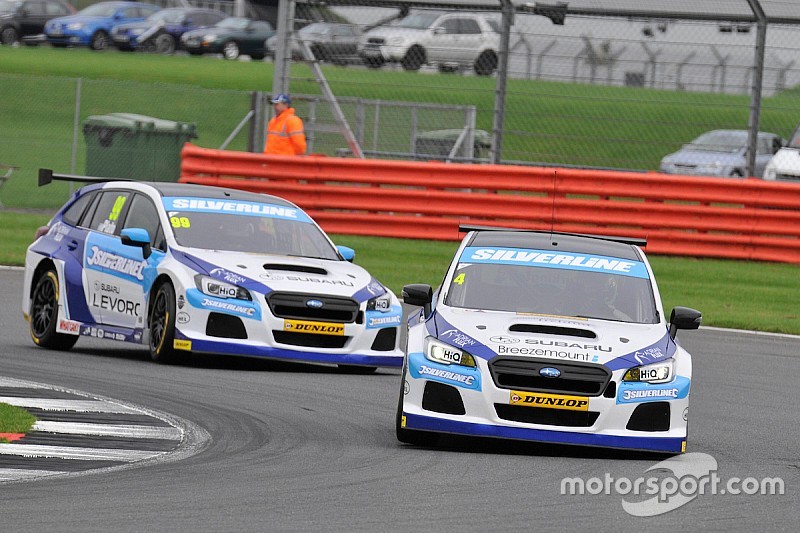 Colin Turkington took a second BTCC win at Brands Hatch to close up to just 10 points behind championship leader Sam Tordoff, with four drivers entering the final race in contention for the crown.

The BMR Subaru driver led from pole position ahead of Handy Motorsport’s Rob Austin at the start, while Turkington's teammate Jason Plato had a great start from fourth on the grid to move up to third.

Honda teammates Gordon Shedden and Matt Neal were up to fifth and sixth, with Neal setting the fastest lap on lap three before his Civic Type-R’s engine cut-out on the way down through Paddock Hill.

The triple-champion was able to get the system restarted outside of Druids, but he was hit by the MG of Ashley Sutton and knocked into the barriers towards Graham Hill bend.

That left Neal stranded in the middle of the circuit, bringing out the safety car - with Neal's championship challenge effectively, although not mathematically, over.

When the race restarted, the surviving Honda of Shedden quickly passed Josh Cook’s MG for fourth, while Plato moved ahead of Austin’s Toyota at Surtees. Shedden followed through on lap eight, with Plato then quickly closing down teammate Turkington.

With no team orders seemingly in play, Plato harried Turkington for the lead throughout the next five laps, which allowed the pack to close in and for them both to be threatened by the Honda of Shedden.

Austin’s Toyota slowed with two laps to go, promoting Cook to fourth and West Surrey Racing’s Tordoff to fifth, helping the BMW driver to score critical points in the championship.

Turkington went on to win the race by just over a second ahead of Plato, who fell back in the final two laps, Shedden completing the podium for Honda.

In the championship, the number of potential champions is down to four, with Tordoff still leading the championship just two points ahead of Shedden. Turkington lies 10 behind and Neal 20 behind, with just 22 points on offer from the final race of the day.

The top seven finishers will be reversed for Race 3, with Mat Jackson starting on pole position in the Motorbase Ford ahead of Aiden Moffat’s Mercedes.