Ash Sutton scored his first win of the BTCC season at Brands Hatch as Colin Turkington spun down to 25th to give Dan Cammish the points lead. 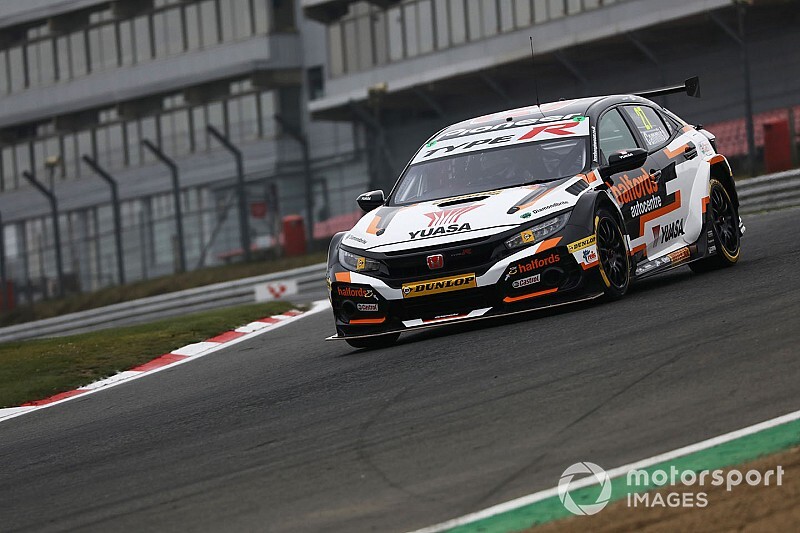 In what is expected to be the final outing for the Subaru Levorg, greasy conditions allowed Sutton to soar from 11th on the grid to win over Andrew Jordan by 5.223s.

But the major talking point was first-lap contact between Turkington and Matt Neal, which spun the WSR driver out of second position and he now trails Cammish by eight points ahead of the final race of the season.

As polesitter Cammish and Neal made laboured starts, Turkington had a lightening getaway from fifth to launch past Neal into Paddock Hill Bend.

He tried to pass Cammish also but yielded, with the Honda driver slow through Druids to allow Neal to close back up.

On the approach to Graham Hill Bend, Turkington covered the inside line in defense but made contact with Neal.

That sent the BMW spinning over the grass on the exit and he rejoined down in 27th position.

The race was then neutralised for an incident involving his teammate Tom Oliphant.

As Jack Goff suffered oversteer on the exit of Paddock Hill Bend he tagged Oliphant’s rear and sent the BMW spinning across the track, where he was collected by the unsighted Adam Morgan.

Turkington dived into the pits for slick tyres, but only on the final lap did Jake Hill – also on slicks – set the race’s fastest lap so the reigning championship recovered to just 25th.

"I think it’s clearly a professional foul and a red card offense," said Turkington. "I’m really frustrated that a full season’s work has been taken away in one moment. Matt (Neal) is one of the guys you have a bit more trust with.

"I thought he’d have respected where I was a bit more. If it was a Honda and not a BMW would he have hit the Honda?

"I would have thought he’d have held the brake a bit longer. It takes me out of the championship and it’s extremely selfish on his behalf."

Cammish made a clean restart, while Sutton deprived Tom Chilton of position in to Hawthorns as the ballast free Subaru continued to climb.

He then passed Neal at Surtees on the inside and immediately caught Cammish, who did little to prevent Sutton from passing into Clearways for the lead.

Despite another safety car when a slick-shod Mark Blundell binned his Audi into the gravel at Druids, Sutton was unchallenged to a 5s win.

Jordan crossed the line in second, having moved past Mike Bushell at Paddock Hill Bend before tangling also with Neal for third.

The BMW driver then caught Cammish and outdragged him down the main straight to pass his title rival – ending up five points off Turkington on 305, with Cammish on 318.

Cammish hung on to third ahead of teammate Neal.

Jason Plato was a late climber and latched on to the rear of Neal, but at Hawthorns he lost the rear of his Vauxhall Astra.

He pinned the throttle to drag it back on track but fell behind Tom Chilton and Ollie Jackson for seventh place.

Michael Caine scored the best result of his BTCC comeback in eighth ahead of Rory Butcher – who claimed the Independent drivers’ championship over Josh Cook.

Stephen Jelley rounded out the top 10, ahead of Senna Proctor who was drawn on pole for the partially reversed race three grid.

Vinales: Yamaha can be “one complete MotoGP team” post-Rossi

Vinales: Yamaha can be “one complete MotoGP team” post-Rossi