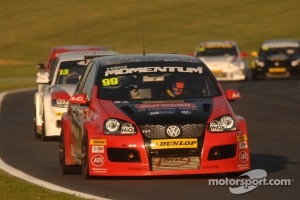 The AmD Milltek Racing.com team again showed strong pace during its second home meeting of the Dunlop MSA British Touring Car Championship season at Brands Hatch, only to come away from the penultimate meeting of the year without a top ten finish.

The West Thurrock-based team went into the weekend keen to add to the points finishes it claimed earlier in the year, with Colchester-racer Martin Byford making his first appearance on the longer Grand Prix layout since 2003.

Martin qualified in 19th place at the wheel of his turbo-powered VW Golf but made strong early progress to make up two places through the opening laps. However, the failure of the coil pack on the car saw Martin forced to make an unscheduled trip the pits for a replacement, which in turn dropped him down to the rear of the field.

Rejoining just ahead of the leading Chevrolet of Jason Plato, Byford was forced to pull over to allow both Plato and Alex MacDowall through to lap his Golf but he was then able to keep pace with the leaders before ending the race in 22nd place.

A good start to race two saw Martin make up three places on the opening lap alone and he continued to make good progress to move into 15th position by the tenth lap. Almost matching the pace of cars running inside the top ten, Martin crossed the line in 15th place, ahead of the Vauxhall of Andrew Jordan, which took a race victory earlier in the season.

The final race of the weekend again saw Martin showing the pace to run towards the top ten, but his hopes of improving on his race two result were hit by contact from the SEAT of Dave Newsham early on and he crossed the line in 17th place, having once again set lap-times comparable with drivers inside the top ten despite braking issues as the race wore on.

“It’s been tough weekend for us this weekend,” he said. “I think I’ve been on the pace and have driven well but track position is vital when the series is as competitive as it is at the moment. Without the problem in race one, we’d have probably finished around eleventh of twelfth which would have really set us up for two good results in the following races and we could well have broken into the points.

“However, to get three finishes is good as it’s more mileage for me in the car and I feel more at home in the Golf every time I go out on track. It’s just a shame there is only one race weekend to come before the season ends.”

Team boss Shaun Hollamby said he was once again pleased with the pace shown by Martin on track, even if his performances at the wheel weren’t rewarded with a maiden top ten finish.

“Martin has shown good pace again, but we’ve just not come away from the weekend with the results to match,” he said. “We would probably have been on the cusp of the points finishes in race one and its frustrating that it was a relatively minor thing that meant we had to bring Martin in for a pit-stop, but the coil pack failing is just one of those things that happens sometimes.

“To come from 22nd to 15th in race two was good and showed the pace in the car and it was a solid performance in race three considering that the brakes were going spongy on the car and making it more difficult to drive. We’ve just got to go to Silverstone for the final rounds and focus on trying to end the year on a high.”