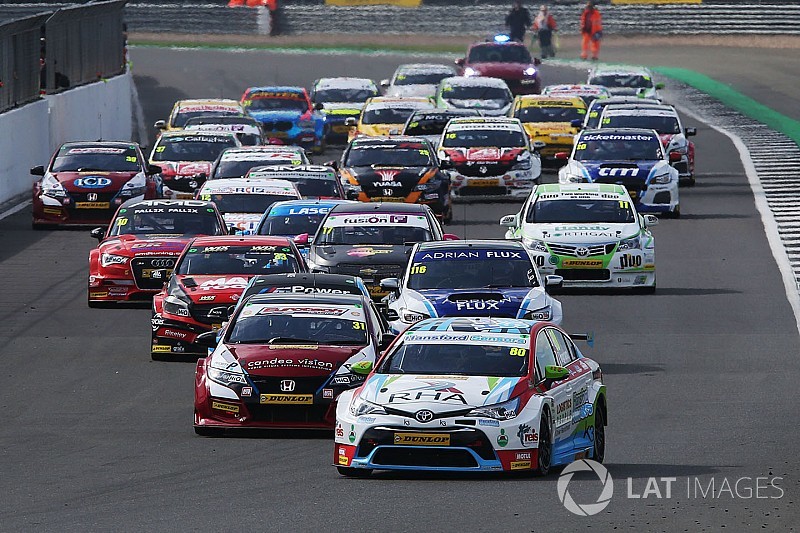 BTCC series director Alan Gow says the championship could make it easier to hand drivers race bans to discourage the amount of contact seen this year.

Five drivers picked up penalties across the Silverstone weekend, while MG driver Josh Cook sat out Sunday's first race after he had received a one-race ban for an incident at the previous Rockingham round.

Rob Collard and Will Burns were taken to hospital after they were involved in a huge accident in race one, as a result of Collard being tagged, but were both discharged on Sunday evening.

“I’m not happy at all with the amount of contact and resulting body damage – despite the fact that we have clearly been increasing the amount and severity of penalties for driving infringements,” said Gow. “We’ve had more and greater penalties this year than in any season I can remember.

“When there are 32 cars blanketed by just nine tenths during qualifying then it’s almost inevitable that some degree of minor contact and mistakes will occur – some drivers are truly superb to watch in close duels, but many simply don’t give enough ‘racing room’ to each other."

Gow said the series was prepared to be stricter on future incidents to deter drivers from making contact.

“We will keep issuing increasingly tougher penalties where it is warranted, but by then of course the incident has already occurred," he added.

"The harsh reality is that it’s the drivers themselves who have to take sole responsibility for their own actions. We have a teams meeting next month and this subject will be at the very top of my agenda.

"I’m in favour of ‘lowering the bar’ even further in terms of drivers accruing a race ban, along with introducing other harsher sanctions, and I look forward to hearing what the teams and drivers will also do to help us remove unnecessary contact.

"It can actually be changed quite quickly, largely with a simple change in mindset and attitude from some drivers and teams. We will sort it out.”

WSR team principal Dick Bennetts said his drivers had suffered at the hands of "poor" standards from other competitors.

“The positive from this weekend is that we’ve maintained our lead in both the teams’ and manufacturers’ championships and seen Colin close in a little on top spot in the drivers’ title," said Bennetts.

"The negative has been the poor driving standards throughout the field that have cost Colin the chance to regain the lead of the championship and put Rob in hospital. Thankfully Rob’s OK, but the team now face a real race against time to get his car ready for Brands Hatch in a fortnight.”