Gordon Shedden cruised to victory from reversed-grid pole in the final British Touring Car Championship race of the day at Croft.

The Scottish three-time champion drove his Team Dynamics Honda Civic Type R away on the opening lap to the tune of 1.545 seconds, was over 2s to the good by the end of lap two, extended the margin beyond 3s, and finished 2.528s in front.

It was a strong comeback for Shedden, who had suspension damage from a clash with Ash Sutton in the opening race, and then battled his way to 12th – and the critical reversed-grid pole – in race two.

He was helped on the opening lap by the antics behind. Shedden’s brother-in-law Rory Butcher passed Tom Chilton around the outside at the first turn, and then attempted to emulate that move on Stephen Jelley.

But Butcher and Jelley ran wide and cut the chicane, and Butcher rejoined onto the back straight in front of Josh Cook.

Butcher then backed off and allowed Cook back ahead, but Shedden had already made the break.

“I looked in my mirrors at the exit of Turn 2 and I had 50 or 100 metres on them, and it was a cruise to the end,” said Shedden. “They all got into each other, but this was one of those times when the cards fall your way.

“My car’s been fantastic all weekend, and that’s why I was so disappointed in race one – I thought it was weekend ruined. I just feel that we should have had more today. We were in a position to score high in all three races, but at least we salvaged something.” 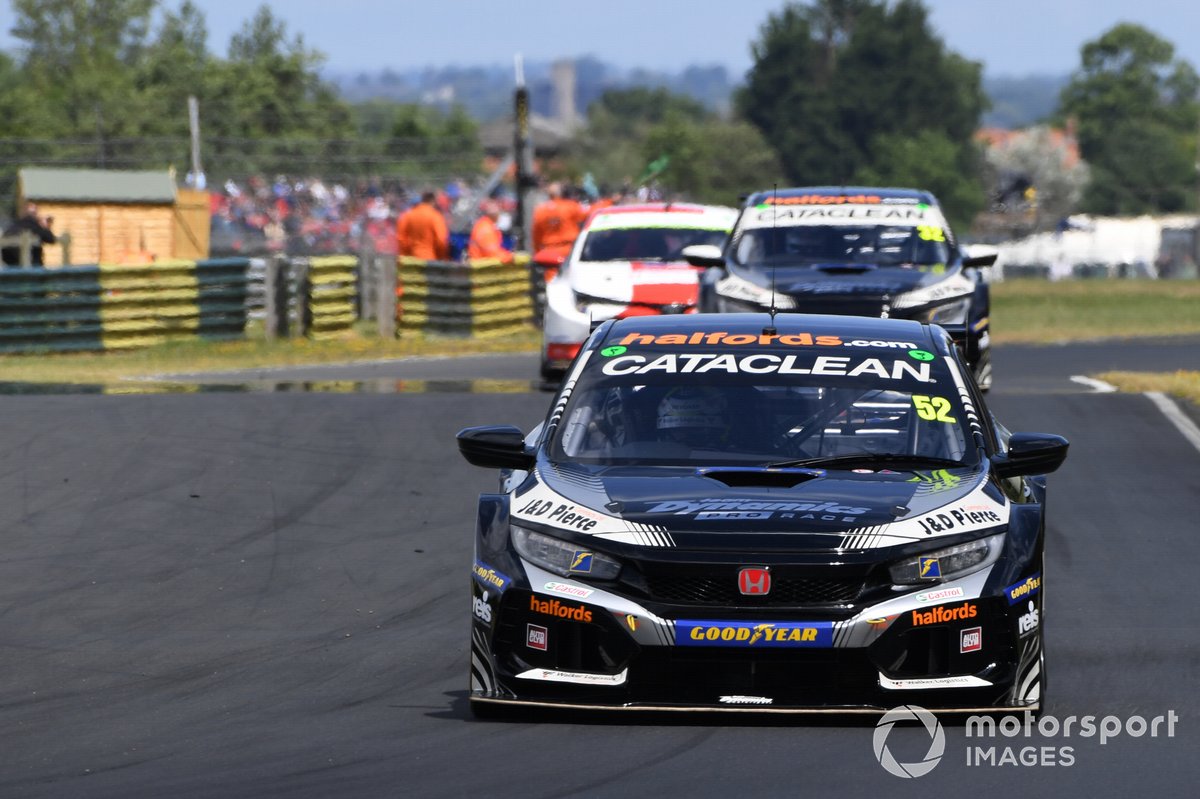 Cook has been struggling with straightline speed on his BTC Racing Honda, which uses the TOCA customer engine instead of the bespoke Neil Brown Honda units in the Dynamics Civics, all weekend.

But he used his terrific racecraft to fend off the Speedworks Motorsport Toyota Corolla of Butcher – also TOCA powered – for second.

This included a dive by Butcher down the inside of Tower on the second lap, but the Toyota ran wide and Cook got back ahead on the exit.

Butcher in turn had Jelley’s West Surrey Racing BMW 330e M Sport breathing down his neck, but he kept the Leicester man behind to complete the podium.

Jelley’s team-mates Jake Hill and Colin Turkington were next. Hill had to battle his way past the Laser Tools Racing Infiniti Q50 of Aiden Moffat, who then pitted with a flapping bonnet.

By the time Hill had done this the top four were long gone, but he and Turkington reeled them in towards the finish.

Dan Rowbottom should have been next in his Dynamics Honda, but a puncture caused his late retirement, promoting new series leader Tom Ingram (Excelr8 Motorsport Hyundai i30 N) to seventh, whose advantage over Cook was cut to three points.

Dan Lloyd, winner of the opening two races, struggled to 11th with an overheating engine on his Excelr8 Hyundai.

Ash Sutton was forced into a lengthy pitstop after contact with Chilton on the third lap caused damaged suspension plates on his Motorbase Ford.

BTCC Croft: Lloyd doubles up to beat Ingram in Hyundai 1-2