Ash Sutton won a thrilling battle with Colin Turkington in the second British Touring Car Championship race of the day at Knockhill.

By:
Marcus Simmons
Translated by:
Charles Bradley
Listen to this article

Turkington, dominant winner of the opening race, led into the final lap at the wheel of his West Surrey Racing-run BMW 330i M Sport, but a small mistake at the chicane sent him skimming the gravel trap, and Sutton took advantage to extend his championship lead.

As the first-race victor, Turkington was carrying the maximum 75kg of success ballast on his BMW, while Sutton started from fourth on the grid with 48kg aboard his Laser Tools Racing Infiniti Q50. Third-starter Josh Cook and Sutton both passed front-row man Senna Proctor at Clark’s on the opening lap, but the race quickly went under safety-car conditions.

Cook had gone against the grain among the leading contenders by choosing the option medium Goodyears on his BTC Racing Honda Civic Type R, while the others at the front were on the regular softs.

Cook, with 57kg of success weight on his Honda, survived for two laps after the restart, before Sutton executed a clinical move at the hairpin to move up to second. At this point, Sutton was 1.3 seconds behind Turkington, but the reigning champion chipped away at the gap, and six laps later he was forcing Turkington to defend.

Turkington appeared to be stemming the tide, and when another safety car came late in the race he appeared to potentially be off the hook completely. But the green flags flew with three laps remaining, and again Sutton launched an attack.

Turkington was equal to everything Sutton could throw at him until the final tour, when he appeared to run a little wide at the second apex of the chicane, and ran out of road on the exit.

The Northern Irishman only just recovered in time to keep third-placed Jake Hill at bay, as Sutton took the flag by 1.043s.

“We had a tough task because Colin has been mega all weekend,” said Sutton, who has recovered from food poisoning that hampered him in Saturday qualifying. “I knew we had the edge on pace, and once I got up to second it was knuckle down, fire in the qualifying laps.

“Once you look in your mirrors [as Turkington did], there’s only one way you’re going unfortunately.” 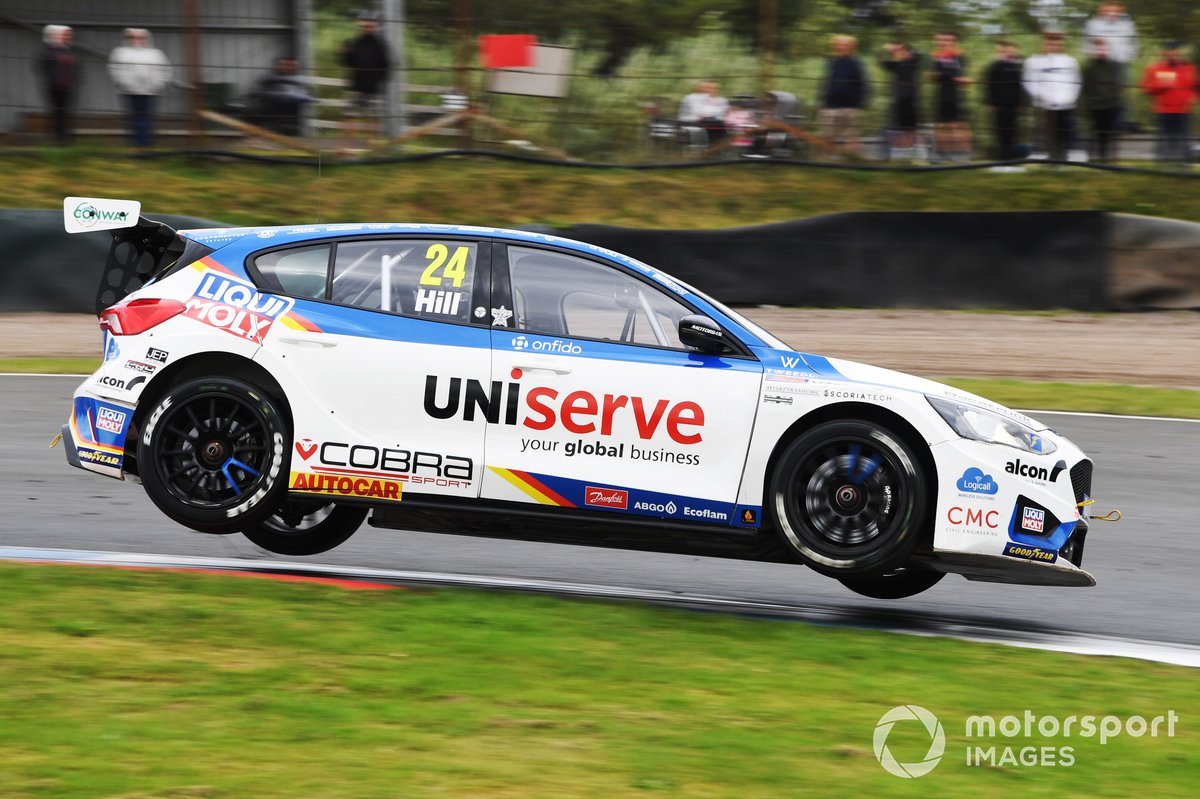 Hill, carrying 33kg success weight on his Motorbase-run MB Motorsport Ford Focus, quickly followed Sutton past Cook, and could have nosed his way into the lead battle had he not had the lapped Hyundai of Rick Parfitt to clear at the final restart.

Cook did a strong job on heavy weight and the unfavourable tyre to take fourth ahead of the Team Dynamics Honda of Gordon Shedden.

The battle behind the leading contenders blew up with a collision between Aiden Moffat’s LTR Infiniti and the Speedworks Motorsport-run Toyota Corolla of Rory Butcher. Butcher had got the run on Moffat out of the hairpin, and had the inside line for Duffus Dip, but Moffat had nowhere to go on the outside.

The contact turned Butcher around, and he scudded across the gravel and thumped the barriers, while Moffat was also delayed.

That moved Tom Ingram’s Excelr8 Motorsport Hyundai i30 N up to seventh for the restart, and he then demoted Proctor to grab sixth at the finish.

Sutton drew the number 9 out of the ball bag, no doubt to the chagrin of team-mates Boardley and Moffat, meaning Jelley starts the reversed-grid finale from pole.

The first safety car came after a dramatic start: Chris Smiley stalled his Excelr8 Hyundai from fifth on the grid and was just getting going when, on the other side of the track, Tom Oliphant unavoidably collected Nicolas Hamilton and sent the Team Hard Cupra bouncing heavily off the pitwall.