A record 30 cars are set to contest the final meeting of the 2011 Dunlop MSA British Touring Car Championship at the home of British motorsport: Silverstone. Mathematically 5 drivers are still in with a shout of the title although realistically it will come down to Honda Racing pair Matt Neal, who leads team mate Gordon Shedden by 5 points and Silverline Chevrolet driver Jason Plato, who is tied with Shedden.

The other two contenders James Nash for Triple 8 and Mat Jackson of Airwaves Racing are more likely to fight it out for Independent honours with their teams also locked in a battle for Independent teams trophy. The 2011 Team's main trophy and Manufacturers/constructors award are already secured by Honda Racing.

But there is still one piece of the jigsaw missing...

Neal is the expert’s choice to take his third BTCC title to add to his 2005/06 crowns and Neal admits he can now go for it having secured both titles already for Honda Racing and said, “winning those titles was our main focus this season and it was fantastic to achieve that. But there is still one piece of the jigsaw missing, which is the drivers title and we’ll go for that as well.”

No Honda works driver has taken the title before however Shedden hopes that he will be the one not only to take Honda’s first drivers crown but his as well and said of the five way tussle, “it’s going to get a bit tense on the day, but I do have experience of being in the fight from last year. I know I have a race winning car under me, so let’s hope I can add to the silverware already achieved.”

Despite being the man in form, reigning BTCC Champion Plato believes he is the outsider to take his third championship with the Turbo cars being suited to the long straights and admits he hopes from help from above on Sunday and said, “Even if my team and I do a perfect job, it will still need a spot of Divine Intervention for us to beat the turbo cars on this particular circuit. “They have more power and Silverstone is a power circuit. Sixty-eight per cent of the lap is spent at full throttle.”

Despite still being able to win the championship understandably being 36 and 44 points behind Neal, Jackson and Nash will be looking at the Independent title as their main aim for the weekend. Jackson despite leading both Independent and main driver’s title goes into the event 17points behind Nash after a 6 race slump which saw him take 1 point in 6 races. 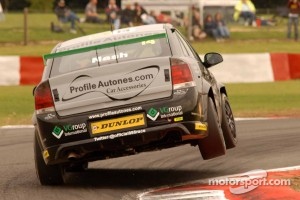 However at Brands Hatch last time out Jackson was back on form and hopes for three big race finishes and said, "The Independents is a realistic target, but the best way to go about winning that is to go for the big results instead of cruising around for points – it's a tactic that can backfire on you really badly and it's not the way I race.”

Nash over the course of the season has built up a fine reputation as a constant finisher inside the top 10 23 times out of 27 races so far. This will also mark Triple 8 Racing’s final appearance in the Vauxhall Vectra which they have used since 2007 taking them two driver’s crowns and 3 Manufacturer and teams championships and Nash hopes to add to these achievements and said, “I’m really looking forward to Silverstone, my local circuit. While I might have an outside chance of the overall title, my own focus will be getting the job done in the Independents Trophy. I see no reason to change my style – it's what has got me here, after all. I’m going to Silverstone to win as always and I will look at the points table afterwards.”

As already reported earlier in the week former double champion James Thompson will be back racing for Airwaves Racing in a bid to secure Jackson and Motorbase Independent titles. Thompson tested the car earlier in the week and admitted afterwards he is now fired up for his BTCC return and said, “I’ve really enjoyed the day and it’s got me fired up with even more enthusiasm for the weekend. It’s never easy coming in for just one round but I hope to be right in the thick of the action. It’s pretty clear what my job is for Airwaves and, while I don’t want to ruin what the other guys have built up over the season, they need to be mindful of me. “I’m certainly not going to wave them past. I’m going to race hard but fair like I always do and try and put on a show for the fans.”

With many of the leading teams in the series set to go full NGTC next season Silverstone marks the last opportunity perhaps for Frank Wrathall and Rob Austin to make history and become the first driver to win in a New Generation Touring spec car. Both have come close this year with a second each and Austin admits its win or bust in his own run Audi A4 and said, “Win or bust – that’s the approach I’m taking at Silverstone. A number of factors which we’ve come to understand more meant the car didn’t work around Brands. But I’m hopeful it will be more suited to Silverstone, as it was at Rockingham.

Dynojet racer Wrathall also believes he is set for a strong end to the season in his Toyota Avensis and said, “As everyone has seen the car has come on really strong in the second half of the season and we’ve been capable of getting in among the title contenders on numerous occasions. If we’re able to get everything right and everything falls into place, there’s no reason why we can’t again at Silverstone this weekend. I’m just going to concentrate on my own performance and everybody within the team is determined to get some good finishes.” 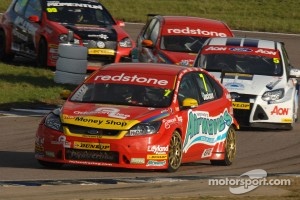 One of the drivers moving to full NGTC spec is Pirtek Racing with Andrew Jordan after they announced they will take delivery of two customer’s new spec Honda Civics built by Team Dynamics. After a fantastic start to the season things haven’t gone to plan in the second half of the season for Jordan particularly last time out at Brands after he thought his luck had changed by qualifying on the front row of the grid mechanical issues prevented him from taking the start of the race. Jordan has raced the Vectra for the past 3 seasons, once as a works driver for Vauxhall and for the past two years with Pirtek Racing, and hopes to send the car in which he has won 3 times off in style and said, “I’d really like to give the Vectra a good send off by qualifying in the top four or five and getting a couple of podiums or race wins. We were strong around Silverstone last year so I expect to be competitive again.”

As the Vauxhall Vectra takes its bow in the series we will see for the first time a new Vauxhall, the Insignia, make its debut built to NGTC specification run by Vauxhall specialists Thorney Motorsport. Team owner John Thorne will pilot the striking new car with Batman logos on the car and said the following about why the all black car has Batman logos and his hopes for the weekend and said, " the livery is a one off as so many people thought it looked like the Batmobile anyway and seeing as we are looking for a new title sponsor for next season (our 5 year deal with Tesco Momentum 99 comes to an end this year) we thought we'd do something different for Silverstone. We’ve built the Insignia with the view of completing a full season in 2012 after a winter of testing. And, while I hope to test on Friday we’re treating Silverstone’s final round purely as a shakedown. We won’t set ourselves any targets in terms of results but if we can finish all three races we’ll be absolutely delighted.”

Also making its debut will be a turbo engine in the front of a BMW with Tony Gilham at last getting to drive his Geoff Steel Racing BMW with turbo power. The team had hoped to run it for the first time at Brands Hatch but narrowly ran out of time. However the team ran the engine for the first time this week at Donington Park with 2009 BTCC champion and regular BMW driver Colin Turkington at the wheel. Speaking after the test team boss and former BTCC racer Martyn Bell said, “So far so good. Colin’s expertise in BMWs made him the perfect driver to call on to offer advice and set-up tips. Tony can’t wait to get in it!”

So that concludes the bumper grid for the season finale. If the 5 way title showdown wasn’t exciting enough then add 30 cars into the mix and we’re certainly in for a thriller. So for full news from qualifying tomorrow, be sure to return to motorsport.com as well making sure not to miss our special champion report Sunday night and full reports and images Monday. 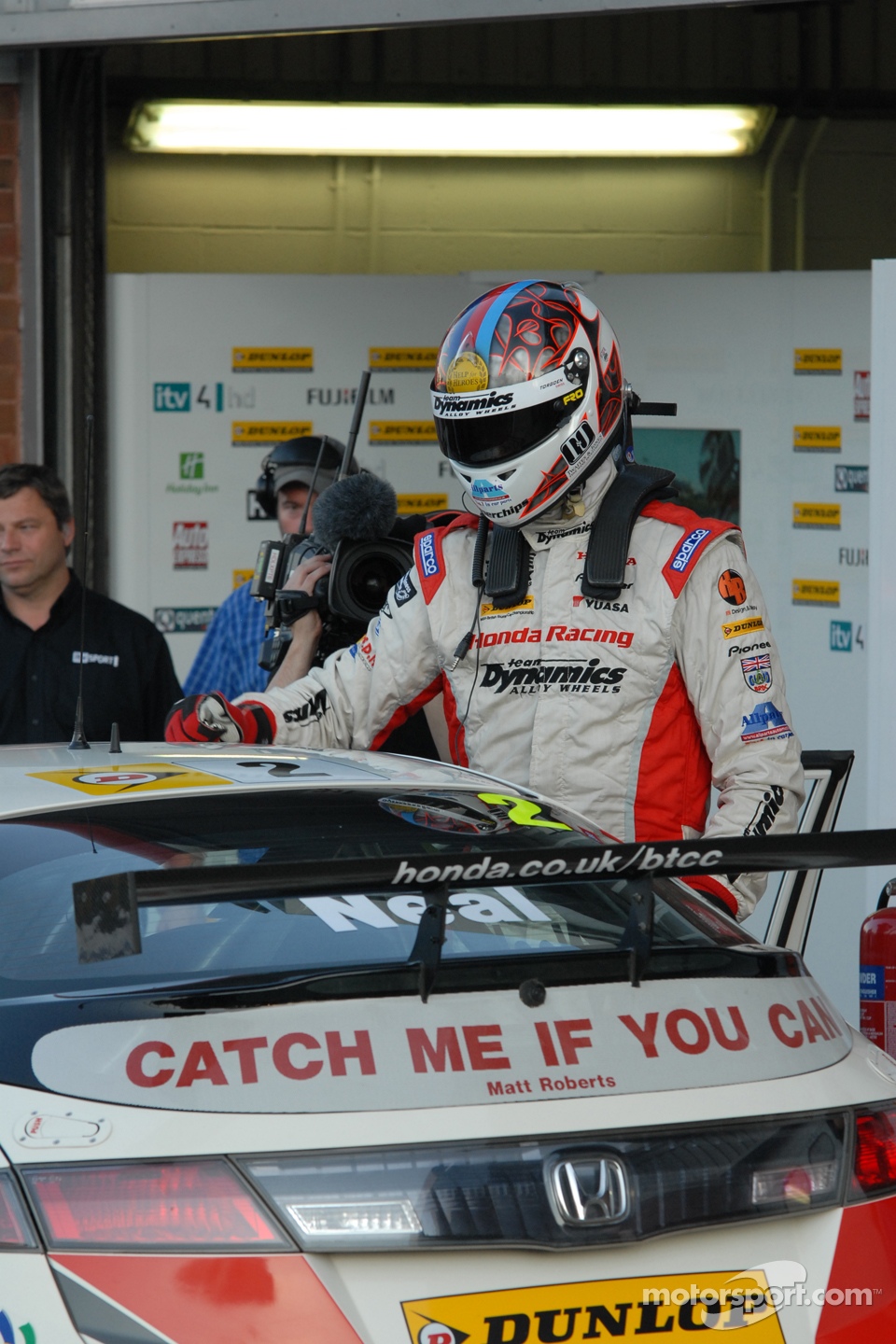 Johnson off weekend notes and quotes

BTCC: Hill wins Race 2 at Croft ahead of Moffat and Cook

Johnson off weekend notes and quotes