Strong Performance On A Tough Weekend For Team ES Racing 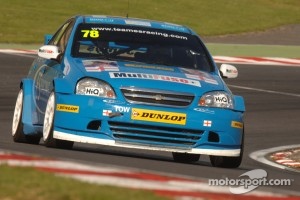 Team ES Racing had some positive results from a tough weekend at Brands Hatch for the latest rounds of the Dunlop MSA British Touring Car Championship as it tackled the full GP layout on an unusually warm October weekend.

Saturday was a day to forget for the team; despite the free practice sessions interrupted with problems, Chris James headed in to Qualifying in a positive mood. Unfortunately for the Luton-based driver it was to prove disappointing after a part failure led to the front wheel coming off the car at a high-speed section of the circuit.

“The wheel coming off at 130mph was really frustrating, I thought at first it was just a puncture but then the suspension and brakes dug into the ground causing the car to spin and flip me into the wall. Said James, before adding “This obviously caused considerable damage and we were all bitterly disappointed.”

The resulting damage meant the team had a tough job ahead of them to get the car race ready and worked through the evening until midnight before heading back to the circuit at 6am on Sunday. “I cannot praise the team enough, there was fantastic morale and it was a great team effort” said James.

Sunday saw another heat-wave and an eventful first race would see James finish in 20th position from 29th on the grid. The second race saw the turbo cars back in control of the race meaning James would finish in 25th position.

The final race of the day saw a spirited drive by James as he fought the works Chevrolet of Alex MacDowall for position. Despite the RML Chervolet driver passing the #78 Lacetti James would fight back and take position back from MacDowall. As the laps counted down James kept John George and Chris Swanwick at bay to finish 19th.