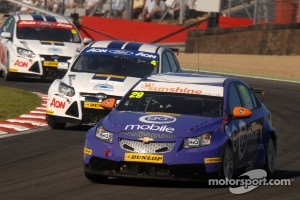 The GoMobileUK.com with Tech-Speed Motorsport team continued its strong recent form in the Dunlop MSA British Touring Car Championship with another brace of top six finishes on the penultimate weekend of the season at Brands Hatch.

Widnes-racer Paul O’Neill came close to matching the podium finish he secured on the shorter Brands Hatch Indy circuit earlier in the year, while Guernsey-based team-mate John George enjoyed one of his most competitive weekend’s of the season at the wheel of the second Chevrolet Cruze run by the Leamington Spa-based team.

Paul qualified eighth on the grid in a session affected by two red flag stoppages, but a strong opening lap to race one saw him climb up to seventh place. Holding the Ford of Tom Onslow-Cole at bay through the early stages, Paul then started to put championship leader Gordon Shedden under pressure and moved into sixth on lap seven when the Honda man slid wide at Graham Hill Bend. A puncture for Matt Neal then moved Paul into fifth but with Onslow-Cole able to find a way through before he finish, he had to settle for sixth place at the chequered flag.

From sixth on the grid for race two, Paul made up a place on the opening lap and set about fighting for position with the works Cruze of Alex MacDowall, eventually finding a way past on lap ten just seconds before MacDowall’s car was forced off in a cloud of smoke with engine problems; with Paul lucky to avoid being hit by MacDowall’s car as it went off at Surtees. Although he closed onto the rear of Onslow-Cole ahead, Paul was unable to find a way ahead of the Ford and crossed the line in fourth place.

The reverse grid draw put Paul seventh on the grid for the final race of the weekend, but another strong start saw his Chevrolet up to sixth off the line, and he then got ahead of Nick Foster’s BMW on lap two to move into fifth. Putting pressure on the Vauxhall of James Nash for fourth, Paul looked set to challenge for position before driveshaft failure put him into retirement on the tenth lap.

Despite that, he retains ninth in the championship standings and has closed on Rob Collard in the fight for fifth amongst the Independent runners with three races to come at Silverstone.

“It was a good weekend for us, but we were only six laps from it being a fantastic weekend,” he said. “The car had been a bit nervous in qualifying but we sorted that for race day and it was really strong. If we’d been a few places higher on the grid then we could well have come away from Brands Hatch with a couple of podium finishes and if it hadn’t been for the problem in race three, I think we’d definitely have had a podium finish there.

“The team has given its all this weekend and the boys can be proud of the performance they’ve put in. It’s a shame that it ended with a DNF, but these things happen in racing. We’ve shown strong pace again and have been on the cusp of the top three throughout race day.”

Team-mate John had qualified 23rd on the grid, with his focus for the first race being on making forward progress through the field. Making up one place on the opening lap, John spent the entire race pressurising the Audi of Rob Austin – which finished on the podium last time out at Rockingham – the pair progressing up the order; John eventually taking the chequered flag in 14th place.

With a number of quicker cars behind him on the grid for race two, John enjoyed a solid race to finish in 20th place and looked set to add another top 20 finish to his tally in race three before being forced to take avoiding action when Chris James and Alex MacDowall nearly got together going into Surtees as the three drivers battled for position.

The resultant spin dropped John to the back of the field and he had to settle for 21st at the finish having managed to fight his way ahead of the Toyota of Tony Hughes.

“I’ve had a tough run recently but this weekend was much better,” he said. “I’ve been much more competitive and the results have been improved as a result. The car was brilliant in races one and two and to come from 23rd to 14th in the first race was something I really enjoyed. Race two was a good run and I felt comfortable in the car and its just a shame about race three but I had no option but to take avoiding action when MacDowall locked up ahead of me.

“This weekend has boosted my confidence 100 per cent. I’ve battled against some good drivers and have set some decent lap times all weekend and it would seem that they have now got the equivalency between the turbo and normally-aspirated cars about right.”

Paul’s strong results in the opening two races of the weekend have allowed the team to maintain eighth place in the HiQ Teams’ Championship and sixth in the Independents Team Trophy ahead of the final three races of the year, with team boss Marvin Humphries happy with the performance over the penultimate weekend of the season.

“It’s been another weekend we can be happy with after Rockingham,” he said. “We’ve shown good competitiveness with the car and have secured some good coverage for the sponsors, which is always important. Paul drove really well in race one and in race two, and it’s a bit disappointing that a mechanical problem robbed him of at least fourth in the final race but these things happen.

“John enjoyed a much better weekend too, despite the fact he got punted a few times in the races today and had the spin in race three. His first race in particular was good and this weekend has probably been his most competitive so far, and on one of the most challenging circuits on the calendar.”

BTCC: Half of all teams fined for bizarre tyre mix-up at Croft