Tech-Speed Pair Aim To End On A High At Silverstone 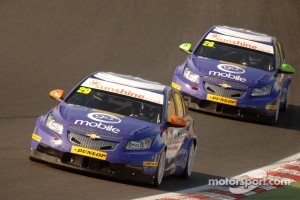 GoMobileUK.com with Tech-Speed Motorsport will hope to end the 2011 Dunlop MSA British Touring Car Championship season on a high this weekend when the final rounds of the year take place at Silverstone.

The team goes into the weekend on the back of a series of strong results in recent races and will now aim to head into the winter with more points finishes with its Chevrolet Cruzes around the short National layout at the ‘Home of British Motorsport’.

Widnes-racer Paul O’Neill arrives at Silverstone on the back of a brace of top six finishes last time out at Brands Hatch, with a mechanical issue in the final race preventing him from fighting for a fourth podium finish of the season.

While the long straights at Silverstone could play into the hands of those cars running a turbo engine, Paul heads into the weekend in confident mood as he seeks to bring home more points for the Leamington Spa-based team.

“I’m looking forward to the weekend and my aim is to get three decent finishes to end the year on a high,” he said. “We know it will be tough at Silverstone but you never know what will happen, especially when it’s the final rounds of the season. We might well lose out to the turbo cars on the straights but our car has its strengths through the corners; we just maybe can’t use that strength as much at Silverstone as we could do elsewhere.

“I’ll be driving flat out to the finish to try and bring home some good results for the team and hopefully we’ll be rewarded.”

Guernsey-based team-mate John George picked up three good finishes at Brands Hatch a fortnight ago and will also hope to end his season on a high.

Although yet to break into the top ten in a bumper field, John goes into the weekend with his confidence boosted by his Brands Hatch performance and he will aim for another solid showing to bring his season to a close.

“I really enjoy the National Circuit and last year I was going really well until I got taken off when I was on to score some good points,” he said. “This year, I think we might lose out compared to the turbos on the straights so I’m not really sure what to expect and it’s difficult to make predictions. Hopefully I’ll be able to race with the pack and my aim is to get as close to Paul on the times as I possibly can and then go from there.

“The fact the grid is so big this weekend is going to make it tough to break into the top ten and score some points but that won’t stop me trying. I’ll be pushing throughout and I’ll see what I get at the end of it.”