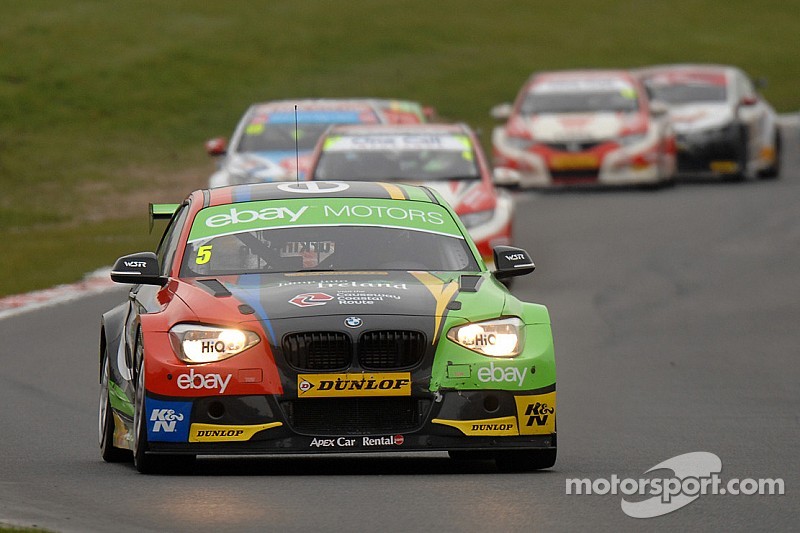 The Ulsterman came into the weekend with a relatively comfortable points margin, but had to overcome the challenge from MG’s Jason Plato – the most successful BTCC driver in history.

Plato laid down an immediate marker by claiming pole position ahead of his MG KX Clubcard Fuel Save team-mate Sam Tordoff, whilst Turkington had to settle for fourth on the grid behind Honda Yuasa Racing’s Gordon Shedden.

An action packed opening race commenced with a huge multi-car accident, as well as providing three different leaders in the opening half lap.

The car this year has been awesome, there hasn’t been one track where we’ve not been on the podium.

Pole-sitter Plato was jumped off the line by Tordoff, who then immediately had the BMW of Turkington blasting around his outside as the pack roared into Paddock Hill Bend for the first time.

There was drama behind after a coming together between the Airwaves Racing Ford Focus of Fabrizio Giovanardi and Shedden’s Honda Civic Tourer sparked a sequence of incidents in the pack.

Shedden’s machine slid sideways across the track following the contact and was hit heavily by the unsighted Rob Austin. Jack Goff’s VW was bumped from behind in the melee and briefly became airborne with both Dave Newsham and Alain Menu also involved.

Matt Neal’s Honda was another car collected in the incident, ending the triple-champion’s day as he was flown to hospital for a precautionary X-ray on his ribs.

When the dust eventually settled it was Plato leading from Tordoff, with Turkington in close pursuit. The MG duo held on for an impressive one-two but it wasn’t enough to deny 32-year-old Turkington from claiming his second BTCC title.

The most important thing for us is the manufacturer’s title – it’s a fantastic result, I’m dead chuffed, it’s been a great effort from Triple Eight and MG.

Turkington’s eBay Motors squad was ready in the pitlane to welcome its man home, as the West Surrey Racing-run team also secured the Teams’ and both Independents’ championships.

“I am over the moon,” said the new champion. “I wanted this more than ever and I was prepared to do whatever it took to win the title.

“I suppose the main feeling is relief. We were ready to do battle until race three so I really wasn’t expecting to clinch the title so early in the day. I actually thought I was a point short when I crossed the line so I didn’t want to celebrate until I was absolutely sure.

“To be able to celebrate with the team and my family is a really proud moment. Lewis [Colin's son] wasn’t old enough to remember the first one and part of the reason to get back into the BTCC was to do it for him, so I’m delighted.”

Race two was all about MG KX Clubcard Fuel Save securing the Manufacturers’ Championship but the encounter wasn’t without incident.

Plato finished first on the road but was later penalised for his involvement in a race-ending shunt for Turkington. The eBay Motors BMW led the way in the early running before contact from the MG behind sent Turkington spinning into retirement.

Airwaves Racing’s Mat Jackson took over the reins but his lead didn’t last long after the multiple race-winner spun it away of the exit of Hawthorns. Plato baulked up while Jackson was having his moment, allowing the BMW of Rob Collard to nip through.

Congratulations to Colin and WSR – they are totally deserving of the championship.

Changes for top spot were far from finished, however, after Morgan got past Plato before producing a stellar move by leader Collard at Paddock Hill Bend. Plato made it through too as the performance in Collard’s soft tyres began to drop.

Morgan then slid wide to seemingly hand victory to Plato before the latter’s post-race penalty gave the Mercedes driver a maiden success. Incredibly it was also the first overall win for the German marque in the BTCC.

“It’s brilliant,” beamed Morgan. “We’ve been praying for a podium for so long, so to get a win at the last event of the year is just fantastic.”

Shedden produced a master class in treacherous conditions in the season finale, ending a challenging campaign on a high for Honda Yuasa Racing.

Tin-top rookie Jack Clarke scored an incredible second placed finish after seeing off a number of challengers throughout the contest. The pole-sitter lost out to the fast-starting BMW of Nick Foster off the line but he retook the lead with a great move at Graham Hill Bend.

Shedden made light work of Foster and immediately set about attacking Clarke ahead of him. The 26-year-old held on well for a number of laps before the Scotsman slipped through on the exit of Hawthorns.

Jackson completed the podium, rounding off an excellent season for the multiple race-winner in which he completed all 30 encounters. It was a hat-trick of accomplishments for Ford drivers as Dave Newsham also collected the Jack Sears Trophy for making up the most places of any Independent driver throughout the campaign.

It was all eyes on Turkington after the final chequered flag of the season, however, as he took to the podium in front of a huge crowd and collected the much coveted BTCC trophy for the second time in his career.

The glittering occasion rounded off a record breaking and hugely successful 2014 Dunlop MSA British Touring Car Championship, which saw 31-cars take to the grid, including seven former champions. Such has been the competitiveness of the burgeoning series that Adam Morgan today became the 11th different race winner in 2014 – a year that has provided more victors than any other in the history of this illustrious championship.

So many drivers have made the top step of the podium during the season, but of course there can only be one champion, and that richly deserved accolade goes to eBay Motors star Colin Turkington.

2014 BTCC Champion Colin Turkington said: "The emotion is so hard to describe – it’s like no other feeling in the world. Under the surface there’s been so much pressure, that race felt just like the 2009 finale. The car this year has been awesome, there hasn’t been one track where we’ve not been on the podium."

Runner-up Jason Plato said: "Colin, the car and the team are world class – I've said it a few times that it would’ve been wrong for him to have a disaster – this is his moment, he deserves it and he needs to enjoy the moment. The most important thing for us is the manufacturer’s title – it’s a fantastic result, I’m dead chuffed, it’s been a great effort from Triple Eight and MG. Just reward for three years hard work? I think so. As a team, we’ve done a brilliant job. To come from not having a shell six weeks before the first race in 2012 to where we are last year and this year, we’ve been the dominant force."

Third placed driver Gordon Shedden said: “We had a bit of liquid sunshine that came to our aid in race three. The car was awesome – we were lucky to get back out after race one, the team did a great job and the win is for them. It’s a fantastic end to a tough day. Congratulations to Colin and WSR – they are totally deserving of the championship. We’re hoping to be back and racing the new Civic Type R next year – it looks absolutely awesome!”