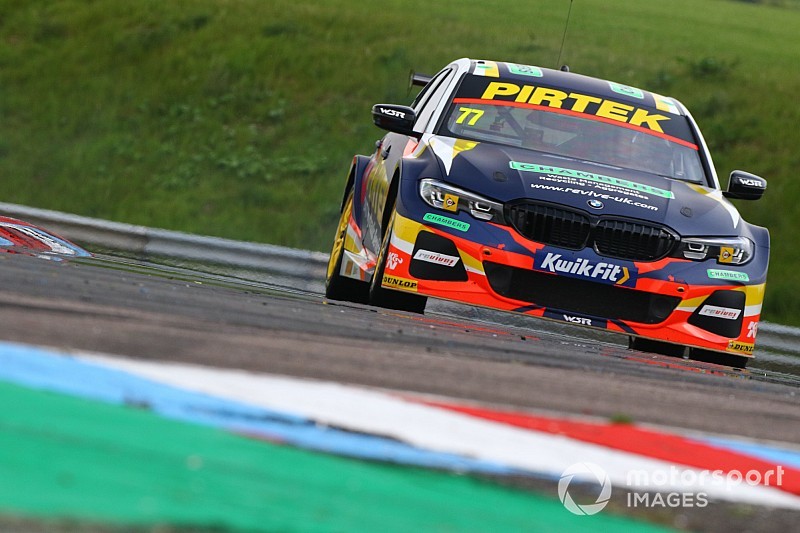 Andrew Jordan netted his fourth win of the 2019 BTCC season in the opening race at Croft, leading from lights to flag in a dominant display.

The WSR driver remained unchallenged from pole in his BMW and at the sole safety car restart to run onto the spoils over BTC Racing’s Chris Smiley by 1.835 seconds.

A rain shower in the lead up to the race looked as though it would favour double Thruxton victor Jordan’s closest front-wheel-drive rivals in Smiley and third-starting Tom Chilton.

But it remained dry enough for slick tyres and Jordan’s composed launched left Smiley to defend from Chilton and a fast-starting Colin Turkington.

The top four retained their grid order into Clervaux and stayed in formation for much of the race.

As the Honda of Smiley and Chilton’s Ford took time to warm their tyres Jordan was able to swiftly pull out a 1.2s lead on the first lap, which then rose to 1.9s.

But that was neutralised by a safety car, called when Rob Collard and Nic Hamilton spun at the exit of the chicane.

It led to a lengthy delay as Collard’s Vauxhall spun backwards into the tyre wall and its broken left-rear toe-link meant it had to be towed out of the mud before being lifted onto a recovery vehicle.

As a result, the race was extended by a maximum three laps, and Jordan’s clean restart meant he faced no threat to the flag and went to claim his 24th BTCC victory. He climbed from ninth to sixth in the standings as a result.

Tom Ingram finished as best of the field to run on the hard-compound tyres, progressing in his Speedworks-run Toyota Corolla from 15th up to 11th ahead of Jake Hill on the same rubber.

Stephen Jelley’s track limits indiscretion during qualifying dropped him to 18th but he recovered to 13th in his BMW, despite colliding with the Mercedes of Aidan Moffat at the final-corner hairpin.

Joint points leader coming into the race, Rory Butcher’s sizeable qualifying shunt relegated him to 29th on the grid but he fought through on the hard tyres up to 18th