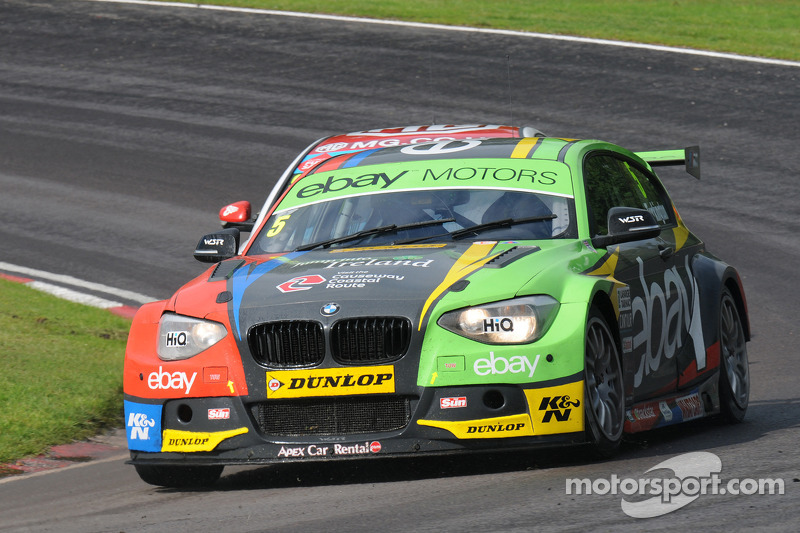 The Dunlop MSA British Touring Car Championship leader Colin Turkington has obliterated his own qualifying lap record on his way to securing pole position for tomorrow’s opening encounter at Croft. The eBay Motors driver scored his sole BTCC pole position of 2013 at the Yorkshire venue and he repeated the trick in some style this time around.

Turkington tussled for top spot with the MG of Jason Plato and Honda Civic of Andrew Jordan in the early running, but things changed again after a mid-session stoppage, which was caused when the spinning VW of Alain Menu dislodged a stack of tyres.

Portadown-based Turkington was already heading the order but he went on to cement the position with seven minutes to go. A fastest first sector was followed by another in the mid-section of the circuit, and when the timing screens went purple for a third time Turkington’s breathtaking time of 1:23.246s was confirmed – more than 1.2s quicker than his 2013 effort. 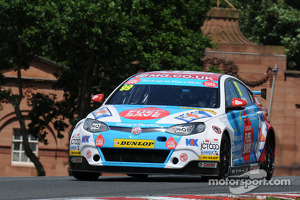 Such is the development throughout the competitive BTCC field, combined with the new-for-2014 Dunlop tyre construction, that the top 13 drivers all dipped under last year’s lap record.

Plato took second just as Honda Yuasa Racing joined the battle after what had been a fairly anonymous Saturday for the team up to that point. Gordon Shedden pipped his team-mate Matt Neal by just over a tenth as the manufacturer-backed duo produced a second row lock out ahead of Jordan, making it five former champions in the top five positions.

Rob Collard continued his rich vein of form as he backed-up his two podiums at Oulton Park with an impressive sixth in qualifying here. Collard relegated FP2 pace-setter Sam Tordoff down to seventh by just 0.014s, who in turn shuffled the Mercedes of Adam Morgan into eighth. Morgan had actually looked set to produce a potential front-row lap earlier in the session but his effort was scuppered by the aforementioned red flag midway through his flyer.

Alain Menu and Rob Austin completed the top ten positions with the latter having to bounce back from two sizeable accidents in the earlier practice sessions. To make matters worse Austin also lost his initial fastest lap due to a track limit infringement, as did Aron Smith, who eventually had to settle for 11th.

Colin Turkington said: "It was a really good lap, especially when you consider that I was carrying a passenger beside me in the form of success ballast,” enthused Turkington. “To be honest the weight hasn’t been much of an issue, our car is so well balanced that I can carry it and put it to the back of my mind. The guys in the eBay Motors team have given me a really good car – it’s getting faster at every race meeting and I’m really enjoying driving it at the moment."

Jason Plato said: “That was the best I could do. We didn’t have the best run-ins for qualifying with the issues this morning which meant that we perhaps hadn’t quite built the perfect rhythm up. That said there’s no more than a tenth left on the table. It’s just the way it is – weight corrected we’re miles off the pace and with the package we’ve got that’s just how it is. With the BMW now 18 months into its development it’s reached the point where their package – weight distribution, longitudinal engine, rear-wheel drive etc makes it a better package. I’m just grumpy I’m not in a rear-wheel drive car – it’s going to be a case of racing for second tomorrow for us. That’s what happens when you get a great driver (Turkington) in a car with an advantage.”

Gordon Shedden said: “That was a cracking lap – when I saw the delta on the way round I had no idea where it came from and I’m still not quite sure! At least it was enough to stick us on row two, but I’m still a little bit disappointed because the car that’s on pole by quite a margin has 45kgs of ballast. You never know what happens in race trim – it’s going to be difficult and I’ll be pushing 100 per cent as always, but on weekends like this it’s especially important to remember that points mean prizes and we’ve got to score a bag full tomorrow again.”

Matt Neal said: “As a team, I’m happy we’ve locked out the second row. For me personally I was a little disappointed, I was hoping for a bit more without any weight on board, so it’s a bit of a double edged sword. It’s definitely a lot better than Oulton where I had an extra digit in my starting position so it’s a step forward. Tomorrow Colin is going to be quick off the line, but we shouldn’t forget that historically the BMWs also take time to get heat into their front tyres. If we can all get into the back of him and give him something to think about then we’ll have a race on our hands. We’re all focusing on Turks, but there’s a few more BMWs and Audis dotted around that we need to keep an eye on too.”