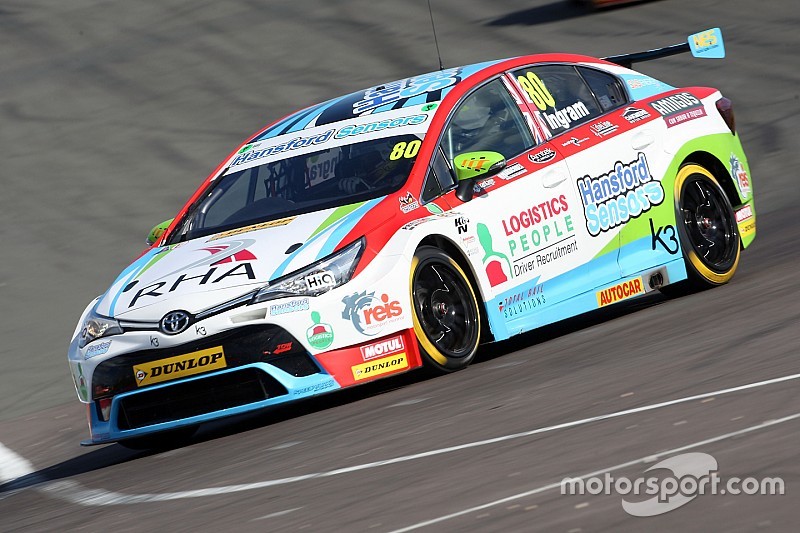 Tom Ingram became the first double winner of BTCC in 2017 after taking the victory in the second race of the weekend at Donington Park.

The Speedworks Motorsport Toyota driver started fifth on the grid but leapt to third on the opening tour as those in front battled, and rose to second place on Lap 2 to chase down race one winner Aiden Moffat (Laser Tools Racing Mercedes).

He made the move for the lead as the cars powered out of Redgate corner on Lap 4 to power clear to a comfortable 3.8s win.

"I really didn't expect to be getting that [win] from fifth on the grid," said Ingram. "We had weight on but the pace of the BMWs had me worried because I knew they would be strong.

"I also knew the situation that Aiden would be in on the hard tyre, so I knew I had to get him early so he wasn't the cork in the bottle.

"I got him early and then I was able to look after my tyres."

As the fully ballasted Moffat dropped down the order, Rob Collard (WSR) consolidated a strong start to claim second place, but he was under pressure in the closing stages as Ash Sutton thrust his Team BMR Subaru from 13th up to the rostrum.

Collard said: "It proves how fast Ash is as a young driver - he was right on me.

"I was trying to control it all, even though he gave me a cheeky tap at Coppice on the last lap.

"But we raced towards a yellow flag period at the last corner and I knew I had enough to claim the place."

Behind Sutton, Josh Cook gave the Maximum Motorsport team its best result in the BTCC by claiming a competitive fourth spot.

BTC Norlin Chevrolet's Dave Newsham came out top of a frantic fight for the lower positions in the top 10.