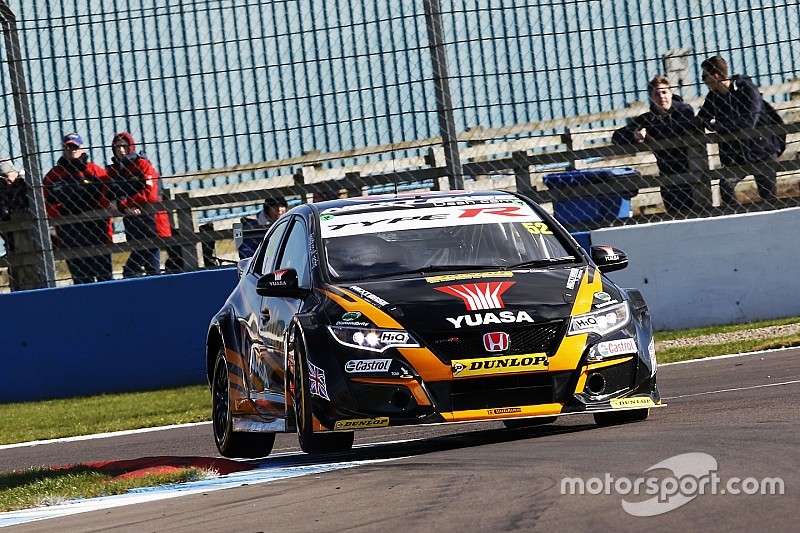 Reigning champion Gordon Shedden won the final race of the Donington Park BTCC race, although the results are still provisional after a post-race ride height scare.

The race was restarted after an initial attempt to get the event underway was red-flagged due several cars skating off the track because of a downpour.

After a brief safety car, fourth-placed Shedden jumped Cook coming out of Hollywood on Lap 3, and then passed Turkington into McLeans later on during that same lap.

Once into second place, Shedden took two corners to pass Newsham, going into the chicane as the cars went on to Lap 4.

Turkington also jumped Newsham later on in the race to secure second place.

“It was a great race to get a win in the wet at Donington for BMW. I was on the limit of grip everywhere, the Craner Curves were a real challenge.”

However, Shedden's victory is not confirmed yet as he is under investigation for an illegal ride height, which the Honda driver claims to be caused by going off track at the original start.

Shedden said afterwards: “It was all kicking off in the first start and I had damage in the rear for going off so the ride height was clearly off because the car was damaged. What can I do?”

Newsham was left to fight with Ash Sutton's Subaru for third place and, just as the latter made a successful overtake, Adam Morgan (Ciceley Racing Mercedes) joined the battle, too.

As the trio fought heartily into the chicane on the last lap, Morgan managed to pass both of them for the final podium spot, while Sutton was fourth ahead of Newsham.

Front-row starter Matt Neal (Team Dynamics Honda) was unable to continue after the red flag as it was deemed he had been given outside assistance to return to the grid.

Warren Johnson to race Grand Am in 2001