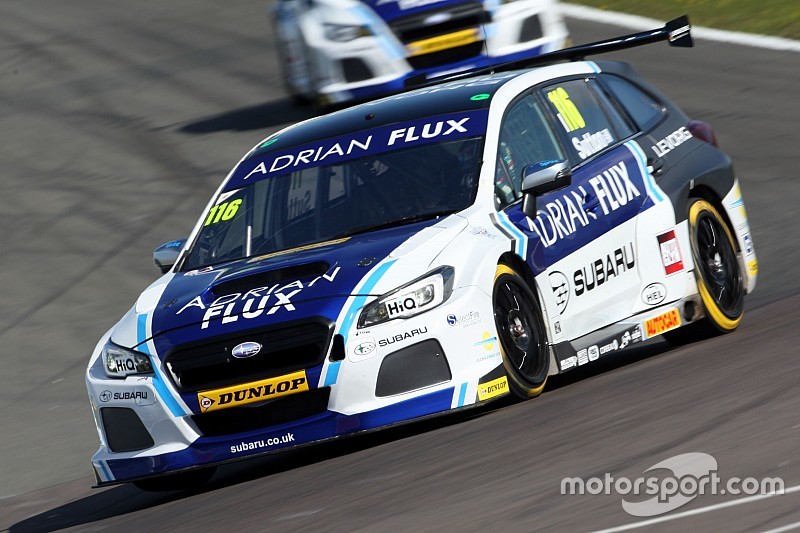 Team BMR Subaru's Ash Sutton took a surprise pole position during the second round of the BTCC at Donington Park.

The 23-year-old, who had a troubled time at the opening meeting at Brands Hatch three weeks ago with a poor-handling car and failed to score a single point, traded honours at the top of the timesheets throughout the session.

He banked the best time after 10 minutes of the 30-minute period but it was scrubbed because of a track limits infringement.

Sutton went out again and set a lap that was 0.3 seconds ahead of the competition almost immediately. That 1m09.412s - a new qualifying lap record - was good enough for the top slot.

"This is a huge credit to the lads at Team BMR who have worked day and night since Brands Hatch to turn the car around," said Sutton.

"We have been chipping away at lots of little things, and the boys are shattered so this one is for them.

"I got pole position here at Donington Park last year [in the factory MG], but couldn't convert it into a win - that has to be the main aim tomorrow."

A late lap from Rob Austin in the Handy Motorsport Toyota means he will line up second on the grid.

"I was putting myself under pressure during that session and I was a bit scrappy early on," said Austin. "I just had to calm it down, and then the time came."

Jack Goff, who had set the fastest time in the free practice sessions, was third in his Eurotech Racing Honda.

He will share the second row with Speedworks Toyota driver Tom Ingram, who was carrying 66kg of success ballast.

Reigning champion Gordon Shedden set the eighth best time in the Team Dynamics Honda, despite carrying 75kg of success ballast, and he was just one place behind teammate Matt Neal.

All of the factory BMW drivers had complained of a lack of balance through the day.

BMW's leading qualifier was Colin Turkington in 12th, even though he had caused a red flag in the session with a water leak with six minutes to go rhat prevented him returning to the track.