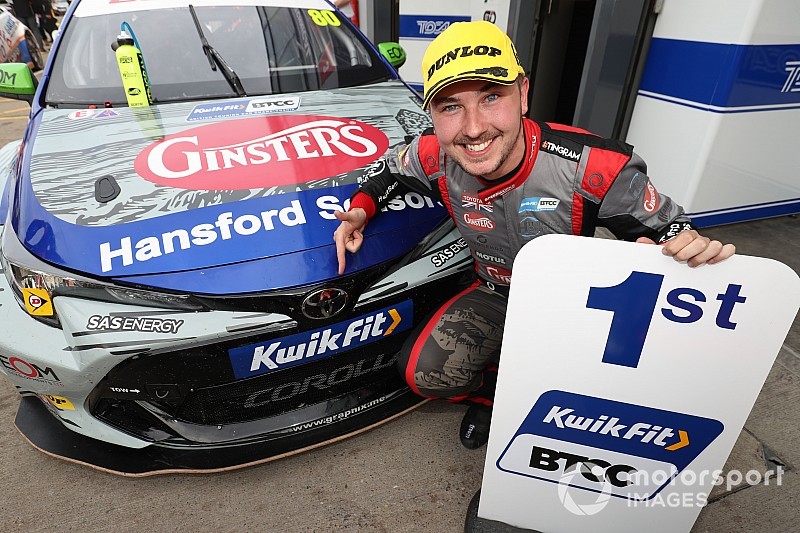 Tom Ingram scored the first BTCC win for the new factory-backed Toyota Corolla in the final race at Donington Park.

Ingram lined up on pole for the partially-reversed grid and, having used the optional hard tyres in race two, was one of only two soft-shod runners in the top 11.

A clean start meant he held his position into Redgate as Rob Collard brought his PMR Vauxhall Astra alongside Jake Hill, but the Audi S3 driver held on and was given respite when multiple incidents behind brought out the safety car.

Team HARD rookies Carl Boardley and Michael Crees touched in their Volkswagen CCs and span across the grass and buried themselves into a tyre wall.

It took six laps for the tyre wall to be repaired, before Ingram went defensive into Turn 1 and kept Hill behind on the restart.

Hill struggled on his tyres, meaning a strong run out of Coppice for Collard drew the Astra alongside and he promptly made his move for second under braking into the chicane.

From there, Ingram stretched a gap to as much as 2.6 seconds before backing off in the closing stages to preserve the win, eventually crossing the line 1.092s ahead of Collard.

Josh Cook recovered well after a race one puncture and race two shunt to convert his third on the grid into the final podium spot in his BTC Racing Honda.

Hill dropped to sixth in the race, beating out Collard’s PMR Vauxhall teammate Jason Plato and an opportunistic Adam Morgan, who rose from 12th on the grid.

Victory in the opening races meant Colin Turkington was carrying the maximum 54kg of success ballast. The West Surrey Racing BMW driver lost out to Morgan in the dying stages but dispatched Tom Chilton's Motorbase Ford for ninth.

That means Turkington sits third in the standings on 65 points, just five off Sutton.

Dan Cammish rounded out the top 10 in the best of the Dynamics Hondas, as teammate Matt Neal, running on the harder type compound, dropped from ninth to 19th.

Jordan out of hospital after "biggest hit" of career