Second half off season set for kick off at Snetterton

The second half of the 2012 Dunlop MSA British Touring cars is set to get under way this weekend at Snetterton, following its lengthy summer break, in what so far has been another season to remember with constant wheel to wheel action right the way through the field.

In recent events like last year it has been the pair of works Honda Yuasa Racing Civics built to the New Generation Touring Car (NGTC) format dominating the series and which so far have taken 10 wins from the 15 races including 7 straight wins in a row.

...few modifications are coming for Snetterton which will be a positive.

Heading into this weekend it is reining champion Matt Neal who leads the championship by just a single point from team mate Gordon Shedden. While many teams have been out testing during the summer break Honda have opted not to test although they have been updating the car/engine. Neal believes that they are in a better position to the one which they ended the Croft event with and said, “just because you have not seen us it doesn’t mean that we have been sitting still. Neil Brown engineering have been fettling the engines and we have worked on the chassis back at base, plus a few modifications are coming for Snetterton which will be a positive. I think we are potentially stronger then when we left Croft in June.”

Despite having not turned a wheel in anger prior to the first event it was Jason Plato in his all new NGTC MG 6 that stole the show at the first meeting of the year taking an early championship lead. However a couple of Mechanical issues prior to the first race at both Croft and Oulton Park, when set to start on pole combined with the incredible run of the Hondas, have seen the former double champion slip to 29 points behind Neal despite winning race 3 at Croft; Plato’s 70th victory in the series.

This season’s break has been particularly important due to how new the car still is and Plato once again believes that his title charge starts now and told Autosport magazine, “we have definitely moved the car on.”

Plato and his MG KX Momentum team recently tested at Brands Hatch over the break and added, “We have had some development parts and we are setting ourselves up for a strong second half of the season, it’s a step forward. You can achieve a lot in one day if you have a target plan and Triple 8 really know how to test. A lot of the work is done away from the track and enables you to think long and hard what you can do differently, how I can get the car to drive differently. It also gives the engineers quality time to look at the data. I think Snetterton will suit us and we are absolutely going there to win.” 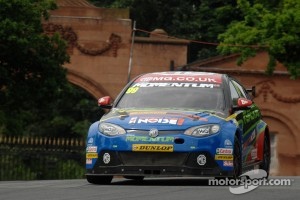 Team mate Andy Neate also showed real promise in the last race at Croft where he led for much of it before being bullied down the field and like Plato believes the MG 6 is now a completely different car to drive and said after the Brands test, “just to see how the car has progressed in the last few months, the team bolted on the set up used for the opening round at Brands used at the start of April when the car was fresh out of the box. Compared to what we have now it felt like a reliant robin!”

At Snetterton something will happen in the series which hasn’t happened for 37 years. That is that an American will join the grid with former front running Pirelli World Challenge series competitor Robb Holland.

Holland will race the S2000 Honda Civic as now run by Tony Gilham for Team HARD. In an exclusive interview for Motorsport.com a few weeks ago Holland admitted that he was “up for it” and said “my main goal is to get experience in the series with the thought of being competitive in an NGTC car next season.” This means that team boss and regular driver Gilham will not be racing in his normal Honda Civic for this weekend but instead has bagged a drive for the returning Thorney Motorsport in their NGTC Vauxhall Insignia.

Gilham will have a busy weekend trying to oversee Holland’s debut in the series whilst driving in the Insignia as his team merge with Thorney Motorsport to try and push the team forward.

Gilham said the decision to run an NGTC car for the first time made sense as this will give him an insight as that’s what he hopes to run in 2013 and said, “John Thorne (who is team boss and regular driver) has a big sponsor lined up for the future and it would be nice to try and help the team get the car closer to the front, whilst it keeps my face on the grid which is good for my sponsors. It will also give me valuable NGTC experience for everyone at Team HARD, as that is the route for us in the future and we hope to have a considerable presence on the grid for next year. I won’t see the Insignia until first practice on the Saturday but I aim to work steadily on the set up and keep chipping away at those lap times.” 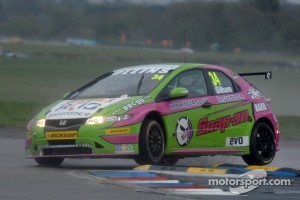 Gilham who already has one podium to his name this season at Donington also admits that it will be a busy weekend and finished off by saying, “it’s obviously going to be very busy switching between driving and overseeing Robb’s debut in the Civic but I have drafted in extra staff for the weekend. It’s important that Robb is properly looked after on his first outing with us and I’m sure he is going to be competitive.

Other drivers to look out for this weekend include Pirtek Racing’s Andrew Jordan and Frank Wrathall in his Dynojet prepared NGTC Toyota Avensis.

Jordan who despite not winning a race this year currently is running 4th in the standings and has a successful test over the summer break testing at Pembrey in Wales, while Wrathall is still looking for his first ever series win and recently competed during the Silverstone Classic event in a Vauxhall Cavalier which competed during the old Super Touring era; perhaps the most successful era of the BTCC.

Finally leading the S2000 charge will be eBay Motors pair Rob Collard and Tom Onslow-Cole in their fast starting rear wheel drive BMW’s and Redstone Racing’s Mat Jackson who has been out testing his Ford Focus with the team feeling that they have made valuable tyre gains.

Jackson however will be without one of his regular team mates for this weekend; Liam Griffin. Last time out Griffin had a massive shunt in his Ford Focus but he will miss the event due to work commitments as he is managing director of London’s largest cab firm Addison Lee which are heavily involved in the Olympics but hopes to be out following that.

Aston Martin heads East for Asian leg of the WEC