Honda still not yet at full potential, warns Neal 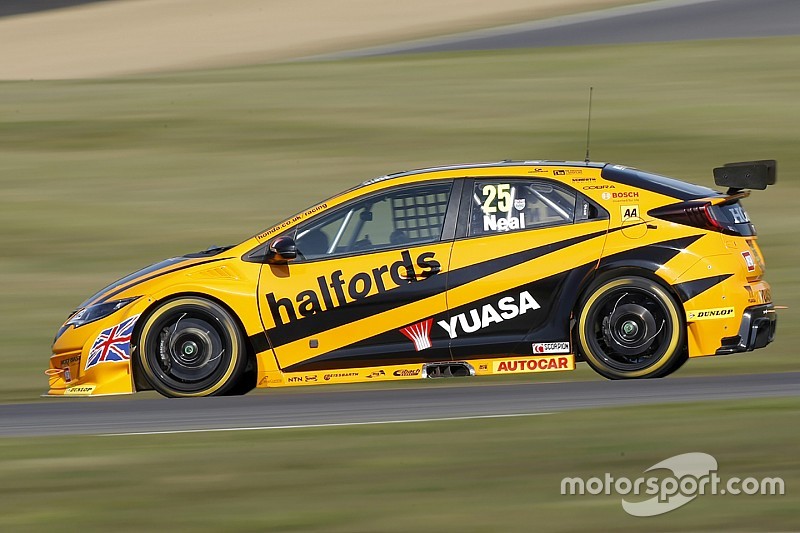 Matt Neal says the Honda BTCC squad has yet to reach its real potential, even though the team's drivers sit atop the championship after the opening round.

Neal leaves the season opener with a five-point lead over teammate Gordon Shedden in the drivers’ championship after enjoying a solid run last weekend at Brands Hatch.

The three-time BTCC champion finished third behind Tom Ingram and Shedden in the opener, before following his teammate home for a 1-2 in the second race after Ingram and Rob Collard came to blows while battling for the lead early on.

Despite carrying 66kgs of weight and using the soft tyre in race three, Neal was able to finish fifth, only just being beaten at the line by Andrew Jordan's Motorbase Ford.

“I was just keeping quiet,” Neal said. “I was just getting on with it and enjoying it. We were lucky with Rob and Tom [colliding] in Race 2, whether we could have had them was under question.

"We were carrying weight; you’ve got to roll the dice and have some go your way. I was more pleased with race three than race two, I was having to run with high weight and the soft tyre, so to finish fifth was great.

"I was pulling more revs at the end of the straight, how does that work?”

Despite the strong performances of the Honda Civic Type-Rs, Neal said there is still a lot of work to do before the cars can reach their full potential.

“We’ve got a few wrinkles to iron out, they’re pretty major things at the minute,” he said. “It’s not a plain sailing ship. We’ve got a lot of work to do before Donington.

Reigning champion Shedden was delighted to get his first win of 2016 at Brands Hatch, leading home teammate Neal already scored second place in the first race.

“It’s almost perfect, isn’t it?” said Shedden. “It could’ve been very different if Ingram and Collard had stayed on the road, they were intent on taking each other out and that worked in my favour!

"Once I got to the front the car felt good. I think we were probably a bit safe in race one, we tweaked it a little bit and she was good, it was almost a little bit better with 66kgs [of ballast] on it - we need to start scratching our heads and find out what’s going on with that one.”

With just three laps to go a patch of fluid began catching a number of drivers out, including some of the front-running cars. However, Shedden said that by that point he wasn’t pushing hard enough for the fluid to cause any real problems.

“There was a slippery surface, but there was also some grass on the apex so I thought it was that,” he continued. “To be honest though three laps from home so I wasn’t pushing hard enough for an issue.”

Plato: "We've got all year" to get Subaru winning