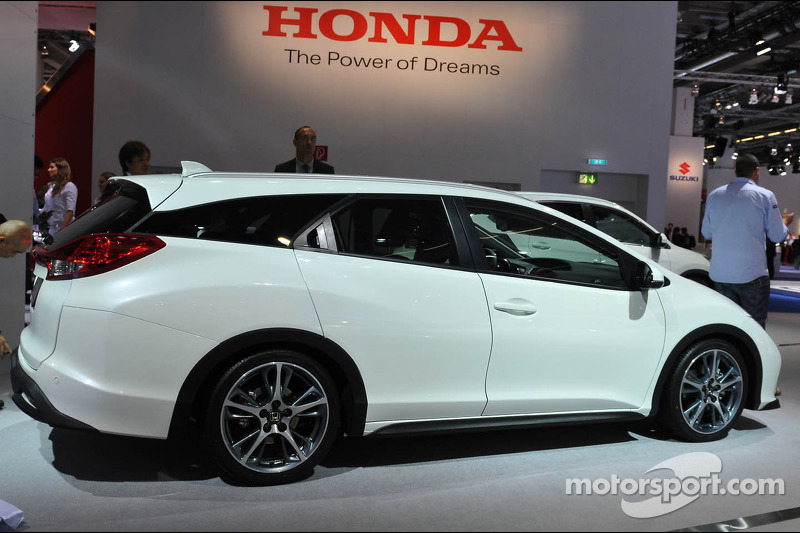 After two seasons racing the Civic hatch, in which it has taking all honours during this time, Honda are no doubt taking a big risk by switching to the Tourer for 2014...

Honda Yuasa Racing have confirmed that they are to take the brave step in replacing their all conquering Honda Civic hatch with their Civic Tourer Estate, to compete in next season’s Dunlop MSA British Touring Car Championship.

After two seasons racing the Civic hatch, in which it has taking all honours during this time, Honda are no doubt taking a big risk by switching to the Tourer for 2014 as they become the first team to run an Estate car in the BTCC, since Volvo ran the unsuccessful 850 Estate for Rickard Rydell and Jan Lammers 20years ago in 1994.

Despite the big risk Team Dynamics, the men behind the Honda project, are without question one of the best in the business at building and designing new cars; their past 3 cars the 2005 BTC spec Honda Integra, 2007 S2000 Civic and 2012NGTC Civic all took victories on their race debuts and all took titles, 2 of them in their first year of racing. 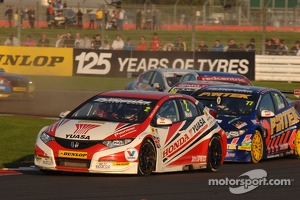 Speaking about the decision to change to the Tourer, Managing Director of Honda UK Phil Crossman said, “We wanted to add a new challenge to the mix and really show what Honda and the team can do. By racing the new Tourer after several years with the Civic hatchback we can really showcase our growing range and demonstrate that the versatility and practicality of a Tourer doesn’t compromise dynamic performance. We are only four months away from the start of the 2014 season and I can’t wait to see the cars out on the track. They’re going to look great and there’s no doubt in my mind that they will win races.”

As well as announcing the new car for 2014, Honda also, unsurprisingly, announced the continued partnership of regular drivers Gordon Shedden and Matt Neal behind the wheel.

After clinching the 2012 BTCC title, Shedden narrowly missed out on retaining his title being defeated by just 7 points at the final event of 2013, a race in which he won in what proved to be his final race in the Civic Hatch.

Despite the disappointment of missing out on the Championship, Shedden is now firmly looking forward to 2014 and is excited by the prospect of running the new Tourer and said, “2013 was an incredibly competitive season in the BTCC with the championship battle going right down to the wire! Of course it was disappointing not to retain the drivers title but we’re looking forward to what I’m sure will be a strong year for the team in 2014 - and more excitingly, with a new car. It might be a Tourer, but it’s still a Civic, the car that has won every championship in BTCC for the last three seasons. I’m really looking forward to the challenge of next season, and to seeing what the Tourer can do on race day.”

Throughout 2013 it had looked as if triple BTCC champion Matt Neal was on course to emulate Andy Rouse’s record of 4 BTCC crowns, until a nightmare event at Rockingham set him back and further issues at Brands Hatch, including a huge qualifying crash meant, 4th was the best Neal could manage as he struggled with a badly broken finger from a martial arts accident.

Despite it being a new car for 2014, much of the front end will remain the same from the Civic Hatch and Neal reckons that the Honda form will continue and said, “We’re all confident that the car can continue the long-standing success of the Civic in the championship and very much looking forward to putting it through its paces. Although we’re racing a new model, the inherent advantages of the Civic hatchback from the past two years remain so there’s no reason why this car can’t be a winner straight out of the box! We’ll be testing the car early in the New Year and I can’t wait to see it on track.”

Honda/Team Dynamics have been working on the car for some time now as Team Manager Peter Crolla explains as well as putting a time frame on when testing for the new car will begin and said, “After two competitive seasons in the BTCC with the hatchback, it will be an interesting challenge to ensure the Tourer keeps Matt, Flash and the team at the head of the championships throughout next season. We’ve worked hard over the past few months to develop the first car which will be completed as we head towards the New Year, with the first run scheduled for early January.”

Although Honda Yuasa Racing will switch from the Civic Hatch, we will continue to see the car run by 2013 BTCC champion Andrew Jordan and his Pirtek Racing team. For 2014 Jordan will have a new mate after Jeff Smith, team mate to Jordan for the past 3 years, has decided to call time on driving within the BTCC.

Jordan tweeted “Heading to Donington Park 2moro to give my new team mate a hand with his first test.” The man then spotted behind the wheel of the Pirtek Racing Civic was Martin Depper.

Depper previously competed in the series in 2010 at the wheel of a Forster Motorsport BMW and last year was runner up in the VW Cup GB. No news has been made officially by the team however Depper himself has confirmed that the deal has been completed and that further testing will commence in the New Year.

In other recent BTCC news Clio racer Simon Belcher has realised his dream to race in the BTCC after purchasing a Toyota Avensis previously used by Speedworks for Ollie Jackson in 2013. Belcher will run the car under his current Handy Motorsport team, but will receive technical assistance from Speedworks, with the car set to be unveiled in its new black and yellow Karcher sponsored livery at the Autosport Show in January.

Staying with Toyota news, leading British GT team United Autosports have acquired Frank Wrathall’s/Dynojet’s Toyota Avensis as they hope to enter next year’s championship. Team boss Richard Dean has stated that he is hoping to get two cars before looking to build their own cars in the future.

The newly purchased car was put through its paces by James Cole, who drove for Team Hard in the first half of the season in one of their Vauxhall Insignia’s with the former Formula Ford driver being contention for one of the seats, although for now the team’s main priority is to gain a TBL Licence from TOCA which is a requirement in order to compete as of the 2014 campaign due to an increased interest in joining the series which gives priority to existing teams from the 2013.

The BTCC‘s youngest ever competitor, Aiden Moffat, is also shaping up for his first full season in the BTCC after buying Andy Neate’s IP Tech Engineering Team Club 44 Chevrolet Cruze. Moffat became the series youngest ever competitor at Knockhill driving an S2000 Cruze before ending the season at Team Hard driving a VW Passat and is now set to run the Cruze under his own team name for 2014, again providing they receive TOCA’s new licence.

Oly Collins: "We learnt more this year than any other"