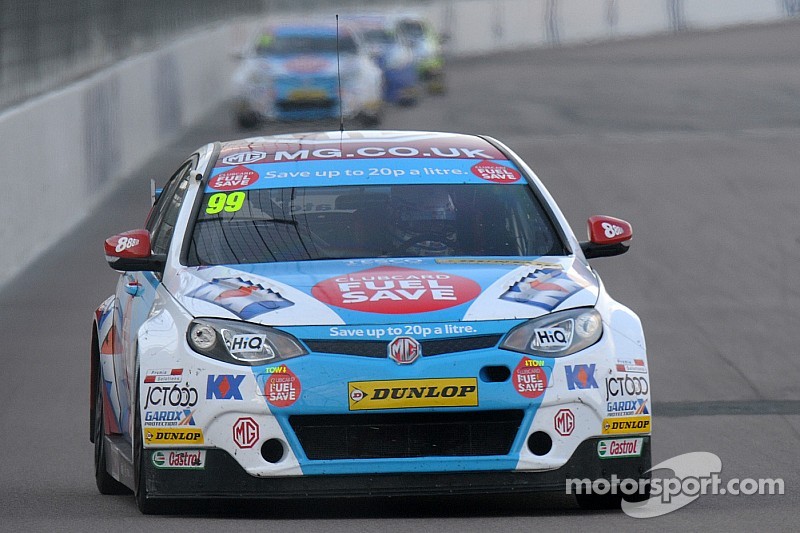 Jason Plato claimed the penultimate pole position of the 2014 Dunlop MSA British Touring Car Championship after producing an early flying lap that would not be beaten for the remainder of today's qualifying session at Silverstone (27 September).

It is the third consecutive year that the MG KX Clubcard Fuel Save star has secured top spot at his home circuit, although his session today had initially got off to a stuttering start when he slid wildly through Luffield. The double champion recovered to complete a clear lap at the end of his maiden run where he set a 58.511s benchmark.

Still nearly three tenths off his own 2013 qualifying lap record times looked set to tumble later in the session, but unusually high track temperatures on a beautiful day in Northamptonshire seemed to put paid to any further improvements at the head of the field.

Second or third doesn’t matter to me – Colin on the other hand, if he gets involved with me, has a lot to lose, so I think he’ll go to bed with that in his mind.

Championship leader Colin Turkington was critically able to negate the deficit to his nearest challenger by setting the second fastest time in his eBay Motors BMW, whilst Plato’s team-mate Sam Tordoff ended up just 0.003s further behind in third. The young MG driver was targeting his third pole position in a row after recent successes at Knockhill and Rockingham but the Yorkshireman had to settle for a starting berth on the inside of row two at the home of British motor sport.

Airwaves Racing’s Mat Jackson has a stellar record at Silverstone, having taken four BTCC wins at the circuit, and the 2008 championship runner-up will be a contender tomorrow after hauling his Ford Focus onto the second row.

Team BMR will occupy row three with Aron Smith again getting the better of his double champion team-mate Alain Menu. With an impressive top speed the VWs look set to benefit from Silverstone’s long straights on race day. Warren Scott and Jack Goff completed the BMR quartet's positions in 13th and 14th respectively.

I’ll be focusing on who is racing around me, I just need to manage where I am on the track and try not to worry too much about the others.

WIX Racing’s Adam Morgan and the Exocet Racing Audi of Rob Austin ran in tandem in the closing stages of the session and the duo seemed to spur each other on to claim positions in the top ten.

eBay Motors’ Rob Collard just edged out Crabbie’s Racing’s rookie Jack Clarke for 11th. Surrey-based Clarke was as high as ninth at one stage before eventually having to settle for a hugely impressive 12th – the best of his short BTCC career so far. Clarke’s illustrious Motorbase stablemate Fabrizio Giovanardi could only manage 19th.

The Italian wasn’t the only former champion to struggle, however, with the Pirtek Racing Honda of Andrew Jordan and the Honda Yuasa Racing cars of Gordon Shedden and Matt Neal immediately ahead of him in 16th, 17th and 18th respectively. The title winning quartet will be staring at the rear bumper of Aiden Moffat’s Chevrolet Cruze for the opening race. The teenager – who is 18 tomorrow – produced his best ever qualifying result with 15th.

Such was the competitive nature of the session that the top 23 cars were separated by less than a second, which will have been little comfort for Dave Newsham whose session ended abruptly after he lost control of his AmD Ford Focus. The Inverness-based driver made contact with the barrier after spinning on cold tyres during his out lap and despite frantic efforts by his team they were unable to get the BTCC race winner back on track before the end of the session.

Jason Plato said: "The MG has always gone well around here and I managed to get everything just about perfect to get into the 58.5s. It’s a great result for me at my home track – I’ve got a lot of friends and family here. Our race pace was good last year – we’re not sure how fast Turkington will be, but if I can get onto him it gives him quite an interesting choice about how to race. Second or third doesn’t matter to me – Colin on the other hand, if he gets involved with me, has a lot to lose, so I think he’ll go to bed with that in his mind. It’s going to be interesting to find out how he wants to do it – I hope he wants to come and play!"

Colin Turkington said: "I didn’t know what to expect today to be fair – I qualified fourth last year when the car was more difficult so I was hopeful that we’d be at the sharp end. I didn’t think we’d be as close to Jason though – I got a clean lap in on a clear track, all the elements came together which is important with so many cars on the grid. I’m pleased to be racing against my direct competition, it’s what I wanted to do. It’s hard to know how the races will pan out. I don’t think we’ll be able to pull a gap because the track doesn’t play to the strengths of our car so breaking the tow will be hard. I’ll be focusing on who is racing around me, I just need to manage where I am on the track and try not to worry too much about the others."

Sam Tordoff said: "We’re up at the sharp end so we’ve given ourselves a good chance. With the two guys at the front carrying the two highest ballast weights hopefully it will play into my hands tomorrow. I want to win races – obviously we’ve got the manufacturers' championship to think about but with the Hondas having qualified further back we should increase the gap this weekend. Both myself and Jason need to finish on the podium if we can – we’re not sure how Colin’s race pace is going to be but ours is looking good. We expected the Fords and the VWs to be quick, but we can only look after ourselves and see what happens!"

Mat Jackson said: "That was good – the car is doing exactly what I want and I’m comfortable behind the wheel. There’s some quick guys around us and it’s incredibly close, so we’re in a good spot in P4. Some of the drivers around us will be driving mindful of how much they have got to lose in the championship – especially Colin – but it means they aren’t going to do anything unpredictable or make mistakes. The guys at Airwaves Racing have done a great job and given me a strong car, so hopefully I can move forward in the races tomorrow."

Aron Smith said: "The VW is flying – we’ve got the base set-up now so we can play around with it every weekend and extract the best performance. We knew we’d be strong here, the track suits the car. Fifth is a great result – it matches my best of the year so it’s good to have a return to form after a difficult couple of weekends. It’s great to have Alain up there too – we can work together now and I think we’ll have a good shot at it tomorrow. This hopefully will be our race day – when you’re at the front everyone drives cleanly so I’m really looking forward to it. I need to get another win in race one or two if only to stop my girlfriend saying I’m no good!"