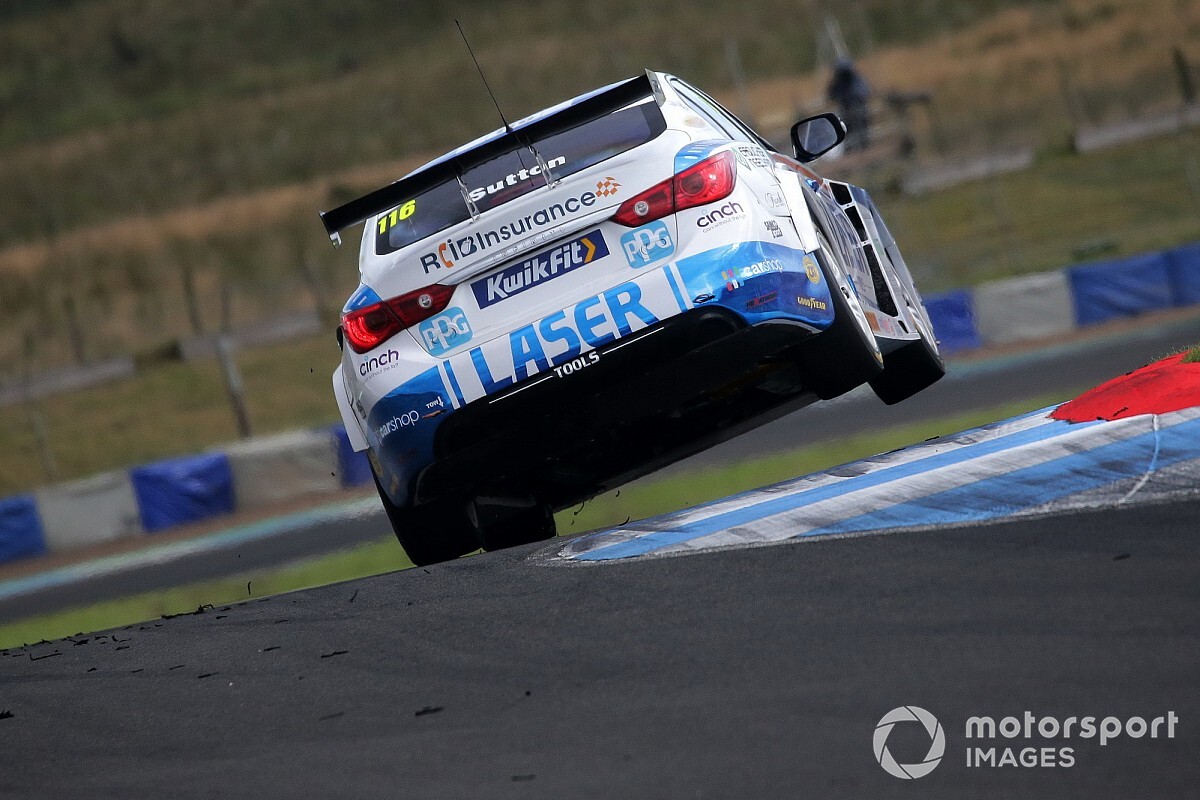 Ash Sutton made it two out of two at Knockhill in the second race of the British Touring Car Championship’s trip to Scotland.

Once again it was championship leader Colin Turkington pressuring Sutton all the way but, as in race one, the Laser Tools Racing Infiniti Q50 remained in front until the chequered flag.

Turkington drew his West Surrey Racing-run BMW 330i M Sport alongside Turkington on the run to Duffus Dip after the start, but Sutton had the inside line and claimed the advantage.

The race immediately went under the safety car, and on the restart Tom Ingram latched onto the leading duo at the wheel of his Speedworks Motorsport-run Toyota Corolla. Ingram, in turn, began to come under pressure from the works Honda Civic Type R of Dan Cammish, and had to turn his attention to defending from the Team Dynamics machine.

Another safety-car interlude led to an 11-lap dash to the finish, and once again Turkington provided a stern test to Sutton’s leadership.

An error from Turkington with five laps remaining allowed Sutton to extend a 0.942-seconds margin, and he eventually backed it off slightly on the final lap to take his fourth victory of the season by 0.662s and erode Turkington’s points lead to eight.

“I’m over the moon with that – I think I can stand here and say that’s the best touring car I’ve ever driven,” said Sutton. “My biggest concern was off the line, and after that it was a case of managing Colin from there.

“He was constantly there – I was always having to look in the mirrors, but he made a slight error and that gave me a margin to relax and bring it home.”

Ingram fell away to hold on to third from Cammish, who had moved up to fourth place on lap five thanks to an incident in front between Jake Hill and Rory Butcher.

Butcher, driving the Motorbase Performance Ford Focus, tried to bully a gap inside Hill’s AmD-run MB Motorsport Honda into McIntyre’s, and this resulted in Hill not only running wide but Butcher going wider still through the gravel. First-race podium finisher Hill was clearly struggling with 48kg of success ballast on board the old-spec FK2 Civic, and it was the second works Honda of Matt Neal that came through to fifth on the road.

But Neal had copped a 10-second time penalty for a false start, and the double safety car compounded this, dropping him to a corrected position of 15th.

Aiden Moffat therefore claimed fifth, providing further proof of the strength of the LTR Infiniti package as he beat the second BMW of Tom Oliphant, while the BTC Racing Honda of Tom Chilton beat Hill to seventh. Chris Smiley, in the lead Excelr8 Motorsport Hyundai, headed the recovering Butcher in ninth.

With Sutton pulling the number 11 in the reversed-grid draw, that puts the second Excelr8 Hyundai of Senna Proctor on pole for the finale.

The BTC Honda team worked miracles to rebuild Josh Cook’s Civic following his hefty shunt in race one, only for Cook to be pitched off at McIntyre’s on lap one and out of the race, causing the first safety car.