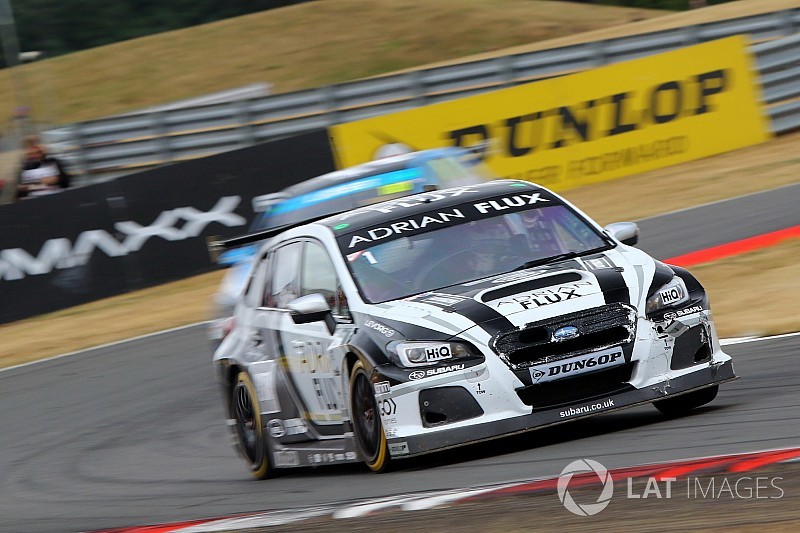 Reigning champion Ash Sutton took his fifth victory of the British Touring Car Championship season on a soaking track in race one at Knockhill.

The Team BMR Subaru Levorg driver powered up from eighth on the grid to hit the front on lap 12.

He survived a late-race scare with a safety car which closed the field up to once again put the hammer down and he finished 1.2s ahead of BMW rival Colin Turkington.

“That was a great race,” said Sutton. “We need results like that. The conditions were hard, particularly on the new tarmac which they have laid here and we were all on a journey to find out where the grip was.

"The car was just superb though and I could almost put it where I wanted to.”

Turkington, who was third on lap one, was embroiled in a fierce battle with front-row starter Stephen Jelley (Team Parker Racing BMW 125i M Sport), the duo swapping places on a couple of occasions.

However, the pair collided on lap 19 under braking for Clark’s. Turkington slid into the back of Jelley’s car and the Team Parker Racing entrant was fired into the gravel and into retirement. The incident is currently under investigation.

“To go from P4 on the grid to P2 is great progress, and I didn’t expect a podium with 75kg of success ballast on board,” said the Northern Irishman, who maintained his points lead in the title chase. “We have really made the most out of the car.

“I feel sorry for Stephen, and we had been having a great scrap. He made a small slip coming out of the chicane and we both went to the inside of the track going into Clark’s.

"He hit the brakes and I had nowhere to go and we touched. I will go and apologise to him straight away – there was certainly no malice in it.”

Cammish had started from his maiden BTCC career pole position in the Team Dynamics-run Honda Civic Type R but was powerless to resist the progress of the rear-wheel-drive cars.

Once Sutton was through, he dropped back into the clutches of the battle between Jelley and Turkington who pushed him back to fourth spot.

He profited from the Turkington-Jelley incident to secure his podium finish. Referring to the rear-wheel-drive cars all around him, Cammish said: “I think I brought a knife to a gun fight today.

“I was pleased to lead into the first corner, but I knew they would be coming for me. When I saw it was Ash behind me, I knew my days were numbered. Nevertheless it is a mega result.”

Andrew Jordan, who had started in third place, brought his WSR BMW 125i M Sport home in fourth spot, but was under pressure in the latter stages.

Sutton has closed in on the series lead with his victory. He is third in the standings, 27 points behind leader Turkington. Ingram is second in the table, 11 points off the summit.