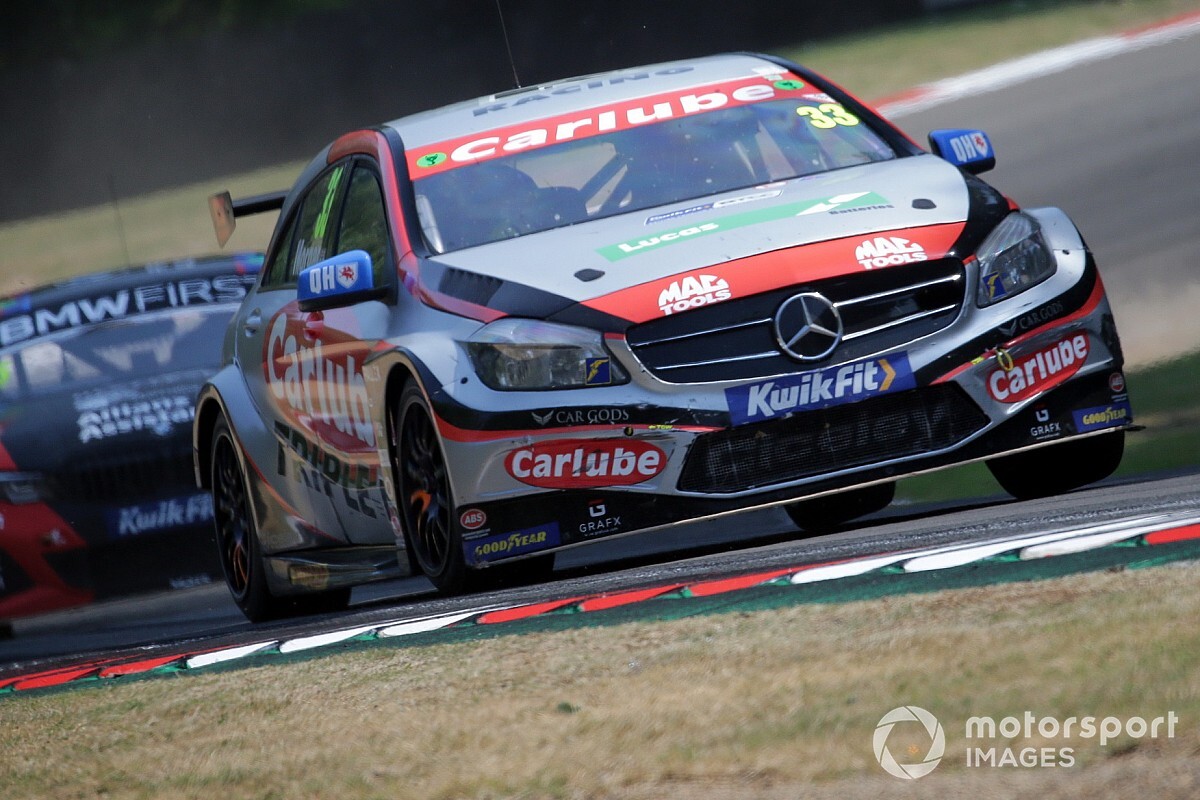 Mercedes stalwart Adam Morgan took honours in a British Touring Car Championship finale at Oulton Park that was just coming to the boil for a thrilling finish when it was red-flagged with four laps remaining.

Morgan had led all the way from second on the reversed grid, but the Ciceley Motorsport driver had the two BMWs of Colin Turkington and Tom Oliphant plus the Infiniti of Ash Sutton right on his tail when the race was halted and not restarted.

Stephen Jelley, running 20th in the Team Parker Racing BMW, crashed at Druids and, as his car slewed across the track, he was collected heavily by the Team Hard Volkswagen of Nicolas Hamilton, who struck the barriers, with Hamilton’s team-mate Ollie Brown also sustaining damage in the incident. The drivers all emerged from their wrecks and appeared to have sustained no serious injuries.

Morgan’s good getaway gave him an early lead from Oliphant and the BTC Racing Honda Civic of Tom Chilton, while reversed-grid poleman Bobby Thompson’s Audi immediately dived down the order. On the third lap, Turkington managed to chisel a gap down the inside of Chilton into the Hislop’s chicane.

As the two cars rubbed bodywork, second-race winner Ash Sutton was also able to dart his Laser Tools Racing Infiniti ahead of Chilton and into fourth. Together, Turkington and Sutton homed in on the leading duo of Morgan and Oliphant, but Morgan was placung the Mercedes perfectly to prevent himself being vulnerable to attack.

Oliphant switched on his indicators on the seventh lap to signal to West Surrey Racing team-mate Turkington that he was letting him through to have a go at Morgan, and the plan was for Turkington to give back the position if he failed to get ahead of the leader.

With four laps to go, it seemed as though Morgan was going to have his work cut out to stay in front, only for the truncated finish to not only allow Morgan to take his first BTCC win since August 2018, but also frustrated Oliphant, as Turkington could not hand second place back.

“It’s very difficult having Colin behind you for that many laps,” said an emotional Morgan. “You realise the strengths of front-wheel drive and rear-wheel drive, and I knew Colin would be quick at the last corner and at the hairpin, so my aim was to get it stopped [into those corners] and drive away.”

Chilton finished fifth, but was coming under severe pressure from the Excelr8 Motorsport Hyundai i30 of Senna Proctor when the red flag appeared.

Jake Hill, who felt he had a misfire in his MB Motorsport Honda in race two, took seventh, while opening-race winner Rory Butcher (Motorbase Performance Ford Focus) managed to get the better of a great battle with Chris Smiley’s Hyundai for eighth. Aiden Moffat completed the top 10 in the second LTR Infiniti.

Tom Ingram was a logical favourite for honours in his Speedworks Motorsport Toyota Corolla from the third row, but driveshaft failure forced him out on the green-flag lap, while Dan Cammish twice went wide on the opening lap and struggled home 15th in his Team Dynamics Honda.