Honda Yuasa Racing’s Matt Neal leads the Dunlop MSA British Touring Car Championship as the series visits the Ovals of Rockingham; Britain’s only purpose built race track for rounds 22, 23 and 24 of the championship.

Despite a below par performance at Knockhill where he managed just a single third place, Neal heads into this weekend with a 10 point lead in the Championship thanks to the misfortune of his main rivals. His Honda Racing team mate Gordon Shedden had led into the final race at Knockhill but a trip across the grass, in avoidance to a spinning car, put an end to his day and left him adrift of his team mate.

Suffering an even worse day than the Hondas was Jason Plato in the Triple 8 prepared MG. It all looked to be going Plato’s way following qualifying on pole but, after losing the lead into the first corner, his race ended in the gravel on lap 2 as he was involved in a controversial collision. The double champion then ended up a lonely 11th after a turbo boost problem in race 2 while the same problem caused him to miss race 3 all together.

The target is simple – we have to win and win we will!

Plato now heads into this weekend a massive 36 points behind championship leader Neal. One thing Plato does have in his favour is he’s carrying less ballast than the two Hondas, while he also has a fantastic record at Rockingham winning there every year since 2009. For this weekend Plato is under no illusions about what he has to do if he is to get back in the championship hunt and said, “I can’t wait to get back in the groove at Rockingham. We had awful luck in Scotland. Rockingham is such an important event for us. My championship hopes hang on strong results here. The target is simple – we have to win and win we will!”

While all eyes are on the main championship battle there is also quite a tussle going on for the Independents Championship with Pirtek Racing’s Andrew Jordan leading the eBay Motors BMW of Rob Collard.

Collard took two outright wins last time out at Knockhill to take 14 points out of Jordan, however with Plato’s problems Jordan sits just 4 points adrift of the MG. Speaking about both championship battles Jordan said, “I’m hoping I can pull out more of a lead over Collard at Rockingham because I am expecting to get slaughtered at Silverstone a fortnight later. Collard took quite a bit out of me at Knockhill – 14 points in all – but, considering it was a bad weekend for us, then it perhaps wasn’t too bad. I think we will be a bit stronger at Rockingham.” 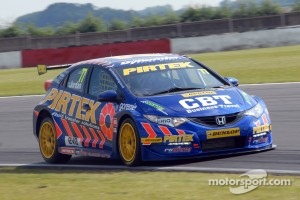 Added Jordan, “It is starting to get a bit tight. Our pace generally reflects that of the factory Hondas wherever we go so it’s going to be hard to make serious inroads on them now. Jason has to hope the MG will have the upper hand over the Hondas in the final three events and then has to really make it count – it’s all or nothing for him. I’m sure Rob has his eye on third place as well. It’s getting to that stage in the season when things start to get a bit tense…”

Following his two race wins, Collard heads into the weekend full of confidence but admits that although wins are still achievable the Independent trophies will be his main priority and said, “The changes we’ve been making to the BMW throughout the season are really paying dividends now. We really want the two independent titles – they are our realistic hope of winning some silverware now. If I can finish the remaining nine races in the points and enjoy the same excellent reliability that I had in the first half of the season then maybe, just maybe, a top-three finish in the outright championship could still be on. I know Andrew wants that as well but I think the best bet for both of us is if Matt (Neal), Gordon (Shedden) and Jason (Plato) start fighting and leave an opening…”

Sadly this weekend we will be without a few drivers with Liam Griffin continuing to sit out, due to his Motorbase Performance team continuing to focus on his team mate Mat Jackson’s NGTC Ford Focus following Griffin’s huge crash at Croft. Other drivers to miss out are Lea Wood in his Binz Racing Vectra and Dan Welch in his Proton Persona.

A team statement for Wood said, “Unfortunately Lea Wood will be missing this weekend’s eighth round of the 2012 BTCC at Rockingham. The team will be returning shortly with a substantial new package under the BINZ Racing banner. We look forward to continued track success and development when the team returns at Silverstone.” Welch admitted that budget will prevent him racing this weekend but will be back for the final two meetings of the season. 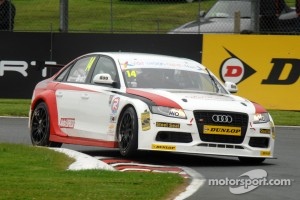 In more positive news Rob Austin Racing has announced that they will be back with a pair of Audi A4’s for Rob Austin and Will Bratt, with AmD tuning.com also returning in their VW Golf after missing Knockhill.

Last season the Golf performed well at Rockingham although didn’t get the points they deserved followed a first lap collision, but after missing Knockhill to test instead, the team now head into the weekend full of confidence with team boss Shaun Hollamby saying, “We discovered that we really need to run the car stiffer than we had been doing and, when we made that change, it improved the handling and the grip. I’m looking forward to seeing what impact the changes have this weekend as Rockingham is a circuit where we have gone well in the past, especially last year where we qualified tenth fastest just seven tenths of a second away from pole position. We also have some new personnel on board for the final three rounds of the year which has given us a fresh viewpoint on some things and we are optimistic about the remainder of the season.”

Another driver to look out for at Rockingham will be young Howard Fuller, who will make his debut in Tony Gilham’s Team HARD squad in the S2000 Honda Civic that American Robb Holland has driven for the previous two meetings. Fuller has already raced and won for Gilham in the VW Cup, has already had his first taste of the Civic at Brands Hatch and admits he can’t wait to race in the series and said, “I’m seriously excited about this weekend. There are some huge names on the grid and it’s going to be fantastic being on the same grid as them. It really is the big time even though for now it’s just a one-off.”

Aston Martin heads East for Asian leg of the WEC