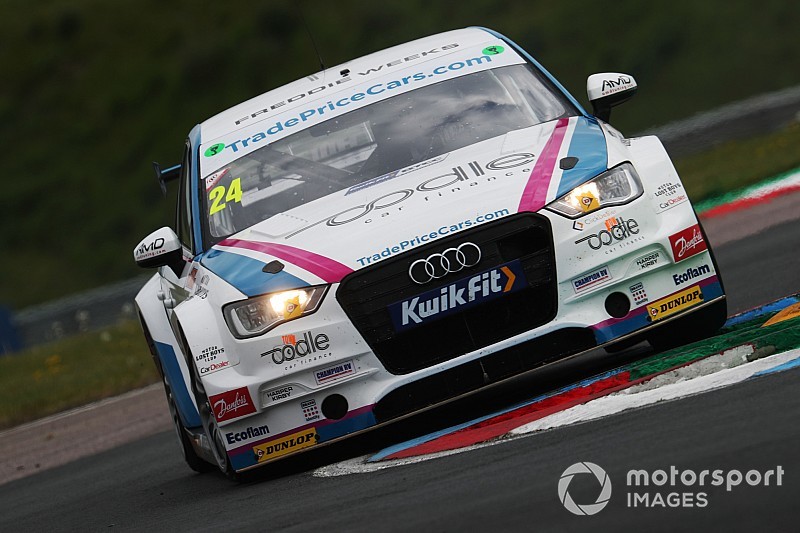 Jake Hill took a controversial first ever BTCC win after the polesitter made contact with brief leader Matt Neal in the Oulton Park finale.

The Audi driver was drawn first for the partially reversed race three grid but was forced to defend from Neal immediately as the Team Dynamics driver made the superior getaway.

As Hill closed off the attack, it compromised Neal’s line and so he then had to turn his attention to third-starting Jason Plato.

But Neal maintained the place as Hill edged ahead by three tenths at the end of the opening lap.

The three-time champion aborted a couple of lunges on Hill, but then out dragged the Audi across the line.

Neal momentarily had first place at the apex of the first corner but as he moved his Honda across the track and back on to the racing line Hill appeared to nudge the back of his car.

That sent Neal into a spin and tumbling down the order, with Plato and Tom Ingram caught up in the incident as well.

Plato was able to rejoin but the damage to his Vauxhall caused it to lay down a film of oil on the way to Island Bend, which sent several drivers spearing off on to the grass.

Up front, Hill was left with a shock 5.982s lead over Rory Butcher who had moved up from fifth on the grid in the melee.

Butcher banged in a run of fastest laps to tear at Hill’s lead – up to 0.9s faster than Hill each tour – and he dragged himself on to the back of the Audi.

It looked set for the two AmD Tuning cars to battle it out for the win, but Butcher was caught out on the oil on the run into the hairpin as he closed on to Hill's bumper.

He out braked himself and ran straight on and across the grass, which dropped him down to sixth place.

That left Hill to run onto the spoils almost a second clear of a fortunate Stephen Jelley in the BMW.

Tom Oliphant was the highest placed WSR driver, taking his second BTCC podium this season in the 330i M Sport.

Butcher’s teammate Sam Tordoff climbed to fourth in the drama as Andrew Jordan rounded out the top five.

Behind a recovering Butcher, Josh Cook scored seventh place as Ashley Sutton and race one and two winner Colin Turkington scrapped for eighth and ninth.

It was Sutton who claimed that scalp, as Turkington’s nudge on Josh Cook through Druids forced the BMW driver off line where Sutton moved by.

Aidan Moffat closed of the top 10 ahead of fellow Mercedes driver Adam Morgan and an infuriated Neal.