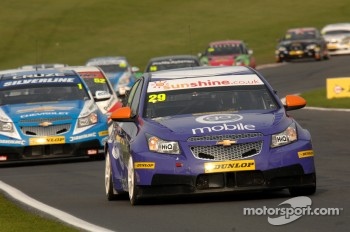 Online travel firm sunshine.co.uk enjoyed a successful start to its continued involvement in the Dunlop MSA British Touring Car Championship after Paul O’Neill clinched a podium finish in the opening rounds of the new season at Brands Hatch.

The Fleet-based company has continued its backing for Widnes-racer O’Neill and his Tech-Speed team for the 2011 season after purchasing the Chevrolet Cruze that carried Jason Plato to the championship title last year.

The Brands Hatch weekend marked Paul’s first outing in the Chevrolet and an impressive weekend on track saw him come away from the opening rounds with points in all three races.

From ninth on the grid after qualifying, Paul took a solid seventh place in race one and followed it up with fifth in race two. However, it was the final race of the weekend where Paul really shone as he fought hard against the turbo-powered cars on the grid to secure his first podium finish of the season in third.

Sixth overall after the opening three races of the year, Paul is only ten points off the Independents’ championship lead having finished inside the top four amongst the Independent drivers in each of the Brands Hatch races.

“As I’ve always said, if you take away one part of the package, things don’t fit together properly and sunshine.co.uk have given us something to work with as a team,” he said. “This weekend, all the boys at Tech-Speed have shown that this is a package that we can really produce the goods with.

“The camera may be pointing at me on the track, but there are a lot of people behind the scenes who make this all happen. It was encouraging to see the pace we had in the car compared to Jason Plato and the works RML team and it’s a great result for everyone involved in the programme to start with a podium.”

Sunshine.co.uk MD Chris Brown was thrilled to see the car he owns finish the race weekend with a podium finish as Paul launched his Independents’ title campaign in fine style.

“What a great start to the season,” he said. “We’re thrilled to see Paul on the podium again and the guys at Tech-Speed have shown everyone in the paddock what they can do with the Chevrolet and there is still more to come. I think they’ve shown that Tech-Speed and the Chevrolet Cruze will be a strong package throughout the season.”