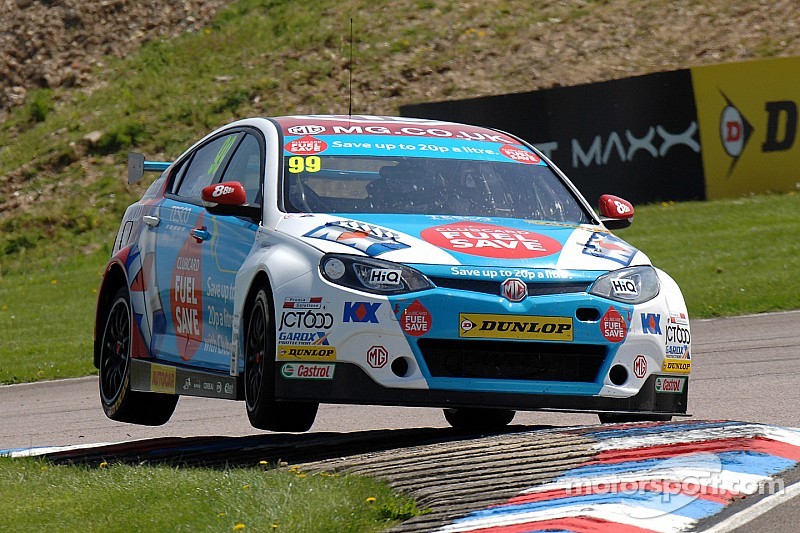 Can Plato complete the sweep?

Jason Plato has scored his second Dunlop MSA British Touring Car Championship win of the day at Snetterton after getting the better of Colin Turkington in a race-long battle.

The eBay Motors BMW of Turkington soared into the lead as the 31 flame-spitting tin tops approached Riches for the first time as Plato tucked his MG6 in behind the championship leader.

The race was neutralised shortly after as Alain Menu’s VW was fired off into the barrier at the exit of turn one, bringing out the safety car. Fabrizio Giovanardi and Andrew Jordan has already continued with their respective progress towards the front by that point, both finding themselves inside the top ten at the restart.

Colin (Turkington) is a fair and world-class driver

Plato on late-race battle for the win with Turkington

Such delight was short lived for reigning supremo Jordan, however, as he sized up a battle between the BMW of Rob Collard and VW of Jack Goff ahead of him. The duo had already touched earlier in the lap and when two became three on the run through Brundle, something had to give. Unfortunately for Jordan it was his car on the outside of the turn that was forced off the track and into a spin. He later recovered to finish 15th but has since been ruled out of race three by the BTCC medical team (see separate story).

Further incident followed down the order as Jack Clarke’s Ford Focus jinked left to miss Martin Depper’s Pirtek Honda scything down his inside, but in doing so Clarke made contact with Warren Scott’s VW. Rob Holland’s Audi also went off in a separate incident.

Meanwhile up front and Shedden had made his way by Adam Morgan’s Mercedes before all three podium positions changed on the same lap. Plato slipped down the inside of Turkington at Montreal and Shedden was seemingly let through by his ballast laden team-mate Matt Neal at the same corner. Turkington kept Plato honest throughout – often less than half a second behind the MG – but the king of Snetterton held on to complete his double.

“I really enjoyed that race and we are really pleased with the results,” said Plato. “It was a good move on Colin at the hairpin [Montreal Corner]. I had a really good sector three going into the overtaking lap and I knew if I could get my nose up the inside I could go for that gap. Colin is a fair and world-class driver and I think he didn’t want to clatter with me as he was thinking about the points and championship. I was hoping for number six to be drawn for the reverse grid but we will just go for it in the final race.”

Shedden limited the damage in the championship race by completing the rostrum behind Turkington. “The start from seventh to third was a great result for race two,” beamed the Scotsman. “The Civic Tourer was fantastic without ballast as I could really drive the car rather than have to wait for results to come to me. My team-mate [Matt Neal] really helped me with the slipstream as the tow is so important around Snetterton and with that we could pass him in an attempt to get closer to the front two.”

An eye-catching scrap between the two Airwaves Racing cars followed the top five with Mat Jackson holding off his fired up Italian team-mate Giovanardi. The double BTCC champ has made solid progress throughout the day having started race one from the back of the grid – his reward is a front row start for the reverse grid finale.

Pole position in race three goes to Aron Smith who finished eighth, after he edged out the two MGs of Sam Tordoff and Marc Hynes.