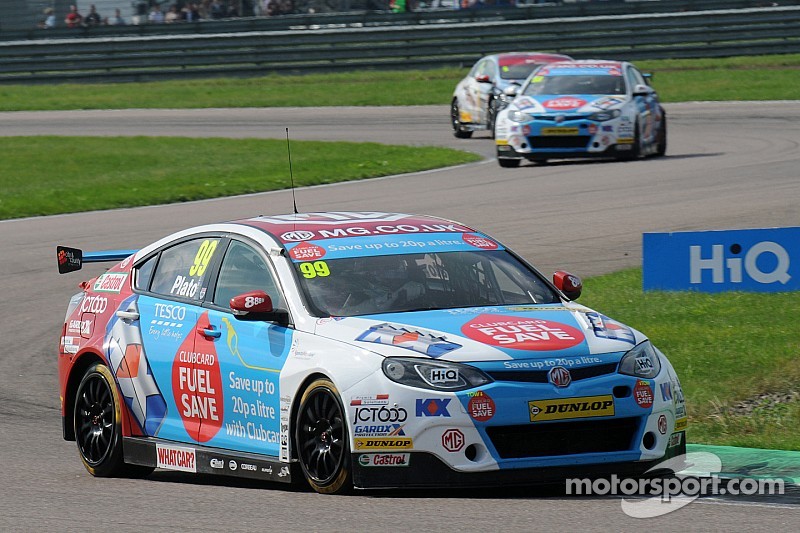 The home of British motor sport never fails to produce incredible racing, and a crowd of over 30,000 fans descended on the Northamptonshire venue to see the best tin-top drivers in the country battle it out around the National circuit.

For both wins Plato had to get past current championship leader Colin Turkington, making late dives down the inside at Brooklands corner on both occasions to steal some valuable points back from the eBay Motors BMW driver.

Airwaves Racing’s Mat Jackson completed the podium in the opening race, having jumped fellow second row starter Sam Tordoff off the line. MG’s Tordoff had to fend off the Chrome Edition Restart Racing duo of Alain Menu and Aron Smith to claim fourth.

With Plato leading home Turkington again in race two, it was this time left for Menu to join them on the rostrum after the Swiss star attacked Jackson through Copse before completing the move at Becketts shortly after the mid-distance stage of the contest.

The second race also saw one of the biggest accidents of the season when Rob Collard’s BMW barrel rolled several times before coming to rest upside down. The incident was sparked after he'd made contact with Jack Clarke’s recovering Ford Focus, which was in the midst of a high-speed slide on the exit of Becketts. A shaken and winded Collard was taken to hospital for precautionary X-rays but was released later on Sunday evening.

One of the most incredible touring car battles in recent years then played out when no fewer than five former BTCC champions went doorhandle-to-doorhandle in a bid for a podium finish in the final race.

The race win went to the impressive Jackson – his second victory of the season – as the Motorbase driver nipped by team-mate Fabrizio Giovanardi in the early stages. Smith followed suit to claim a lonely second place while the epic scrap ensued behind.

Turkington eyed every opportunity to get past Giovanardi before finally making a concrete attempt at the end of lap 19, which launched a sensational sequence of events.

Giovanardi and Turkington touched while running side-by-side across the start/finish line, as the VW of Alain Menu also joined the fray. As the two squabbled over the same piece of asphalt Menu cleverly wedged his VW up the inside of both of them and into third place through Copse.

They were three abreast on the run down to Becketts before Plato made it four former champions in the fight. Plato’s MG then made contact with the rear of Turkington’s BMW at the tight turn, which speared the Ulsterman’s machine into Giovanardi’s Ford Focus. The Italian impressively saved the car from a wild slide but not before he had been bumped down the order.

It was three-wide again down the Wellington Straight with reigning champion Andrew Jordan now looking to join the party. As the cars roared into Brooklands it was Turkington who emerged in third place immediately followed by Plato, Menu and Jordan. The quartet were eventually covered by little more than a second as they finished the race.

The fallout from a fantastic weekend at Silverstone is that Turkington now holds a 50-point advantage in the Drivers’ standings over Plato and the two will now duel it out for the coveted BTCC title at Brands Hatch next month.

MG KX Clubcard Fuel Save is in the driving seat of the Manufacturers’ championship with Plato’s dynamic double extending its lead over Honda Yuasa Racing to 28 points.

Turkington and eBay Motors have now moved into unassailable leads in the Independents’ drivers and teams tables.

Jason Plato said: "I've been in a fighting mood today and it was great to take those two wins. It got a bit saucy in race three today but it was a really great battle! I had to look after the soft tyres to begin with but when I saw it getting feisty up ahead I decided it was time to go for it. As it all kicked off into Maggots/Becketts I got a good run on Colin but I just couldn’t get enough of an overlap. Looking ahead our focus now is to win the Manufacturers’ title for MG and that means that both myself and Sam have to finish all three races at Brands Hatch. I’m going to go out there and try and win more races, but realistically the gap in the Drivers’ standings is too big."

Colin Turkington said: "As we all thought it’s going to go down to the wire! I managed to get three strong finishes today which is exactly what we needed to do. While races one and two were clean it was a real battle in race three from start to finish. I had the pace to get past Giovanardi but he drove a good defensive race and where I was strong he made sure there was no way through. Then it all started kicking off into Becketts – I was trying to give everyone a wide berth but there was still some contact. I was so pleased to get the eBay BMW across the line, especially ahead of Jason! We’ve put ourselves in the best possible position going into Brands, we just need another weekend like this one where things go our way."

Mat Jackson said: "What a brilliant day! We’ve had the pace all weekend – we were only a tiny bit off in qualifying on Saturday so to come away with a second win of the season is fantastic. After the first lap it was pretty much perfect. I got a blinding start, which I didn’t expect because of the oil on the track in front of my grid box, then Fabrizio had a couple of oversteer moments and I was able to make the move stick. The car is getting quicker and quicker, so the aim for Brands Hatch is to get back onto the top step of the podium."

Alain Menu said: "It’s been a really fantastic day. We made improvements from race one to race two which made a lot of difference. It was a good fair battle with Mat and a just reward with a first podium for the team on merit. When you look at what the guys have achieved in such a short space of time it really is incredible. It’s a big credit to Warren Scott [Team Owner]. It’s another weekend without problems – I should have had more of them earlier in the season but we had some bad luck. It was a big battle in race three – I was third at one point! I’m here to win though, it doesn’t matter how big the battle it’s not as good as winning."

Aron Smith said: "It was a really good weekend – I was aiming for three top sixes and we achieved that so I’m happy. The last race was great – we’d had the pace all weekend to be at the front so it was really a case of being consistent, getting the points and cracking on with it. It’s great to be up at the front because you don’t get involved in scraps and you can show your true pace. Mat got the jump on us at the restart but from then on we matched him the whole way. With Alain on the podium in race two and all four of our cars in the top ten in race three, I don’t think there’s much more we could ask for! I love Brands Hatch GP, it should suit the car and we should be quick."

The final stop for the 2014 Dunlop MSA British Touring Car Championship will be at Brands Hatch on 11/12 October.