2013 new season teams and their drivers are ready to take on the 2013 British Touring Car Championship battle. 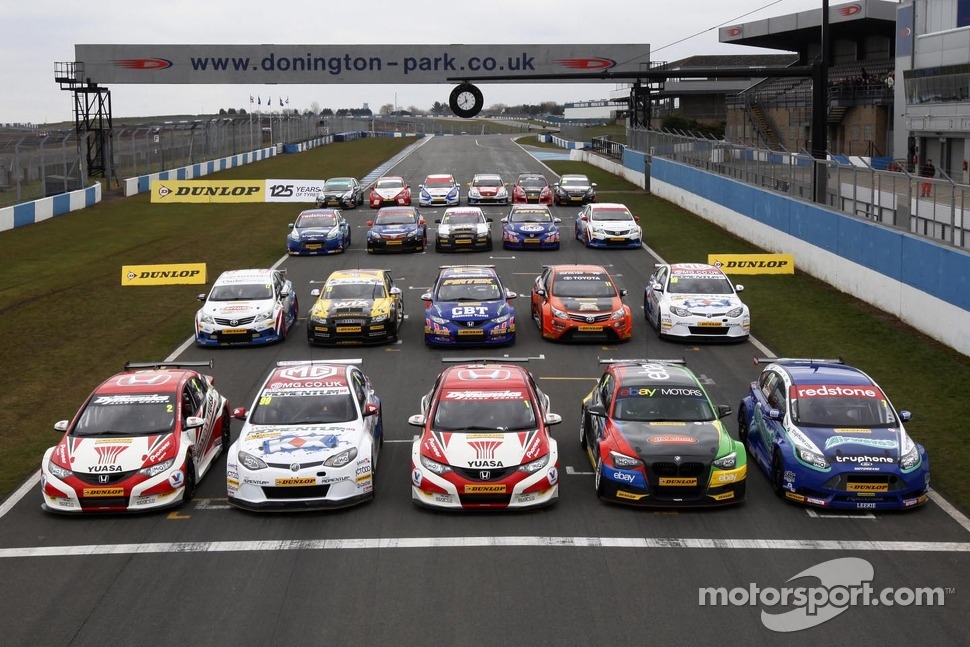 The 2013 Dunlop MSA British Touring Car Championship was officially unveiled during the annual media day this year held at Donington Park, where it was revealed on the entry list that this year will a record capacity grid of 32 cars will be competing.

Honda, MG, Ford, BMW, Toyota, Audi, VW, Vauxhall, Chevrolet, Proton and Seat will all be represented on the grid with 13 different models, 15 if you include that there will be Ford Focus’ and Chevrolet Cruzes’ both represent in NGTC and S2000 specification.

Leading the entry will be Honda Yuasa Racing as they will attempt to win a Hat-trick of triple titles. For the fourth consecutive year reigning BTCC champion Gordon Shedden will be paired alongside triple BTCC champion Matt Neal where both drivers were on hand to take the covers off their stunning new liveried Honda Civic. It was unveiled that as champion Shedden has taken up the option to run with the coveted number 1, the first time he is to run another number after running with number 52 since entering the series in 2006 with team mate Neal running number 2 after clinching runner up spot during the final race of 2012.

Honda’s biggest challenge is certain to come from former double BTCC champion and the most successful driver in the series history Jason Plato in the works Triple8 prepared MG KX Momentum MG 6. Plato will be joined in the second MG by former Clio cup and Porsche race Sam Tordoff who competes in his first full season after previously competing in a one off race for Triple 8 back in 2010. Like Honda, MG took the wraps off a completely re-liveried car for 2013 where Tordoff will run number 88 with Plato continuing as number 99.

Both Honda and MG will be pushed hard by a number of front running Independent teams lead by current Independent drivers champion Andrew Jordan for Independent teams champions Pirtek Racing. Jordan will be joined once again by Jeff Smith who for the first time will run in a near identical Pirtek livery as Jordan. There was better news for the team on the eve of media day after Pirtek announced they will continue with the team till after the 2015 season.

Other leading contenders come from a pair of Airwaves Racing Focus’ of Mat Jackson and Aron Smith, eBay Motors in their brand new BMW 1 series driven by returning 2009 BTCC champion Colin Turkington where he will join regular driver Rob Collard and Nick Foster and the 4 Toyotas belonging to three different teams; must notably in the hand of double race winner from last year Dave Newsham who joins Speedworks for 2013 and the winner of the final event of 2012 Frank Wrathall for Dynojet.

The big news of the day was that Ollie Jackson will drive the second Speedworks Toyota Avensis alongside Newsham. Last season’s AmD Tuning driver Jackson had resigned himself to a year on the sideline but a late deal concluded only the day before at a motorway service station see’s Ollie Jackson return for 2013.

Lea Wood had been expected to run for the team after testing for Speedworks in Portugal but he couldn’t quite raise the budget and on the eve of Media day instead announced that he will return with his S2000 Vauxhall Vectra from last year as he will become one of six drivers hoping to win the Jack Sears Trophy.

AmD Tuning who will also run James Kaye in their regular VW Golf had on display their newly acquired S2000 Ford Focus from Motorbase. The car appeared in an all white livery with an AmD sun visor although as yet the car doesn’t appear on the entry list with no driver yet announced.

Motorbase have at last confirmed that Liam Griffin will run his S2000 Ford Focus under the name of Addison Lee Motorbase, the company which Griffin is managing director of, while Michael Caine’s name appears at the wheel of a third NGTC Airwaves Racing Ford Focus. Caine has been a Motorbase driver for many years competing in the Porsche cup and British GT champion as well as having competed in 2 BTCC meetings for the team in 2011. It is not known when the third car will appear but Caine will run number 4.

Andy Neate’s new IP Tech Race Engineering has confirmed that they will enter a second NGTC Chevrolet Cruze sometime during 2013 and the team will run under the name of Team Club 44. Sadly Neate also confirmed that despite being confident of having the car built prior to the first event he is set to miss the Brands Hatch event by “wanting to do things right” and will instead enter the series from Donington making sure he has had some testing prior to the event.

Chris Stockton is also set to enter a similar NGTC Cruze to Neate but run by his BTC racing team but like Neate it is almost certain set to miss Brands Hatch after not being present at media day.

Finally Tony Gilham has confirmed that his 4 car team for the coming season will be run under two different names. The VW Passat team of Tom Onslow-Cole and Howard Fuller will be run under the name of PPCGB.com/Kraftwerk Racing with the Vauxhall Insignias, belonging to reigning Clio Cup Champion Jacks Goff and former Formula Ford champion James Cole, called RCIB Insurance Racing.

Neither the Passat or the Insignia were present but lead driver Onslow-Cole confirmed that his car is close to being finished and looks “awesome” but the team couldn’t justify unveiling a car which couldn’t run and lose two days work, instead focusing on getting the car ready which the team is adamant they will for the opening race weekend in just over a week at Brands Hatch on the 30th/31st March.