It was a weekend of ups-and-downs for Rotek Racing’s Robb ‘Hollywood’ Holland in the Dunlop MSA British Touring Car Championship this weekend at a weather contrasting Oulton Park (7-8 June).

Following a heavy crash at Donington Park in April, the Rotek Racing team were tasked with rebuilding the newly acquired Audi S3 Saloon in time for the fourth meeting of Britain’s premier race series.

Saturday’s (7 June) qualifying was held under wet conditions due to a pre-event downfall, which produced unpredictability and excitement to the 30-minute session.

Holland struggled with the conditions and positioned his Audi 27th.

In complete contrast to Saturday’s events, Sunday’s opening race was held under sunny and warm conditions and gave drivers their first opportunity of the weekend to run on the Dunlop slick tyres.

Bolting off the line as the lights went out for the first time of the weekend; Holland climbed three positions on the opening tour of the 2.69mile International Circuit and was quick to latch onto the rear bumper of Martin Depper. 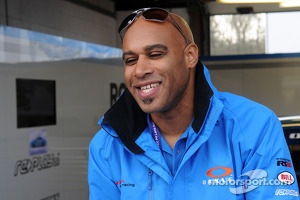 The American-driver continued to battle with some of the more experienced racers in the field and crossed the line 22nd, five places up from his original starting position.

For race two, Rotek Racing and Holland had implemented several set-up changes to improve the performance of his Oakley-liveried S3, which paid dividends when he again continued to climb the leader board to finish the session 22nd after battling with double championship winner, Fabrizio Giovanardi.

With the set-up changes working wonders for both team and driver, race three was shaping up to be a positive outing, but minutes before the session, the heavens opened and washed away any previous rubber laid down by the day’s previous events.

With plans now thrown out the window, Holland lined-up 22nd equipped with wet weather tyres and immediately sprinted off the line and into Old Hall Corner for the first time.

With a lot of water spray emulating from the drivers, visibility became a problem as several drivers collided with each other and in turn thrown off the track and into the barriers.

Holland kept his nose clean and was rewarded handsomely when the field crossed the line for the first time, the live timings recorded that the Nürburgring veteran had climbed ten positions.

Having previously struggled with the wet conditions during Saturday’s Free Practice sessions, Holland took to the track like a duck to water and was in line for a season best finish, but a driver behind suffered a mechanical issue and collided with the rear of Holland’s Audi.

Initially the Rotek Racing driver was able to continue, but the flailing rear bumper damage caused a tyre to fail, which in turn sent him into a high-speed spin at Cascades and into the barriers.

Holland’s race had come to a premature end, but there were many positives to take from the weekend.

“It’s been an up-and-down day,” said Holland. “We were looking to make progress in terms of set-up changes we were making throughout the day and started race one with a car that wasn’t quite on the pace, but we were expecting that. We wanted a baseline to figure out what needed to be done for race two and three.

“I had a good start and race in the second round as the changes really made the car come alive, which pleased me immensely as we ran our fastest laps of the weekend. We were substantially quicker and were lapping within the one-minute forty-fours, so I was really looking forward to taking that to the third and final race, but the heavens decided to open and throw all our plans out the window.

Holland continued: “Race three was a case of survival, which we did really well on the first few opening laps. We had moved up ten places on the opening lap and I was really happy with that, but unfortunately after the safety car, someone locked up behind me and shunted my rear, which damaged the bumper and caused one of my tyres to fail at the high-speed, spinning me off and into the barrier. There’s no major damage, no was near as bad as Donington Park, so it should be a weeks repair and then we can go testing and get ready for Croft.”