Set For another Thrilling Season

The Dunlop MSA British Touring Car Championship is set for yet another thrilling season after the official unveiling of the 2012 season took place at the annual Media day, held for the second consecutive year at the home of British motorsport, Silverstone.

At least 24 turbocharged cars belonging to 14 different teams should take to the grid in just under two weeks at Brands Hatch. Leading the entry will be the two full works entries belonging to MG and Honda, whilst we will also see a further 9 marks on the grid belonging to Vauxhall, Toyota, Proton, Audi, BMW, VW and Ford.

On the day the big news included the announcement that Redstone will step up their sponsorship from last year with Motorbase to become the team’s title sponsor, while we will also have a new driver joining the series for Rob Austin Racing with ex Porsche and Clio Cup racer Mark Hazell piloting 1 of their 2 Audi A4’s.

However, all eyes were on the brand new MG KX Momentum Racing team who unveiled their brand new MG6 built to the Next Generation Touring Car regulations. Built by Triple 8 the team had just 10 weeks to design and build the car which was presented to the media in the morning. The car briefly took to the track for the first time being driven by lead driver double BTCC champion Jason Plato who took part in the morning’s tracking session, although the car wasn’t finished enough to take part in the afternoon’s official test session. 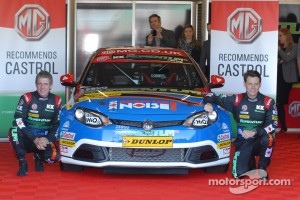 Exactly half the field will be taken up by the Next Generation Touring Cars with Honda being the other manufacturer to field cars to this format, where reigning BTCC champion Matt Neal will be hoping to take his 4th BTCC crown to equal the great Andy Rouse’s record. His biggest challenger could in fact be his team mate Gordon Shedden who hopes to go one better than runner up position from last season, while another threat could be from Andrew Jordan who is in the same NGTC Civic as Neal, as it is also built by Team Dynamics for his Pirtek Racing team with Jeff Smith once again racing alongside Jordan.

Another NGTC car to look out for will be Frank Wrathall in his Dynojet prepared Toyota Avensis. This will be Wrathall’s second season in the Avensis after the 2010 Ginetta champion took four outright podiums last year during a hugely successful second half of the debut season. Last season’s Ginetta Supercup champion will also be on the grid this year with Adam Morgan at Speedworks who received the drive as his prize for winning last year’s title. Tony Hughes will remain in another Speedworks Avensis for his second season.

Despite Wrathall’s success last year, the driver who perhaps came closest to becoming the first to win a race outright in an NGTC car was Rob Austin, in his own prepared Audi A4. Austin will continue to run a two car team with, as already mentioned, Hazell taking one of the seats. It’s unsure whether Austin will be at the wheel again this year or whether this will be Chris Swanwick who raced the final two rounds for the team last year and tested the car again today along with Austin and Hazell.

The final two NGTC cars will be driven by Dan Welch in his totally revised Welch Motorsport Proton and John Thorne in his own prepared Thorney Motorsport Vauxhall Insignia. Thorne had hoped to race the final race of the season last year but was restricted to just a handful of formation laps. He should be joined by a second Insignia at Oulton Park by Rob Hedley.

With many of the top teams having switched to NGTC cars are struggling for reliability and lack of running, surely some of the teams using the older S2000 chassis with Turbo engines must think to have a real chance of outright glory. Particularly while the NGTC teams get up to speed. 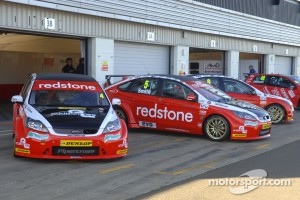 Leading the charge will be the newly named Motorbase Performance team Redstone Racing. The Mountune engine which they use was widely regarded as one of the best engines last year, and lead driver Mat Jackson came close to winning the outright championship last season before a dreadful two meetings where he scored just 1 point for fastest lap in 6 races. He will be joined once again by Liam Griffin with 2011 Clio Cup runner up Aron Smith joining the team following a one off meeting last year with Triple 8.

One of the most formidable driver line ups must surely belong to eBay Motors (West Surrey Racing) with Rob Collard, Nick Foster and Tom Onslow-Cole. This year the team has switched to a new turbo engine prepared by Neil Brown, the same people behind the Honda engine. With this new added life to the proven BMW, wins and a championship challenge is definitely a real possibility.

One of the surprises of the season could be Dave Newsham who has switched to ES Racing, who are running last season’s Triple 8 Vauxhall Vectras. This marks the second season in the big time for the 2010 Clio champion and after running for Geoff Steel Racing and Special Tuning Racing last year. Newsham already has surprised the field after topping today’s official test session in the afternoon after an encouraging first test for the team at Brands Hatch last Thursday. Team Boss Chris James is out in the second ES Racing Vectra while there will be a third Vectra out belonging to Lea Wood who announced Binz as title sponsor today for his Central Group Racing team.

The final two cars on the grid belong to Ollie Jackson and Tony Gilham. Ollie Jackson will compete in his first full season for AmDtuning.com in the hugely popular Golf, following Jackson competing in the final two meetings of the year last year for Triple 8. Gilham has managed to secure Shedden’s Civic from last year and will race in his famous Green and Pink colour scheme for his own team under the name of RCIB Insurance and HARD. 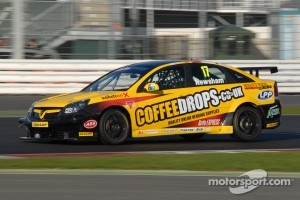 Sadly, you will notice two teams which are not present on the grid currently belonging to Special Tuning Racing and Tech-Speed. Special Tuning are mainly focusing on the World Touring Car with regular driver Tom Boardman. However, the team do have two spare Seat Leon’s and Boardman hasn’t ruled out making the odd guest appearance in 2012. Tech-Speed have been particularly quiet during the off season but it is believed that they have fitted the Toca Swindon engine to their Chevrolet Cruze and that they are not too far from securing a budget for the season. An announcement may come prior to the first race for regular drivers John George and fan’s favourite Paul O’Neil. There also might be another Chevrolet Cruze on the grid at some point this year with Richard Hawken and his Richspeed Racing. The team were hoping to run a single Cruze again powered by the Toca engine but have not yet managed to secure the budget following a sponsorship deal that didn’t materialize.