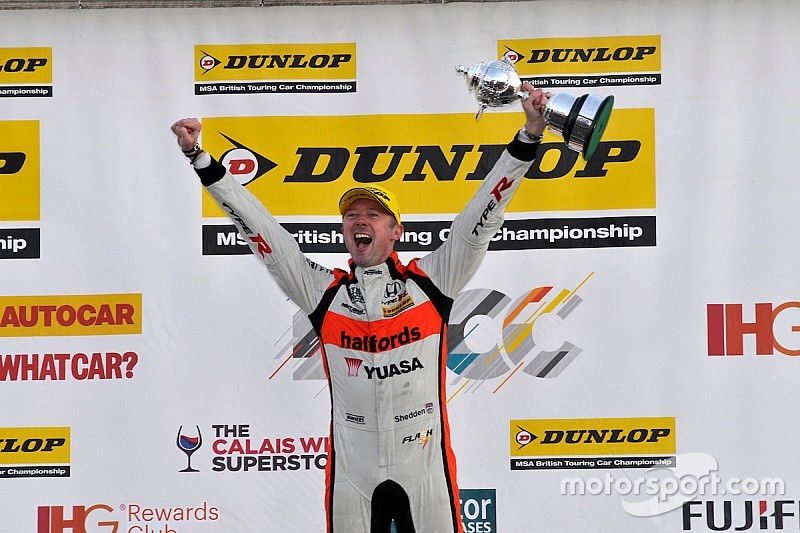 Gordon Shedden has reflected on the "incredible feeling" of winning back-to-back BTCC titles, after securing the crown in a dramatic final race of the season at Brands Hatch.

Third place in the finale was enough to give the Scotsman his third crown and a sixth drivers' title for his Team Dynamics squad, pipping long-time leader Sam Tordoff by two points.

Shedden knew he would need to overtake Tordoff to take the title, and made the decisive move just after an early safety car period, sliding his Honda Civic Type-R up the inside of Tordoff's BMW 125i exiting Clearways.

This was enough to tie on points and give Shedden the title on countback, but when Adam Morgan also passed Tordoff, it gave Shedden a two-point buffer over his chief rival.

Speaking after he collected the championship trophy, Shedden said: "There has to be an easier way to do it! This weekend Sam's driven well, but I just knew if I chipped away I'd have half a chance.

"The car was mint in the last race. I've tried to race forward all day and all year. I've made moves, I've stuck my neck on the line and I needed every single one of those points in the end.

"When I passed Sam I knew exactly what I was going to do. He was sliding around a bit, so I thought 'keep it smooth and we'll be OK'. Then Adam had good pace, and I thought I could do without him getting involved!

"It's just unbelievable and it's an incredible feeling to do back-to-back titles.

"After Croft I don't think anyone would have put a fiver on me winning the championship this year. We clawed it back and kept to task. I've made some heart-in-mouth moves this year and I've needed every one."

The sporting Tordoff sought out Shedden to congratulate him on his title, with the winner offering a highly complimentary assessment of his rival's performance.

"Sam's driven well all year - it's hard to carry the 75kg [of success ballast] and he's carried it well," said Shedden. "Even in the last race he was fair - we've had clean racing all year.

"His time will come. It won't be far away, without any shadow of a doubt. He will probably go away from here tonight happy with what he's done this year. He'll have probably learnt some stuff for when he gets in this position again."

Thoughts will swiftly turn to the off-season and the preparation for another title defence, and Shedden said it was clear what the team would need to do.

He said: "A lot can happen over the winter. We will see what we can do - we will need to take more steps forward. We'll figure it all out, but we will have to go forward."

Tordoff gracious in defeat: "I lost to the better man"