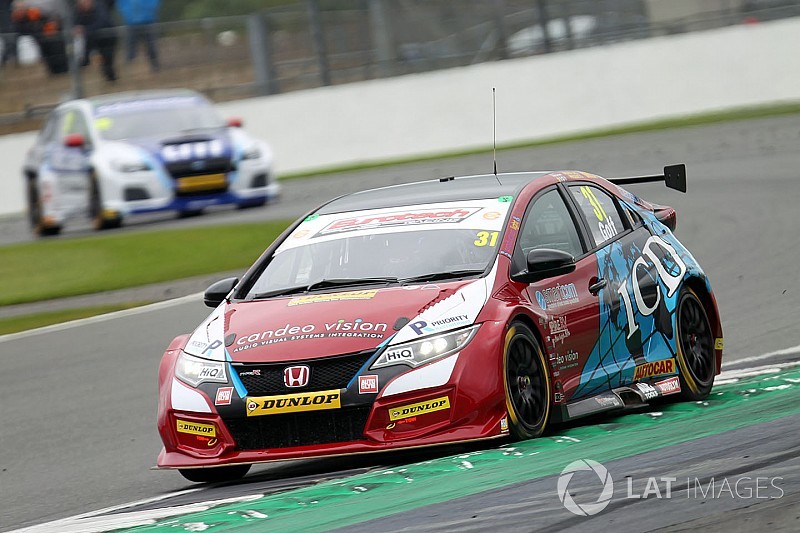 Goff stalked polesitter Tom Ingram in the opening laps and appeared faster than his rival, whose Speedworks Toyota was fitted with hard tyres and 75kg of success ballast for winning race one.

With a gap back to the third place car of Turkington, Goff pounced when Ingram ran wide out of Copse on third lap and slung his Eurotech Honda up the inside into Becketts.

The pair touched, as Ingram tried to close the door, but both survived and Goff scampered away from there to win by a convincing 4.910 seconds.

As Ingram fell away from the leader, he slowly fell into the clutches of Turkington and Sutton.

Ingram fended off the pair to the finish, but being bottled behind the Avensis ultimately cost Turkington third place as Sutton snatched the place on the final lap.

Team BMR driver Sutton feigned a move around the outside of Luffield at the end of the penultimate lap before slotting back in behind the hard-shod WSR BMW.

But Sutton then hung his Subaru Levorg around the outside of Turkington at Brooklands and, while Turkington attempted to close the door, Sutton held firm at Luffield and took the place after the pair made contact.

He eventually finished 0.175 seconds ahead of his championship rival, to extend his points lead back out to 12.

Rob Austin was fifth in his Handy Motorsport Toyota after a late charge through the top 10, finishing ahead of Adam Morgan (Ciceley Racing Mercedes) and the Team Dynamics Honda of Gordon Shedden.

Rob Huff stayed clear of trouble to claim eighth in his Power Maxed Racing Vauxhall in his second race as stand-in for Tom Chilton, with Dave Newsham - who will start the partially-reversed grid third race from pole - and Mike Epps completing the top 10.